We woke up today at 4:30 A.M. to climb Mt. Pignon. We drove to the base of the mountain, and then started our climb at about 5:20 A.M., guided by some of our Haitian friends. We divided into three main groups: fast, medium, and the leisure. The first group made it to the top in 62 minutes. The other groups arrived shortly thereafter. Once at the top, we all sat to enjoy the beauty of the sunrise and of the surrounding area. On top of the mountain, there was a 75ft. cell phone tower that several people climbed (some to the top, some part way). Although it was tiring, everyone had a good time and enjoyed the view at the top. We also spent some time in worship at the top of mountain…a high point for many today!

Top of the mountain view. 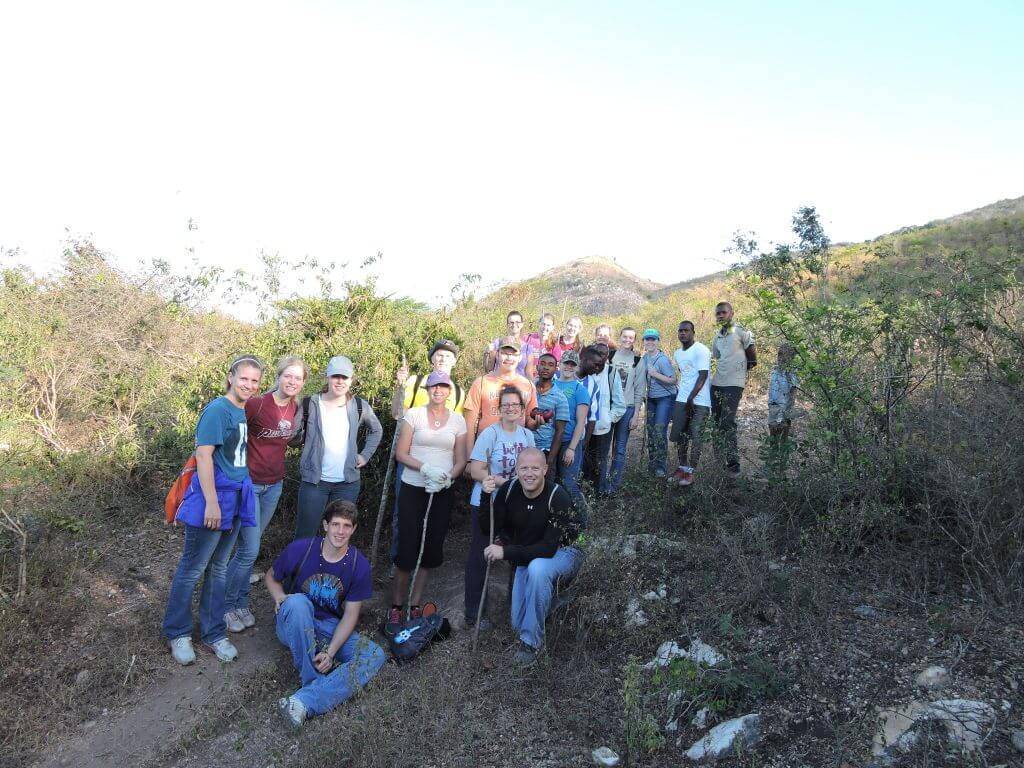 The whole crew at the bottom of the mountain.

After breakfast and a few hours of rest, we headed out to experience the Saturday market. While going through the market, some of us tried an ice cream treat as well as some fried akra. The market was extremely crowded as motorcycles and people fought to make their way through the crowd. Vendors were everywhere selling everything from clothes to live animals. Their meat, fresh and raw, was sitting out in the open. It was shocking to realize that this is a reality for the Haitian people.
About 3 P.M., we went out to a children’s Bible school program located near Pignon. The program was founded and led by a man named Jean Ronel. After some songs and introductions, we performed our Balaam and the Talking Donkey skit again. The kids had a blast and enjoyed laughing at our talented actors. Then we went outside for a short recess with the parachute and played with the kids. After a couple more songs and a short craft, we headed back home.

At the kids club!

Over the past couple days, some of the members of our team have been able to make the experience personal. Courtney has met with two of her sponsor children, and today, Jill and Keith met Jeuvelin. Last year, Jill’s dad brought a P.E.T. to this girl. My (Sophie) sponsor child hasn’t been found yet, but we are hoping they will find him. (Editor’s Note: We have learned that Sophie’s Thrive for 5 child has moved to San Rafael over Christmas.)

Keith and Jill found the little girl who received the P.E.T. last year, as brought down by the Pella P.E.T. makers and the Calvary team!

Our trip is now just over half way done. We have already made many great memories and have seen God in so many places. We’re excited to see what the last half of our trip has in store for us!