Final Day in Haiti – The Glory of God

This is written by Adam Shell and Ellie Bryant of the Central College Team in Pignon, Haiti.

Our group woke up early today to make the trip from Pignon to a resort that is near Port Au Prince. The drive was not like the one we made a week ago, in which we all piled into a van together. Instead, we were in two pickup trucks for the four hour drive. Some of us were in the back of the trucks with the luggage, while others were in the cab section of the trucks. Zeke, Ebens, and Cliff were Haitians that came along for the trip with us.

When we arrived to Haiti a week ago, it was the dead of night. Because of this, we were not able to see Haiti. This morning, however, we were able to see Haiti during the daytime. Simply put, it was beautiful. There were giant mountains, with clouds near the top. In addition, the entire country was a magnificent jungle (Levi Spain’s words, not mine). The thought of sitting in the back of the truck in the sun was a scary predicament at first. But it ended up being very enjoyable. Eventually, the sun got the best of me, and I had to go into the cab to take a nap. I then got to hear Tim Brand rock out to some Luther Vandross. 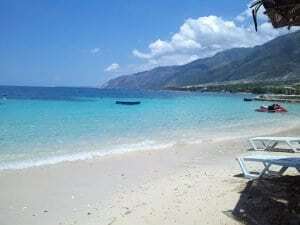 Our view today, as we spent time at the beach.

After seeing the scenic countryside of Haiti, we finally arrived at Wahoo Bay Resort. This resort has been a great enjoyment for all of us. The resort has a pool, a private beach, a small restaurant. First, most of us went to the beach. The ocean had some floating docks, and we spent a good amount of time hanging out and chatting on those. A man tried to sell Levi and me a few bracelets. When a conversation starts out with “How do you spell your name?” it usually mean they want to sell you something. Before we could say no, he had them made. Neither of us had cash though, so he was pretty disappointed.

After that, the group kind of split up. The Em’s,(who get to cuddle tonight at the resort) and the Tim’s (who don’t get to cuddle tonight) and Levi went snorkeling. They said that it was: Amazing (Levi); Breath-taking (Tim W.); Poppin’ (Tim B.); and the Emily’s were just speechless. I got the pool to myself for 1 hour, and it was quite relaxing. Following that, a few of us played cards and others relaxed, thinking about the amazing trip that had just finished. From there, we headed to dinner.

The Glory of God

This week has been amazing but also heart wrenching! I have been on an emotional roller coaster since we first landed. It was immediately a culture shock as soon as we got out of the plane. God broke my heart and just really began to show me His love for the world outside of my own little bubble. From day one even with the language barrier, which was very present, God was still so evident through smiles and manners even without spoken words.

As the week progressed God just began to speak to me and remind me that we were being Jesus to the people of Haiti. At first I forgot this because I was just so awed by the different culture and the poverty that was before me. But on the second day as we were walking through the streets and the little kids started to follow us, the picture of Jesus and the crowds that followed Him through the streets just hit me. They weren’t following us because they thought we were Jesus, but because they knew that we cared about them and would show them love, that maybe they had never been shown before.

As I was walking through the streets multiple times I had different kids ask me if one of the others from our group was my friend and I said yes, kind of with a laugh because to me of course the people I came with were my friends, but the next question the child asked took me off guard, he asked me, “am I your friend?” At first I was just taken aback and was unsure what to say. Then I said yes you are my friend, and the smile that shown from that face just filled me with joy and it made me realize why God brought me to Haiti.

A similar thing that happened Saturday brought me to tears. We were going around visiting different places, and an older boy who was about 14, he spoke a little English, was following me as we walked the streets. I had an indifferent and slightly annoyed attitude with him, because I knew that the only reason he was following me was to sell me a necklace, he saw me as a dollar sign. Or so I thought. When he finally got around to asking me if I wanted a necklace I just said yes, kind of hoping it would just stop him. And it did for a little while, until he brought me the necklace. I just expected him to disappear as soon as he gave it to me, but he didn’t. He stayed with me, and helped me talk to others and translate. He never left me for the rest of the day, and later that night when we were watching a movie out of the blue he just looked at me and asked, “Do you love me?” I immediately started tearing up because again I was reminded of Jesus and His love for everyone. “What you do for the least of these you do for me.”

We came to be Jesus to the Haitians, but that’s not all that happened this week. The Haitians were Jesus to us as well. I cannot even begin to describe how blessed I am by the relationships and stories that I have made and heard this week. The world is so much bigger than what we see in our own little isolated bubble, God is doing so much more then we realize.

I had the awesome opportunity tonight to just sit and chat with Zeke about life and Haiti and I feel so blessed to have been able to have that conversation with him. We chatted about life just going back and forth asking each other question. He asked me what my favorite part of this trip and Haiti was, and I told him it was the people and that I felt so blessed to have met him and Ebbens and Fransley and Cliff and Woodson and all the people in Pignon. He started to express his gratitude for us coming as well, and we both just looked at each other and nothing could describe our feeling better than the phrase, “Better Together.” It is so true; we would not have been able to do anything without one another. God is so amazing and can teach us so much through other people and cultures.

Finishing up the day today (Monday) from dinner on was just a blast, we all went down to the beach to watch the beautiful sunset together. Some of us went swimming and the rest of us went to play Ninja and a few other games. It was a chill night of just talking and sharing life! God is so good!

We will be on the road again at 6:30am and back in Iowa tomorrow night!