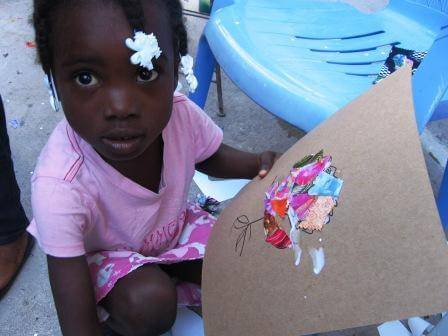 Today is my third day in Haiti. Not knowing Haiti means mountains I was surprised when I arrived and that was all I saw. However, everything in the country from the trees to the flowers to the people is beautiful.

Since I have arrived most of my time at the mission Etoile has been spent with the Girls Empowerment program. This is a group of young women between the ages of 16 and 25 who all aim to achieve great things in their country. Most of them want to be either nurses or doctors because that will enable them to help both their family and their community. The girls really enjoy school, chemistry and biology, but all agreed that English was their favorite. They also agreed math was their least favorite… as an engineer this hurt my feelings a little bit haha. Their biggest wish in life, like many Americans, is for success. When I asked one girl to elaborate on her definition of success, she said success is doing what she imagines for herself and being happy in her position.

Many of the girls’ questions for me were about my schooling and about my religious beliefs. One girl asked what I thought the best thing God has done for me. I responded without hesitation by saying he provided me with a loving family that has created many opportunities I may not have had when I was adopted. Another girl asked how I show my appreciation to my family for those opportunities, and I didn’t really know what to say, no one has ever asked me that and I guess the thought had not occurred to me. My friend that was translating said that I show my appreciation by being successful in school, and staying out of trouble, and getting a job, but I almost feel that those things are expected, not so much showing appreciation, so these girls have already been teaching me things.

Today the girls took me shopping in the market in Gonaives. I was very excited to ride a tap-tap there, which is like a cross between a bus and a taxi, and you tap the side when you want to get out. It was fun to go on an outing with the girls and they took turns holding my hand, leading me around, and showing me lots of dresses. Before we left I said I would buy them snacks so went to the store. They had cookies, juice, fruit, and so many other things. I personally would have gone straight for the Oreos. These girls got crackers, cheese, and cornflakes. It was Laughing Cow cheese, so it was delicious cheese, but still, NO OREOS. I couldn’t believe it.

Later the girls came over to hang out. After a little bit of awkwardness becuase of the language barrier situation, we sang some church songs and THEN it turned into a party. One girl started dancing, they all started dancing, and then they wanted ME to dance, and then they started laughing. I don’t think I’m a bad dancer for American standards, but apparently for Haitian standards it’s hilarious. Haitian dancing is like popping, but then sometimes it’s like salsa too, I felt like I was in Zumba class. But hey I tried, and the girls had a good time, so I think we bonded.

Overall, I’m having a great time in Haiti so far, I’m definitely going to need to come back.