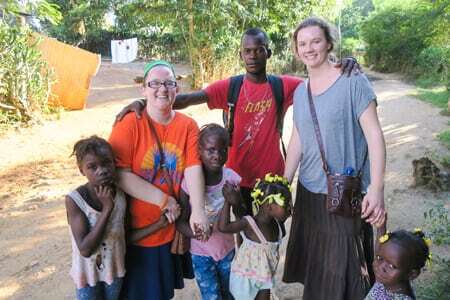 The Many Hands Thrift Market Team, along with trip veteran Tim Van Maanen, have begun their work in Haiti with home visits. Ken Landgrebe and Kayden share their experiences so far.

We left Des Moines bright and early, 630am, for Detroit, where we only had a 30 or so minute layover. The flight was a little late, but God is good and our gate in Detroit was only about 50 feet from where we exited, giving us plenty of time. From Detroit we headed to Atlanta where we had enough time for lunch before heading on to Melbourne, Florida.

Staying the night in Florida, the team had dinner and we retreated back to the Hotel, where something spectacular happened…..the Cubs won the World Series! As a lifelong Cubs fan, I couldn’t have asked for a better night.

We left early Thursday morning, on MFI, from Florida, after a short stop for fuel in Exuma, in the Bahamas,  we were off to cap Haitien where we went through immigration. Our last leg of the flight was only a few minutes. We landed in Pignon around 11am local time.

After lunch the team toured the campus. The new preschool was incredible and has to be one of the nicest schools in the area. The Many Hands campus never ceases to amaze me. After the tour of the campus, we did staff introductions. It’s always encouraging to meet and see the Haitian staff interact with each other. You can tell and see they genuinely love each other.

The team then walked around Sylvain, meeting families and children, and seeing all the concrete floors from the to Do Something Concrete project. It was absolutely amazing to walk and see almost every single home in Sylvain with a concrete floor. God is good!

Tim and Ken walking with a crowd in Sylvain

Kim and Micah with a local family

The team ended the day, after an amazing dinner (I love the food in Haiti), with devotions and processing.  Micah remarked how while the poverty in the area is bad, it wasn’t as bad as she expected.  The team talked about how these trips helped with the transformation process, by changing the way we see things (our truth lens).

After finishing this amazing cup of coffee this morning, we are off to pour a concrete floor! Pibon Ansomn !

On the trip is grade-schooler Kayden. This is his Day 1 perspective:

How do you think Haiti is different from where you live?
It has no TV.  I didn’t see any cars. There was lots of Motorcycles. The houses were made of sticks.

How did today make you feel?
Good, because I got to play with Haitian kids. It was sad because of how they had to live and some had no clothes. I was excited to get here.

How did you feel about the different language?
I was able to understand them and still be able to play with them.

What did you think of the food?
It was nothing like Americans food. It tasted funny but it was good.  My favorite food was the Chicken and fried okra. I hadn’t ever had okra before.

What did you think the first time you met Jerry (sponsor child)
He was chubby. He was little. His grandma was nice.

What did you think about the plane ride?
I like the MFI flight. I like landing in the grass field. I rode in 3 different planes. Then the MFI plane (DC-3)

What are you looking forward to doing?
Giving presents to Jerry (sponsor child), playing with the kids and Liz.