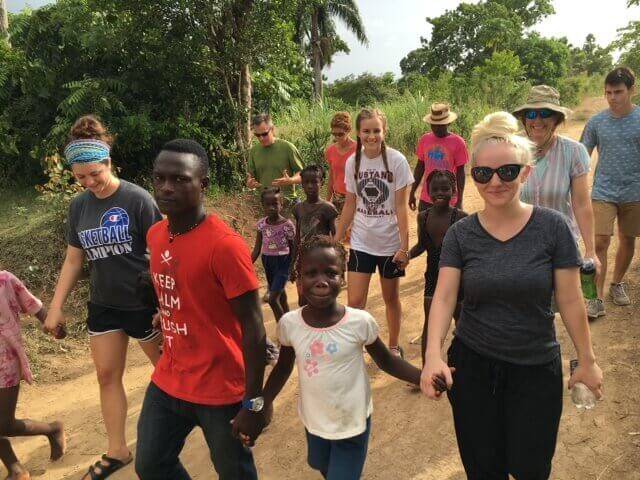 Kim Buck with Lutheran Church of Hope (LCH) shares the impact Haiti has on their first day.

Hey everybody, I am pleased to announce we have safely (though albeit sweatily) made it to Pignon! We woke up bright and early at 4:45 AM Eastern time to a Floridan hotel breakfast, stuffed our faces with the last “American” meal of our travels, and loaded up onto the bus, bleary eyed and tentatively excited for what was to come. We arrived at the Missionary Flights International hangar at around 6:30 AM, where we got collectively weighed on a scale (a grand total of 2,105 pounds) and were sent on our way. The pilots were incredibly skilled and maneuvered our take offs, landings, and turbulence with ease. We left the U.S. at around 7:30 AM, and I swear it was 9:00 for three hours as we switched from time zone to time zone.

Walking out to the MFI plane Our MFI pilots

After stopping in Exuma (Bahamas) to fuel up and in Cap Haitien for customs, we finally landed in a field about twenty minutes from Pignon. As I looked out the plane window throughout the flight, I saw everything from sapphire blue waters and tourist resorts to a Haitian woman turning with water balanced on her head to watch us fly by. Nothing, however, compared to the welcome party awaiting us outside of the plane when we finally touched down. Of course, most of them were there for the cargo, but nonetheless I was in awe of the amount of smiles and friendly people that greeted us as we trudged down the steps and into the Haiti humidity. Craig and Christi, as well as the rest of the other members of the Many Hands for Haiti team, were so welcoming and I am so thankful for that. Any nerves that came with traveling to a third world country were completely diminished when I saw how easily everyone from MH4H interacted with one another, with us.

The ride over to the campus in the back of the truck is one I will never forget. Though the road was bumpy and the bench was packed, I couldn’t wipe this inexplicable grin off of my face. Everything is surreal here, both beautiful and painful to see and experience.

We arrived at the Many Hands campus at 11:30 AM Haiti time, just in time to unpack before a light lunch. At around 1:00 PM we went and met the Haitian MH4H team, all of whom thanked us for being here and welcomed us with blessings and excited smiles. Heidi and the other women who are running the Thrive for Five program were so inspiring as they stood there, arms and hands linked together in a show of obvious support and love for one another. Haiti continued to amaze me as stories of love and grace continue to be written and unfolded to us.

After the meeting, Christi surprised us with a challenge: ordering groceries at the Haitian market by using creole we would learn on the way there. Now, I don’t know how you handle learning a new language, but in the back of a moving truck with the wind whirling around and blurring the words together is not my most ideal learning environment. I walked away knowing that “Pwa” means beans, and was, as far as Devenel (our Haitian translator) was concerned, a lost cause as a Creole student. However, though the language still proves to be a barrier we all feel poignantly, the Haitian people are kind, and very willing to put up with our stumbling words and exasperated English.

Shopping at the market!

Walking around the Haitian market made me sick to my stomach. And not because of any weird smells or unfamiliar sights, but because the people are so real, as funny as that sounds. They aren’t just pictures, or book characters. Poverty is not something I can claim to have ever experienced, even as a “poor” college student. I felt sick because of how out of place I was, encroaching on their lives and experiencing what they experience daily in the form of a trip. Even as we are out here roughing it, the time we will spend here is very temporary. The time we spend here is going to involve coming back daily to a concrete building, electricity, good food, and running water. I am spoiled, even as I sit here with mud plastered to my feet and dried sweat smeared everywhere. I am humbled. I am blessed. I am so repentant for my ungrateful heart and sheltered lifestyle. Though I do not feel shame or guilt for the gifts God has presented to me, I am reminded every second I spend here that I have not been treating them with respect or as though they have value. For that I feel guilty, although I know my hardened heart has already been forgiven.

Haitian boy on a donkey

After the market, we went on a walk down the rutted road and through the “town” of Sylvain. And boy, I have never encountered joy like that before. There were adults smiling at us and watching us, waving and shouting “Bonswa!” as we passed. There were children running to catch up to us, without shoes, without clothes, grabbing onto our hands like we were lifelong friends they hadn’t seen in ages. As we walked, our company grew, and so did the amount of joy radiating from both us and the kids who tagged along. As I held the hands of two girls and skipped along the broken road, I felt peace. Peace beyond understanding that rose even in the face of the uncertainty of simply existing and being in Haiti. That was the best part of the day, for me at least.

Walking the roads of Sylvain

When we returned from our walk, which we cut short because of the threat of rain, we could not believe it was only 4:30 PM. We had an hour until dinner, where half of us spent some quiet time in our rooms and the others played soccer and did other activities with the kids that were on the Many Hands Campus.

The people of Pignon are so joyful

Dinner was DELICIOUS. It was a bunch of new flavors and textures which brought the tastebuds to life. I am delighted to say that I love Haitian food. God bless those cooks, they’re incredible. I’m sure this will be a fantastic week, based on the food alone.

After dinner we had some more down time where we did some small tasks and played with a puppy until we finally wrapped up the night with devotional time.

I’m so excited for what this week has in store for us. As I sit here listening to music being played in the distance and the voices of those that have led me to this place, I can’t think of anywhere else I want to be.