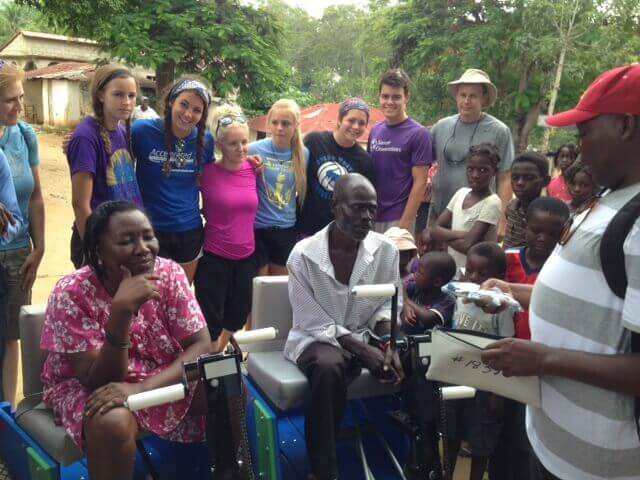 Kenzie Sellner with the Lutheran Church of Hope team in Des Moines, IA shares their Saturday’s adventures and blessings.

Today was definitely full of adventure! Our team started our morning out by being up and ready to go at 5am. Everyone felt a little groggy as it has still been difficult getting our sleep patterns adjusted after all the travel and on top of that; spending each day in the energy-draining heat.

We all loaded up in the bed of the truck in long pants and long sleeves, each with a bottle of water, and headed to the mountains. When we arrived at our starting point we all hopped out of the truck and started trekking along behind Christi, who has made this hike too many times to count, and is nothing shy of a pro.

Naturally the group began to divide into two groups: the fast group and the group who was pacing themselves! Some of our Haitian staff came along to help guide our way to the top. Personally, I found the hike to be a great test of physical and mental strength and definitely required a few rest breaks. But that’s what made it all the more rewarding when our whole team made it all the way to the top! When we reached the top there was this small concrete building with a tiny metal antenna that we all climbed on top of, then sat and just soaked the BEAUTIFUL view in, and relished in our pride for making it of course.

The trip down was definitely less physically exerting, but much more dangerous. I think we all took our turns at one point or another having to catch ourselves as the rocks literally slid from underneath our feet. It’s fair to say we all got a really good quad workout in as we had to stop our momentum and resist the downward pull. On our way down we spotted a woman balancing what was probably a 50 pound bucket of rocks on her head. One of our team members, Justin, helped by carrying the additional bag full of rocks she was carrying at the same time and walked them to her house which was right down the road from our trail. Afterwards, we loaded back into the truck and made a quick stop back at our house for a change of clothes.

The team loaded the truck up with two PET carts (Personal Energy Transportation, similar to a wheelchair, but made for more uneven terrain) that we were delivering today. And we all still managed to fit into the truck with them by sitting on top of the boxes and holding on for dear life. We made a quick visit through the Saturday market which was so crowded and overwhelming and looked like something straight out of a movie. We saw everything from women selling fruits and clothes, to men making and selling machetes, to goats getting their heads chopped off, and children sucking on the bones from the goat’s rib cage. We didn’t buy much at the market besides bread and a bag of kanép, which is a small fruit unlike anything I have ever had before, with very little taste. Before long it was time to get back on the road.

The ride out to the community that we were delivering the PET carts to was about an hour and a half drive, but not your average drive! Thankfully we have a rock-star driver, Pouchon, who was able to maneuver his way through most of the deep holes in the roads and mud puddles. I mean, seriously, the ride was worthy of being a roller coaster at Adventureland. There were only a couple times that we all had to get out of the truck and watch as he gunned it through what looked like impossible territory for a vehicle our size, yet somehow he managed and was congratulated with all of our cheering and applause each time he was able to make it through! The ride out there was almost as fun as the actual mission for the trip out there.

When we arrived at our destination, we instantly realized how much our trip out there meant to the family and their community for the two individuals who were selected to receive these carts. They had thrown a party and used any and all decorations that they could throw together, including little paper cut-outs hanging decorations and balloons that said anything from “Happy New Year” to “Happy Birthday” including a hand made banner that said “Welcome Many Hands” it was honestly so humbling and beautiful to walk into. The family greeted us with a short introduction and a speech of their story as our new friend Jean Robert, translated for us. The family all continued to welcome us while other staff members were ripping open the boxes and assembling the carts.

As the two recipients that day sat in their new PET cart they lit up, you could tell they weren’t used to smiling, but you could see the joy that was tucked behind their eyes. They received quick lessons on how to operate their new gifts and the children began RUNNING alongside them with such excitement and laughter and cheerful encouragement. It brought tears to my eyes to see how much the community all cared about each other and how selflessly grateful they were for someone around them to be receiving such a blessing and improvement to their lives.

Haitian woman learning to use her new P.E.T.

Everyone wanted to take pictures and continued clapping and cheering as the recipients became more comfortable with operating the carts and learning how to steer them. We couldn’t stay long as there were rumors of rain, so we packed back up and waved to everyone while we drove away until we couldn’t see them anymore. Sure enough, about an hour into our bumpy ride back into town it started to downpour. We had no choice in the back of the truck but to embrace it as everyone else was running for shelter. Families on the sides of the roads were looking at us as we were getting drenched and were cheering us on, it was actually pretty fun and made it even stronger of a memory! About 5 minutes after we arrived back to the house, it of course, stopped raining! We all headed straight for the showers to rinse all the dirt off of ourselves and rang out our clothes and hung them to dry.

Muddy roads make for a challenge!

We were greeted by the dinner bell shortly after and we all came to sit down and enjoy some Haitian spaghetti! We finished off the night by choosing a song and practiced singing it as we will be singing for the church service that we attend tomorrow morning. Everyone’s hidden talents came out of the woodwork as we discovered that between the staff and team we have a violinist, a pianist who will play on the keyboard that we will bring with us from the house, and a couple guitarists! Overall, it was another amazing and rewarding day.

P.S. Christi saved Devenel’s life today when he almost fell off of the truck. And in other news Justin had the pleasure of sharing his shower time with a tarantula,  that once he discovered- he screamed and ran out of the bathroom and came back to kill with a wooden plank. But we’re all okay now =) Now excuse me, I’m off to bed because I’m exhausted and the bed is calling my name.