Greetings from Pignon!  Monday ended up being “kid day” as we experienced joy and laughter with many children around the area.

In the morning we spent a few hours at Pastor Francois’s orphanage, playing with all the kids. We discovered that there is no language barrier in “playing outside” as we did everything from soccer to jump-roping, from flying kites to tossing frisbees and balls. We just met each kid where they were, whether they wanted to play, blow bubbles or just be held on someone’s lap to watch all the excitement. 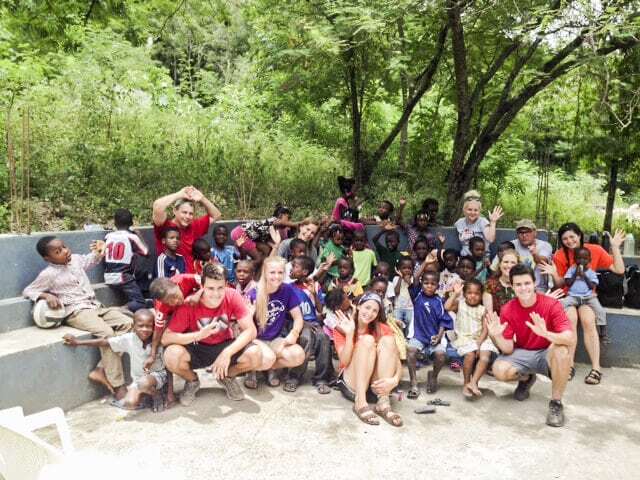 A few of us split off from the orphanage to make a follow-up visit to a woman we met during home visits on Friday afternoon.  Kenzie, Hannah and I traveled by motorcycle with Craig, Davenel (our translator) and Pastor Lumanes to pray for a woman with a health condition.  The first day we met her, both Kenzie and I felt an instant connection and knew God had put her on our hearts. All three of us ladies took turns and prayed out loud as Davenel translated for her.

After a meaningful prayer time we rejoined the team at the orphanage just in time to hear the kids perform some songs for us.  And then we sang a song for them! (Who knew that the song we prepared for singing in church on Sunday, “Lord I Lift Your Name on High”, would be used again and again as we interacted with many different people groups!)

Singing with the children

After lunch back at the Many Hands compound, we went out to visit a youth conference that Appolon was overseeing in a nearby village. Again we sang our song for the kids, and what a delight as they sang the same song back to us in Creole! It was awesome to worship the same God through the same song, just in a different language.

After our music and team introductions, it was time to let the games begin on the dirt playground!  Fun is universal, and it was great to watch each team member in their element: Lauren with the girls jump-roping, Katie tossing tennis balls for a game of catch, Seth helping launch the kites, Justin playing catch, Hannah helping Christi lead a dancing conga line through the playground, Rick playing soccer, Ken teaching a boy how to throw a spiral with a nerf football, and Kenzie holding a little boy on her lap.

We played non-stop for a couple hours, then arrived back “home” in time for dinner, exhausted and covered in dust, but with hearts full of joy for literally being the “hands and feet” of Jesus for more than 100 children today.

Katherine Agey loving on the children

And yes, Zaya, Mommy had a whole entire day of sharing Jesus’ love.