Today was another eventful day. We started our day at 5 am this morning so we could make and wrap the sandwiches for the Color Blast breakfast.

Making sandwiches for the run and 5:30 am Early morning team bonding while preparing breakfast for 200 runners

Then we loaded up the trucks and went to a church that was also the starting point for the Color Blast. All the Haitian youth who were running in the race, met us there and ate the sandwiches we made for them.

We waited until it was only like 950 degrees outside to start the race. Makes sense right? Since most of our team is a bunch of wimps and whiny babies (just kidding, they are great!), we four girls were the only ones who actually ran in the race. The rest of them sprayed the color as we ran by. Overall, it was a super lit race. Like it was actually lit because it was so hot sauce outside.

And they are off!

There were 200 youth who were invited to be a part of the race with us, but more joined along the way. We all had matching tie-dye shirts to keep track of who was all invited to the compound for event and the lunch that followed. The race consisted of 5 color spraying stations and a really big hill. It was cool to see how excited the youth got over a race that was actually really hard to run because of the heat.

Colors of HOPE At the finish line

The finish line for the race was at the compound where we are staying so once everyone got to the finish line we all gathered at the MH Equipping Center where we listened to Mike speak about running the race of life. After Mike spoke, some local pastors spoke in creole to the Haitians to continue encouraging them in their faith. Once everyone was done speaking we listened to a couple of groups sing some songs in creole, but one of them was ‘We Believe’ by the Newsboys. We also served lunch to everyone and handed out bags with bibles and water bottles in them. 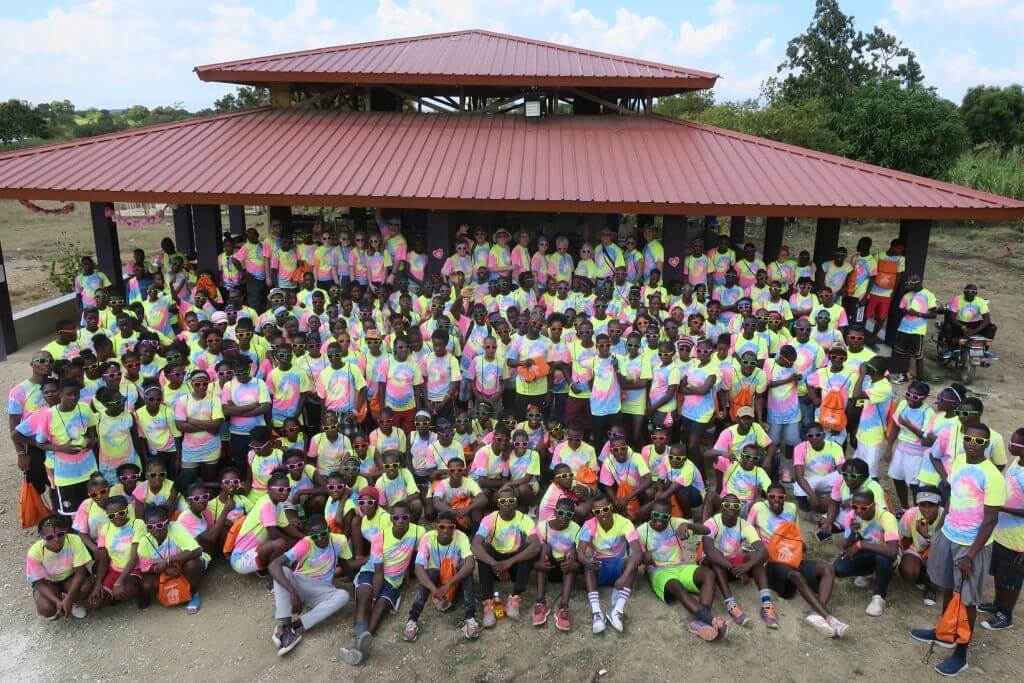 About 250 runners and volunteers total

Goodbye until next year Teamwork made for an amazing event

Once all the people left, Kurt, Christi, Abby, Rylie, Carli, and Brenna went to the local market. It was incredibly crowded and was quite the experience. We saw a goat head just chillin’ on a table with no fur. We also saw dead, dried out fish. As we walked through the market, most of the children yelled “blanc” at us, which means ‘white’. The amount of people there was absolutely insane. You could barely walk two steps without bumping into someone. While we were at the market, the remainder of the team stayed at the Many Hands campus and worked on the playground project.

After the market, we went back to the compound to pick up most of the team to go to Pastor Francois’ orphanage. We were able to play with the kids the whole time and it was eye-opening to see how many kids were orphans. It was really fun, but also hard because a lot of the kids tried to talk to us but we couldn’t understand them because of the language barrier.

Written by yours truly,
Rylie, Brenna, Carli, and Abby

You can catch up on the teams’ first day here and third day here.