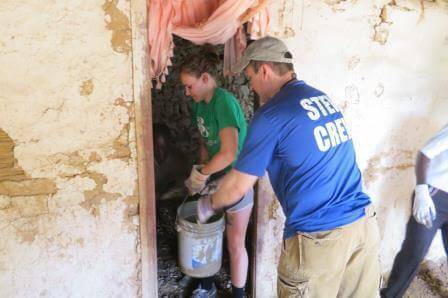 As we are getting more and more accustomed to this culture and country, God evidently asked us to listen to Him here in Pignon today. Our day plunged us deeper into this community: we climbed MountPignon, worked alongside a Haitian team pouring a concrete floor, explored a market in a neighboring town, presented five more families with food, and the girls had their hair corn-rowed. Through all the activities of the day, He called us to this rich, vibrant city to listen to the sounds and voices all praising Him.

A few verses that particularly exemplified today are Psalms 108:3-5. “I will praise you, Lord, among the nations. I will sing of you among the peoples. For great is your love, higher than the heavens; your faithfulness reaches to the skies. Be exalted, O God, above the heavens; let your glory be all over the earth.”

Nine of the twelve team members woke up and left very, very early this morning (Not early for Christi!) around 4:55 AM to hike up the mountain shadowing Pignon. It was a bit more than an hour before sunrise and still very dark and humid. The path started out wide and gravelly, but quickly narrowed to single file, with large boulders embedded in the earth for us to climb. As we rounded one bend, the leaders’ flashlights illuminated a donkey in the path, surprising us all. It started braying at us for at least two minutes but calmly sauntered off the path. We continued climbing and encountered a few Haitians tending gardens or charcoal pits. After conquering a stretch of steep incline and boulder climbing Christi dubbed “Pace Yourself Alley”, we came to a part of the mountain that was burned in a fire earlier this year. All of the bushes were charred sticks, and the edges of the yucca plants were singed. A long type of grass was growing between the jagged rocks, reclaiming some of the biotic beauty of the area. We reached the top in 52 minutes after traveling 1.38 miles and climbing 1280 feet in altitude, about 10 minutes before the sunrise. Photographs and breaths were stolen in those moments as we watched God paint a new day over the hazy, mountains of the Haitian jungle. Pignon is to the west of the mountain, so we climbed atop an abandoned concrete building, so we could watch the sunlight awake the city. Not long after all of us climbed onto the roof, a music of voices rose from the city. Incredible, angelic, spiritual, and amazing aren’t even words worthy of description of the sound. It was God. He was singing to us through them, praise and love passing us on its way to heaven.

The selfie stick was in use on top of Mount Pignon!

Unfortunately, we had to descend the mountain to continue with our day. We passed more gardening Haitians, greeting them with “Bonjou!”, Good morning! We passed goats, chickens, the same donkey (who apparently recognized us this time and didn’t bray at us), and two cows. Once we got more into the town, children were dressed in uniforms, walking to school. People were walking with a purpose to start their daily business and looking for rides north and south to neighboring towns.

A quick freshening up, breakfast, a walk later, the whole group arrived at a house close to the dormitory. This was the site of a new concrete floor and porch. These floors are critical to preventing diseases and conditions born of living on a dirt floor. The house had three rooms with rock, stick, and concrete walls and a thatched roof. The Haitian construction team mixed the gravel concrete there on site in a giant pile of sand and rocks by adding water. The slop was shoveled into buckets. Ken, David, Seth, and I initially helped with the full bucket brigade, while everybody else helped move the empty buckets or interacted with the family (and puppies!). The women held twin babies, to whom Katie and Lauren were glued the rest of the time we were there. We completed the project efficiently, and Seth was the Project MVP, working selflessly, tirelessly, joyfully, and by himself at the very end in the completion of the porch.

Many hands at work, preparing and laying a cement floor in a house.

Bucket by bucket, the floor goes from dirt to cement!

We took about an hour for lunch and resting; then traveled about 20 minutes by truck to a nearby market. Every Monday, many Haitians from the neighboring community of Bohoc bring their produce, goods and wares to the market space. It was a bit like the Iowa State Fair on the least busy day, but less organized and commercialized. They sold clothes, shoes, grains, vegetables, loose medicines, some packaged foods, candy, and other household necessities off the ground, in large pots, or in wheelbarrows. The ebb and flow of steady Creole reached our untrained ears, all while meandering through the small aisles between tents. There was a specific meat aisle where boiling blood and a severed goat head were the most astonishing sights. The cultural immersion was as raw as the meat for sale and as thick as the humidity.

On our way back to Pignon, we met with a school leader and friend of Craig and Christi named Jean Robert. He led us to five different families in need of food and prayer. All of them had small stick houses with thatched roofs that would collapse in any strong storm, but the smiles that light up their faces are rays of Jesus’ love in their hearts. Three of the five families were women with children. The other two were older married men with families of their own. One of the men crafted this musical instrument that he proudly played for us. The identifiable construction materials consisted of a shower head, traffic cone, desk leg, and coffee pot. He played it with such skill and joy as a master of such an instrument would; one could not help but see a streak of engineering brilliance and Jesus working through him. Jean Robert told us that he played it often during his church service.

This man received a food blessing of rice, beans, and oil. Annouspere and his handmade, musical instrument! This is the home of a 9 person family. The roof leaks and it is not the best of conditions. They were blessed with food today.

We traveled back to the dormitory and had some down time before supper. Some people napped while others read or journeled. I noticed some children in the street outside the gates with Kenzie, so I joined them, just hanging out. We talked and traded Creole and English words for a whole host of things. I taught them some clapping games, making music and laughter of our own.

On a whim after supper, some of the girls suggested that we have our hair corn-rowed like most of the girls do here. Craig contacted a girl, named Sankara who lives down the road that was truly a hair artist. She braided, twisted, and crafted Katie, Maddie, Mikaela, Lauren, and my hair into different designs while her friends came and sold some handmade trinkets and played Haitian songs while the team laughed and bonded.

Throughout the day, God was reaching out to us through all the Haitians we encountered and each other through music, animal noises, speech, or laughter in grand times and tender moments. The team is learning more Creole and better ways to communicate without speech. We are all forming lasting relationships, loving on people, and glorifying God.

Even as I finish writing this at 10 PM, the Haitians next door are playing music where I recognize “Jezi Kri” (Jesus Christ). Even as it seems annoying at this time of the night, it’s wonderful to hear them worshiping God, as we do, at any time across all nations.