Bright Horizons Team – Where Our Hearts Are

The Bright Horizons education team discovers the joys and challenges of visiting the Haitian market and continue their heartfelt work setting up the new preschool.

Today was an awesome day! Tia and Sarah climbed Mount Pignon! They came back full of smiles and very tired. They climbed the mountain at 5 am with our host Christi and some friends we have made since we arrived here. They told stories about singing and some falling, (no one was hurt).  Sarah and Tia will have to tell the rest.

When the girls got back we had pancakes and eggs made by our fearless leader Craig. That was just the fuel we needed for our next adventure. We made a plan and left for market.

Wow! How do explain market? Sensory overload is the first thing to come to mind. The sight of all the people is more crowded than Wal-Mart on Black Friday. People walk around carrying everything from belts to bananas stacked on their head. You see people sitting on stools with their goods for sale, laid out in front of them, all surrounded by the chaos of what felt like hundreds of people pushing to get what they need and get it home. We too had to find supplies for the house and for the open house.

Produce at the Market

As you’re walking through the market, you can’t help but bump into people, but they were all nice and patient with the goofy American walking around looking at everything like she had never seen it before. It was all the usual things you would think that you would find at a local market. You will see produce like potatoes, carrots, etc. Normal things and then you see things like rock salt or underwear being sold out of a wheelbarrow.

So much to look at!

When you think you have seen it all you go into the meat market. I was not with Tia to see the goat head, intestines, and the chopping of the meat with a machete; however, I did get to see and smell the pots of meat setting out in the Haitian sun for sale. We walked through it very quickly. Sarah and I breathed a sigh of relief when we reached the other side. Our tour guide, Liz turned around and said “Oh, we missed seeing the bakery! Do you want to go back?” Sarah and I looked at each other and agreed we most definitely did not want to go back if it meant going through the meat market. So on we went.

Liz, seeing that I was getting overwhelmed, took us into a shop in a little building. Instantly the environment changed. This small little building was a sweet oasis from the noise and chaos outside. Other than the proprietor sitting in the doorway, we were in there alone. It was cooler, as it was a concrete building with a roof, and it was far enough away from the meat market it didn’t smell bad.

Being somewhat claustrophobic, I can honestly say this was the first time I was thankful for a small secluded space. As I looked around and saw many things that I can only guess what they are, one thing stuck out. Here so far from home and being exposed to so many new things, I see something that makes my heart smile. A can of Pringles! Here in this little shop named after the owner called “Fet” was a touch of home. If I would have had any money on me I would have bought it and probably ate the whole thing because it would have tasted like home.

We had finished our shopping and were headed back to the three wheeler to wait for the rest of our team. The rest of the team arrived with smiles and similar stories.

We left and went to see the people washing their clothes in the river. As we walked up to the river bank, we walked past a building with a powerful smell. It had pigs and garbage outside, but I think the pig and garbage smelled better than the building that was a rum factory.

The path to the river, passing the rum factory The Rum Factory

As we walked to the river we saw children and what I assumed was their parents swimming, bathing, and doing laundry in the river. I heard laughing and talking in Creole. They really looked like they were happy and having a good time. Between the heat and the dust, I was tempted to join them but as we were walking up the hill toward the three wheeler Heidi told me she had heard the run off from the factory goes straight into the river. Not that there was rum in the water but the leftover chemical byproduct.

A family doing laundry and bathing in the river

After coming home I had the fun of doing my own laundry by hand in the shower while singing really loudly. No one could hear me because of the pouring down rain on the tin roof, not even Liz in the stall right beside me, also singing and doing laundry. That was fun, but the best was yet to come!

As I was finishing my laundry, Sarah popped her head in to tell me we were headed over to the school. I finished up my work and headed over to find they had already started the painting and drawing of the decorations on the wall. Tia and Sarah were starting to paint shapes on one wall while Heidi and Bev were drawing the alphabet and numbers to be painted on the other. I could see this was where we all wanted to be. This was where our hearts were. We painted and laughed and told stories of each others’ lives and truly enjoyed just getting to know each other better and being in the classroom getting it ready. 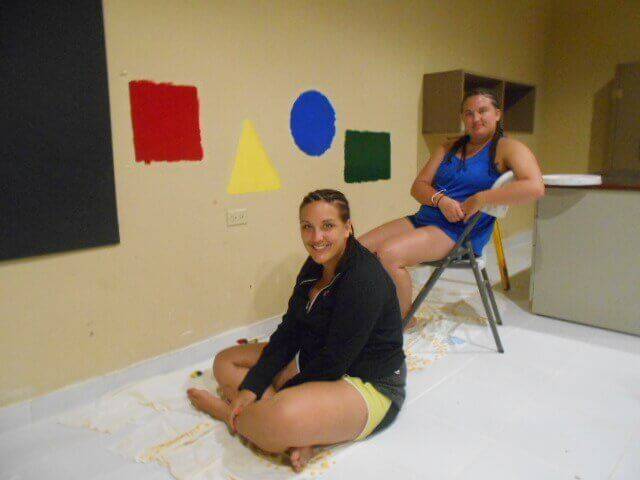 It has been a great day but now I feel a shower and bed calling me. May your dreams be sweet and your heart be blessed. Good night.