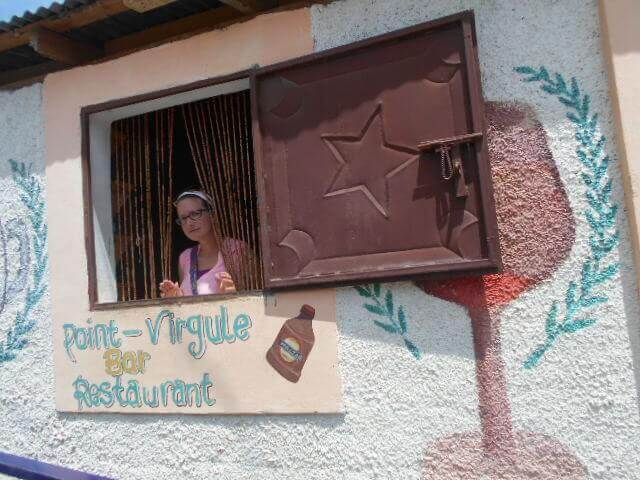 As the Bright Horizons education team continue to experience the people of Haiti, they share the hope they are seeing being sown day by day.

We had another busy day today!

Before we talk about our day, Sarah and I would like to talk about our adventure on Mount Pignon yesterday morning. We were up at 5 am to begin our hike. Woodson, Kenzie (MH4H friends,) John Willio (MH4H staff) and Christie (Director of Operations) helped guide us to the top of the mountain. The climb was very rocky and the trail went all different directions. We stopped for a few breaks to re-hydrate and talk about the view at each stop. Christie described life in Haiti as constant going and sometimes chaotic. She said she would use the climb to think and the top of the mountain was a great place to think. Once we got to the top, there was a brick building that we climbed up to check out the view. It was amazing! We sat and admired the view while talking with all of those who came with. Christie, Kenzie, Woodson and John Willio sang songs and played music with their hands that we thoroughly enjoyed. We took our pictures to document our success and headed back down. The way down was slightly easier than the way up. We are so thankful for Christie wanting to take us up and for everyone who joined us!

We were able to sleep in a little bit today before breakfast made by Craig. After breakfast we rode to church in our three wheeler transportation that we have been using for the week. With all of the rain we got last night, it made for a bumpy ride but our drivers got us there safely! The church we attended today was made out of sticks, palm fronds with a tarp over the top. It was a nice set up! There was about 60 people there and it was full of excitement! The speakers and the singers were full of life and animation! It’s amazing how happy the Haitians we have come in contact with are, even though they have very little.  Heidi (the Education Leader) was a great translator to help us understand what was being said.

After church, we looked at the classrooms that are on the same property. The only thing that was in the 1st grade class room were chairs and a chalkboard sitting on the floor. It was heartbreaking to look at this and to know that this is what the majority of the classrooms look like in Haiti. It made us hopeful for the classroom that Many Hands 4 Haiti started and thankful that we got to be a part of getting this classroom ready for the new students to start.

The classroom that we visited

After church, we went to lunch at a restaurant in Pignon called Point-Virgule Bar Restaurant. We had rice with bean sauce and chicken. We were told our meal cost about two dollars in American money.

Next we got to visit an orphanage in Pignon. We were welcomed with open arms by two pastors who were eager for us to meet the kids. We were surrounded by children as soon as they were able to see us. We brought colors, stickers, paper, pipe cleaners and nail polish along with us to share with the children. All of the nail polish was immediately spoken for by the young girls and the boys were drawn to the colors and the paper. There were some girls who wanted help painting their nails but most of them wanted to do it themselves. Stickers were passed out, pipe cleaner jewelry was made and all of the children were full of smiles and laughter. We taught the children a hand clapping game and they taught us one they were familiar with as well. The children were hooked to our phones and were wanting photos taken of themselves. We showed them different filters on our phones that made them into a dog, a fox, etc. that they laughed at. We took a group photo with all of our team and all of the children before we left.

After the orphanage we ventured on to an elderly ladies home that the Many Hands 4 Haiti staff had come in contact with earlier this year. The lady had been very sick this last month and was not doing well. She stated her last wish was to go to church before she died, but she was too weak to make it to church, so we brought church to her. We brought along a keyboard and sang and prayed with her. She was not responding to the singing but during the prayers she was making noises as if she was agreeing with what was being said. Before we left Liz heard her say “Wow!” It was heartbreaking to see her there helpless, but we are all hopeful that a miracle is on its way to heal her.

We then rode home on the back of the three wheeler in the pouring rain. We all attempted to avoid the rain and hide under ponchos but then decided to embrace the rain and watch the community as we drove through. There were lot of children out in the streets playing soccer while we drove through. Craig informed us that soccer while it rains was a huge culture activity here in Haiti.

Once we got back to the house we were able to dry off and begin making dinner. Liz, Tia and Sarah made a concoction of mac and cheese, potatoes, corn and Velveeta into our “carb overload” dinner while Bev, Mary and John Willo had great conversation about life. During dinner we talked about the day and what we had planned for the rest of our week.

After dinner Liz, Sarah, Tia and John Willio (MH4H staff) played an intense game of Blokus. (Tia won 😉 ) John Willio had to leave but we continued to play with Craig. (Craig won)

To end our night, we finished some last minute classroom touches. It is coming along great and we have our open house tomorrow afternoon! Its crazy to think we only have two more days left of our trip and so much to accomplish in those two days!

We are sad to have the trip coming to an end but anxious to talk to our family and friends!