It doesn’t get better than this

We started this fourth beautiful day in Haiti with some good old farm work. We traveled down to the Many Hands for Haiti farm, which grows mangoes and bananas, to prep the land for tomorrow’s planting of hundreds of banana trees. We separated into three groups, one hoed the earth into easily manageable soil, one dug holes for the upcoming banana trees, and one precisely mapped out the land with string and sticks as place-markers. For obvious reasons, especially when we first started, the Haitians found our work ethics quite humorous! For instance, we (Katie & Lauren) attempted to help our Haitian friends dig holes for the banana trees. Sounds easy right? It was a lot harder than you think! It was amazing to us that these people easily do this kind of backbreaking work day after day, without complaints.

After accomplishing these tiring tasks, we left the farm and headed back to the dorm for lunch. Our next destination was a nearby school to help run a VacationBibleSchool program and interact with the 50 kids that attend it. When we showed up, we helped the kids put a bracelet together with little colorful beads that spelled out their names. After that, we brought out the bubbles, balls, frisbees, and nail polish, which is where the real fun began.  We noticed the pure joy that the kids seem to possess at all times, no matter what they were doing. For example, Vicki (aka the “Bubble Queen”), much to the kids delight, blew bubble after bubble while they chased them, screaming for joy as they raced each other to pop as many bubbles as they could. Also, on the small dirt field located behind the school, we played soccer and catch with the balls and frisbees. It was so awesome to play with the kids, especially turning up the dirt and laughing with them as we tripped over each other in conquest for the ball. While this was going on, many members of our team were painting the nails of all the little girls, and surprisingly some of the boys too! One of the little girl’s names was “Mylove,” and she got particularly attached to David, and vise-versa. David shared with the group his overwhelming feeling of compassion for her and hope for her future in this broken world. I think we all had similar feelings looking at these beautiful children today. 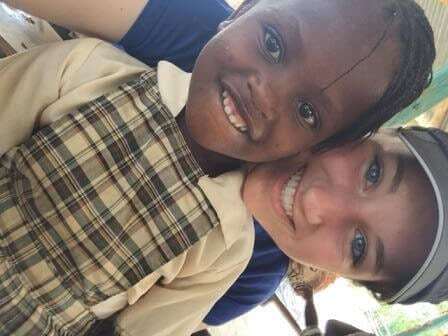 When we got back from being jungle gyms at the school, we rested a bit and were asked if anyone would like to go hand out baby formula to some nearby families in need. Most people were pretty worn out still, but of course, when we (Katie & Lauren) heard the word “baby” we were definitely in! So, Nichole, Woody, and Jean Rene, and the two of us jumped in the truck, baby formula in hand, and hit the bumpy roads to visit the families. For some reason, the families and their beautiful babies seemed to be a little more cautious of our presence and offerings and jaded towards us, than anyone we have seen so far. It was an interesting perspective on the culture that we hadn’t experienced before.

Later, we finished the day with a sunset hike up to the Pignon sign on the mountain. It was quite the adventure, especially with us following the “Hank trail” and Jen getting lost. We picked up some Haitian guides on the way up that fixed our navigation problem and brought us a lot of laughter along the way.

Today, one of the things that God continually showed us over and over again was that even though we cannot speak the same language, we can still find common ground to communicate through. For example, today while hoeing dirt, Vicki found a way to evangelize with the man beside her through the word “Jesus.” We have learned again and again that “Jesus” is the universal language. Another example of this common ground was during VBS. Jessica found a connection with some of the older girls while painting their nails. She noticed that one of the girls had a bracelet with the words “Jesus loves me” on it, to which Jessica said to her: “Jesus loves me too!” and her face lit up. They shared this common connection of the simple fact that Jesus loves everyone, no matter how different they are from each other.

We had a great day full of sweat, heartbreak, love, laughter, joy, (and mangoes), and we are all enjoying this amazing time in Haiti and the blessings it has brought us. Something David said to Vicki while being swarmed with children at VBS today sums up our trip perfectly:

“Mama, it doesn’t get any better than this.”