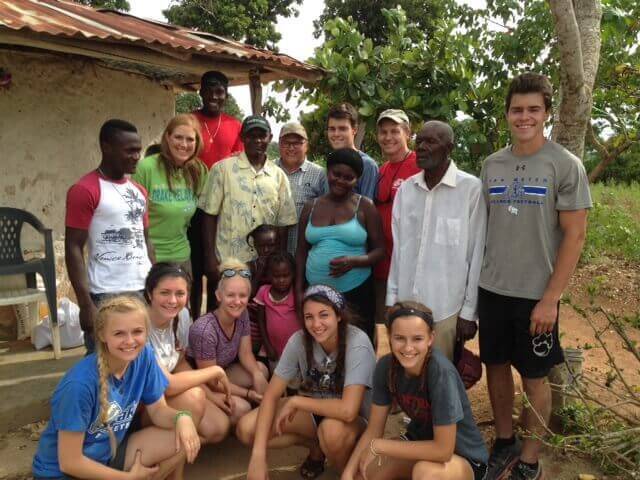 Justin Ashley, from the Lutheran Church of Hope (LCH) team, explains the impact their trip is already having on their perspectives as they see the realities of Haiti firsthand.

Simply put, this first day was a shock. Not that we didn’t know all the stats, all the figures of how severely poor this nation is, but we all discovered today that there is a large difference between statistics and actually being there. To actually be immersed in the moment, and see the conditions that these strong people live in, was different.

We started off the morning bright and early, with a delicious breakfast from the wonderful cooks here. We then loaded up in the back of the pickup and made out way into town. Our group of 10 split into two groups of 5, and each group took on the task of helping pour a concrete floor for a home. When my group and I got to the worksite, we were greeted by a group of about 6 Haitian workers. While several were excited to see us, some of the other workers at first seemed a little indifferent to our presence, probably foreseeing that we would slow them down; and they were right.

Bucket brigade into the house

These men operated like a well oiled machine, from mixing the concrete to smoothing the final edges of the floor. But what our group of concrete-pouring rookies lacked in experience we made up with attentiveness and hard work. We made up the transport line, handing pail after pail from the heap of mixed concrete to the workers inside the house. After some time, we began to connect with all of the workers, through that bond that only hard work and sweat can forge.

During the breaks in the action, we met the family that resided in this house we were working on. They were very humble and gracious, as well as endearing. Seeing their excitement over something as simple as a concrete floor made me realize how insignificant my problems are.

Through my short time here, I’ve observed that many Haitians seem to make find joy in any situation they are in, something that America, a nation of such wealth and affluence, is very lacking in. Inevitably, dozens of Haitian children flooded the area. We played with toy cars and took turns at jump rope, enjoying each other’s company. They were joyful and had seemingly endless amounts of energy. We finished the house and parted ways with the workers we had come to gain some mutual friendship and respect with.

Our group, being the intense workers we are, finished our pouring the floor for our house before the other group, so we made our way over there to check it out. As we were wandering about, we met a local pastor, who brought us to see his home and his church. He spoke pretty decent English, so we were able to converse. He told us his story. He told us of how at a young age, his father tried to kill him, probably so that he didn’t have to take care of him anymore. The encounter left him paralyzed for 7 years, and over time he began to be able to walk again. He then began to study in theology and mathematics, slowly building up a family and church. Today, he preaches at several locations, and also spends time teaching mathematics at local schools. This was one of the most impactful moments of my day. It amazed me at how joyous his heart was. A childhood like his could easily turn a person bitter and away from God. But rather he has dedicated his life to spreading God’s love.

One of the families that received a new cement floor

We then headed back to the complex and enjoyed a delicious lunch. Afterwards, we succumbed to our exhaustion and dozed off for about an hour. After the much needed power nap, we headed into town to hand out the food supplies that we had bought yesterday. We visited several houses, where we handed out supplies, got to know the family, and then prayed over them. Each visit was very emotional. At several of the houses, the parents had just recently accepted Christ, thanks to the tireless efforts of the the pastors here. Two of the houses had father figures who had not yet accepted Christ, so we prayed for them to come to know Jesus. One thing was constant among the houses: they were genuinely friendly, welcoming, and grateful. Everyone we have encountered here so far seems to have solid connections with their community and family, they lean on and trust each other very deeply, and, as I said earlier, seems to find joy in every situation.

We returned to the complex with a changed perspective. Soon, the daily evening festivities began in the courtyard, and everyone was out and about. Nathan (another member of the mission trip) and I foolishly tried to hold our own in a game of soccer against some young Haitian boys, and were easily outmatched. Soon later we enjoyed a delicious dinner, played an intense game of Uno, and had our nightly group recap of the day.

Overall, today was an eye opener. Besides the obvious unpleasant circumstances that many find themselves in here, I also realized the overwhelming feeling of entrapment that many people feel here in Haiti. Especially as I saw people my own age, I felt convicted. At this point of my life, I am being overwhelmed by new experiences and a bright future as college is fast approaching. But children here do not have that sense of a secure future, or a chance to get out of the place they’ve been living their whole life. But I’ve also noticed that while many Haitians lack in financial wealth, they are overflowing with abundance in their relationship with God and those around them; they seem to have their priorities straight, which is something that us in America need to work on.