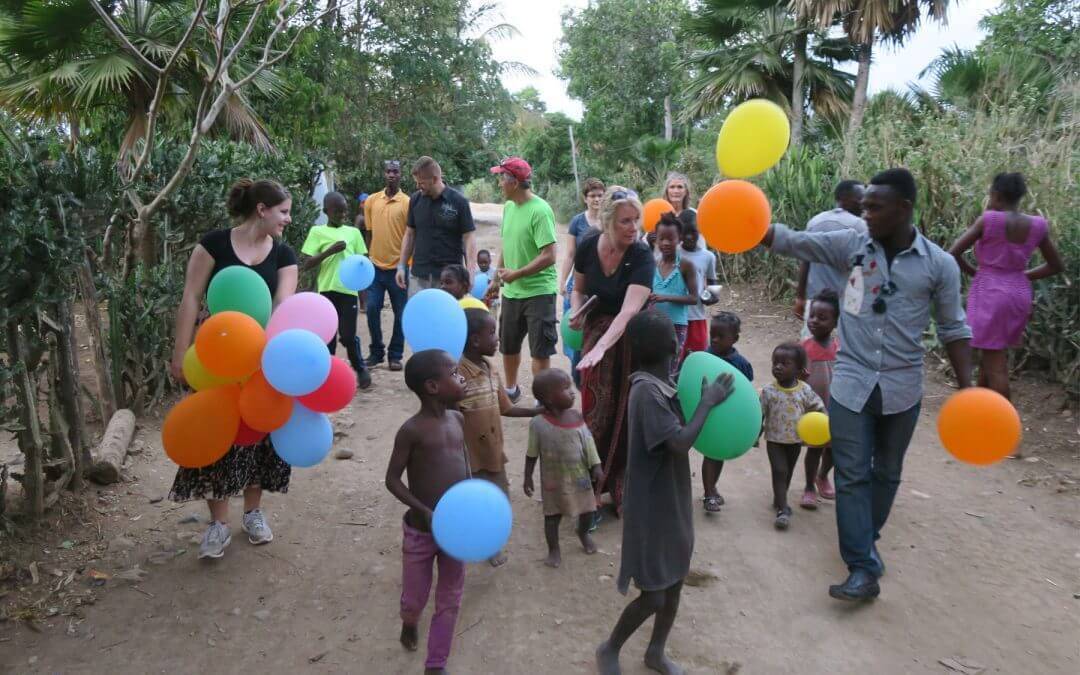 Early in this Advent season in October, six members of the various campuses of a church called Lutheran Church of Hope followed God’s leading to spend a week in Haiti serving Him by loving and learning and leaning on Jesus. Several of the team members that came together have served God in years past, in other places of the world, before coming to the Central Plateau of Haiti.  God was real here just as He was in those places before.

As soon as their feet were on the ground it was evident that the team was dedicated to demonstrating their love for Jesus by sharing warm smiles and waves from the back of our taptap as it left the airport in Cap Haitian, passing people all along the way.  It was the start of a week to remember and a week to rely on the strength only the Lord can give. Before reaching the Many Hands Campus on the three hour journey the team experienced a common occurrence, a road-side truck repair.  In Haiti, if a vehicle breaks down you don’t have AAA to call for a tow. You count on the driver to also be the mechanic to get the vehicle back on the road. Here, two rocks alongside the road were just the thing needed to complete the work.

Saturday morning, first thing, on the road again to do some shopping at the Pignon Market. Many communities have their local market on a specific day each week so sellers may travel on foot to a different place each day of the week. Today there are goats to purchase and deliver to families that have been identified as people in need. Some food items were also purchased to share with the families as well. Oh, and don’t forget to pick up one essential tool for nearly any person living here… a machete. The man selling also crafts sheaths out of leather on location in the Market. In conversation as the team traveled the streets and market square, 3 essentials of Haitian survival were identified…a machete, a five-gallon bucket, and rope.

To market! To market to buy a fat goat! One of the many vendors at the market.

People and goats travel together in the three-wheeler.
The LCH team with one of the families who received a goat.
God’s love and blessing knows no boundaries.

Sunday morning worship revealed the heart of the worshipers through scripture memorization, songs, and teaching. The team willingly served the people a meal that had been prepared for after the service…the food came from Meals from the Heartland which are packaged in Iowa where the group is from. After the team lunch at an open air restaurant in Pignon, the team participated in a celebration that had been planned as the ‘Do Something Concrete’ project comes to a close. 787 concrete floors have been poured in homes across the area as a result of the partnership between Many Hands and Lutheran Church of Hope.

The party invitation list included all the mason bosses who headed up their concrete crews, the local vendors who sold the needed sacks of cement, and the transportation guys who brought sand, gravel, and cement to each site. Following a FUN and successful party full of great food and the opportunity to give praise and honor and glory to God for all he has done through this project, the group set out to share the party decorations with some kids in the neighborhood.

Balloons are the newest fashion statement. 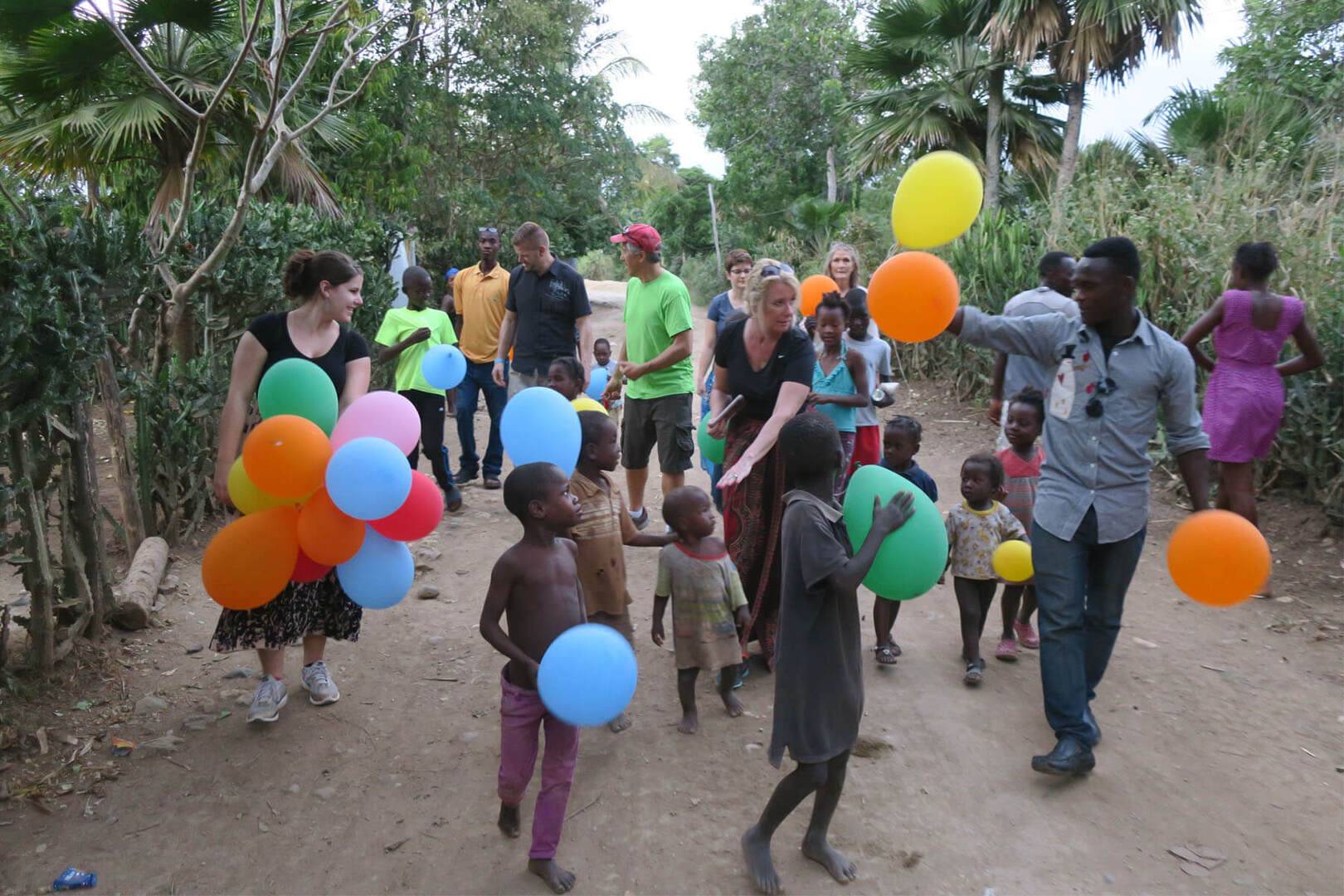 Sharing balloons with the neighborhood kids.

A week in Pignon, Haiti is just not complete without an EARLY morning hike up TO THE TOP of Mt. Pignon.  The whole group reached the top with the help and encouragement of the Haitian guides.  Safely back down the mountain, the group spent time meeting all the Many Hands Haitian staff members to start the work week out on a Monday morning and also visited the kids and teacher, Miss Juna, at the preschool on the MH campus.

NOW…since it was just 9:30 am when all of this was done, the group provided the service of planting 5 plantain trees each to 2 families in the neighborhood.  To continue this day of service, the team supplied a ‘splash of color’ for three families that have received the gift of a new house through the project coordination from MH. Next week a local ‘artist’ will put the final touch on each home by painting the scripture reference of their choice on the house. One house will share “Som 27:1” (Psalm 27:1) to all who pass by.  Another house will display the words “Jezi se Lavi” (Jesus is life) along with ‘Som 23’.  Of course there was time throughout the afternoon to play.

On top of Mt. Pignon. Visiting the preschool.

A family standing in front of their newly painted house.

Tuesday brought the opportunity to share an assortment of food with some families in need.  Rice, Beans, oil, spaghetti, and bouillon will supply a family with encouragement as the food is shared in the name of Jesus Christ.  It is an opportunity to SHOW the love of Jesus through this gift.  Another opportunity to serve Meals from the Heartland came with the MH Thrive for Five program when 60 children and a parent or caregiver come each weekday morning.

A journey to Bassin Zim provided an opportunity for the team to witness more of the striking natural beauty that Haiti is blessed with and to learn a more about the culture as this geographical location touts caves where voodoo ceremonies are held. The trip across the Central Plateau back to MH Campus in Sylvain brought the chance to make this trip hands down complete….Rain while riding in the open back of a Haitian taptap.  The first drops were refreshing then it was plain old COLD.  Please note…all the guys were INSIDE the cab with all the ladies out in the rain.  Turns out there was some bribing going on.

A taptap is called a taptap because the driver heeds the signal from the passengers to stop if he hears ‘tap tap’ on the roof or sides of the truck.  The guys INSIDE bribed the driver through the translator INSIDE that if the ladies OUTSIDE used the ‘tap tap’ signal to stop, they would give the driver a dollar to just keep driving. While the guys were strategizing during the rain, the ladies IN the rain were doing their share of scheming.  Talk of tying the rooster up right outside their window during the night… one that doesn’t know the difference between the black of night and dawn.  Oh! and the idea of cutting the cord on the fan, aka ‘sleep machine’, that the guys had laid claim to for their room the entire week.  All scheming and strategizing aside, the evening was concluded with good discussion from the devotion material that the group utilized to help share together ‘a rose, a thorn, and a bud’ from each day.

Myla and her two guides went to the top of the waterfall.

The last full day of the week in Haiti for the team to serve God with all of their energy started with pouring the last concrete floor of the Do Something Concrete project. For sure this is the BEFORE picture!

The team slipped in another chance to serve the meal to the Thrive for Five moms and kids before ‘pedaling’ off to deliver a PET cart to a man who is battling Tuberculosis. The man is being treated for the disease through the local hospital but life is hard. The team prayed with the family for a complete recovery and for this gift of transportation to bless them. Some playtime at an orphanage in Pignon was a concluding highlight for the group. Jump ropes, a soccer ball, crayons and paper, hula hoops, and LOVE were shared by all. After sharing a cold drink and snack together the kids and team said goodbye.

Since it was still daylight, one last place to experience…the Suspension bridge. It was a busy time at the bridge. The team had to wait while several motorcycles crossed, some at daredevil speed. Once on the other side, one of the members of the group whose name rhymes with a word used in a previous sentence exclaimed, “THAT was the dumbest thing I have ever done!” A great effort was made to seek out a spot to walk THROUGH the river rather than use the bridge to get back to the other side. A compassionate Haitian woman was the guide for the best place to cross with the fairly strong river current.

One last evening to reflect together on how God used the team and showed himself through it all. God was and IS and WILL BE present. Keep close to Him and follow Him as he leads day by day.

Mr. Marcelin poses on his new P.E.T. cart with his son, Kervensky. Sharing love and joy with the kids at the orphanage. The LCH team explores the extension bridge. Saying goodbye to new friends.