The inspiration for this post was a photograph you will see later down the line. It would have made a favorable St. Patty’s Day Facebook post had I not forgotten about its existence. The chance to have used it as a “springy” Easter post has also since passed (unless your Orthodox Christian) but alas, while everything else is expiring, the promises of God are forever.
Here my photo has become the perfect illustration for the first blog I’ve posted in…close to 2 years!
Shame on me.
I don’t believe in coincidence though, so I guess it’s finally just the right time and…The Right Place?
Read on and decide for yourself.
**********************************
When you’re traversing, unsure of your exact destination yet you have the feeling it’s quite possible you missed your turn a ways back and you’re too stubborn to stop and ask directions…

The larger storm clouds roll ahead into the distance and with them the imminent threat of a downpour. You’re thankful but you feel your cheeks moisten nonetheless as the clouds above begin actively misting.
You’re cold. You’re tired. You’ve been on the road for what seems like forever and sleep hasn’t come easy.
You’re hungry, weary, second guessing, starting to lose confidence…

That’s when you see it. Just up ahead!
Without even knowing what it would be, you recognize it in an instant!
Had your flight been delayed even ten minutes or the rain storm ahead lingered just a little while longer, none of what you’re seeing now would even be possible.
This, this is for you. This is your promise reminding you of what’s to come;
Well done good and faithful servant.
While you were unsure, even questioning, you stuck to the path. You clung to hope. You didn’t give up. You stayed the course. Now this, your prize. A magnificent FULL rainbow!!

Christi and I were only miles (less than 20 minutes) from our home in Pignon when we came upon  this fortunate sight! I’ve never seen rainbows in my life like I have in these last two years. Many have been a full arch like the above picture and even one double full arch! I’ve often wondered to myself if God wasn’t trying to get my attention somehow. What are you trying to tell me, Lord? In was in this moment I heard Him loud and clear. It was really very simple:

You are exactly where you are supposed to be.

I didn’t realize how thirsty my soul was for this encouragement.

That day’s path for Christi and I brought us from Michigan well before sunrise, into the noon-day heat of Cap-Haïtien, and then onto motorcycle taxis for the last leg of our journey. We had been in Illinois and Michigan for some work-related meetings and a couple “down days”. I’d be lying if I told you I had wanted to go on this trip. I was being stubborn. The things I had on my calendar during that time had to be rescheduled. It was an inconvenience and I let everyone know about it. (Not claiming to be perfect here…I need Jesus e’ry day friends!) This situation is one in which I literally realized my need to be humbled and submit to God’s greater plan. Without getting into details, I’ve recently had a more personal situation that this story might also represent well in a metaphorical sense; wondering if the choice I was making was right..was I really on the right path? On both matters, I soon realized what God wanted from me so I gave up and gave in to His will. And just like all things done with a clean heart in obedience, it was better than I could have ever imagined!
Even if it may seem like a wrong turn, we can trust that if He is guiding us, His way is always better.

No matter how adaptable a person is, moving to a new country and learning a whole new way of life has mega challenges. Micah (our newest long-term-in-country-co-worker) was recently sharing with me about the difference between culture shock and culture stress. This was news to me! So I read up on it.

Culture shock has to do with the surface challenges one will face during the “crisis stage” of entering a new culture. Language barriers make relationships difficult, diet changes make your body feel different, and in a culture like Haiti, a deeper understanding of the intense poverty in which your friends and neighbors are living can most appropriately be labeled as, shocking.

Culture stress is the next level.
Communication is more than language. Learning non-verbal cues, what’s [not] appropriate, what’s [not] funny, and learning new ways of doing things does not happen overnight. A different value system challenges new ways of thought on things you wouldn’t think about such as cleanliness, responsibility, and use of your time just to name a few. You don’t forget who you are in this process but you are stretched and you will change. This is natural but difficult and of course every person will respond differently.

Ironically, a response I have had to the “the culture stress” is to question. Question people, motives and intentions, and even truth. It seems what is true for some cultures and people groups is not true for others? As a Christian though when you start questioning truth, you soon come to a place where you recognize what you’re actually questioning is God. Some might mistake this as doubt. It’s not. As a “missionary” it’s also easy to get caught up in thinking is what I’m doing actually making a difference? I’m sure many Christians in ministry feel this at one time or another. Let’s not forget it is God who will determine our success. We just need to be obedient. Then with the faith God has gifted you, you are reminded that there is only one Truth. And one Way for this one Life. Even if we might feel a little lost sometimes.

Aside from my attitude, there are many other things that could have kept us from arriving to that specific juncture in time and space. This world is imperfect. Thankfully nothing did. I couldn’t help but feel incredibly special bearing witness to this fleeting picture of His majesty. Our taxi chofèrs who are also our neighbors and friends had no problem stopping with us for a quick stretch and a couple photos. 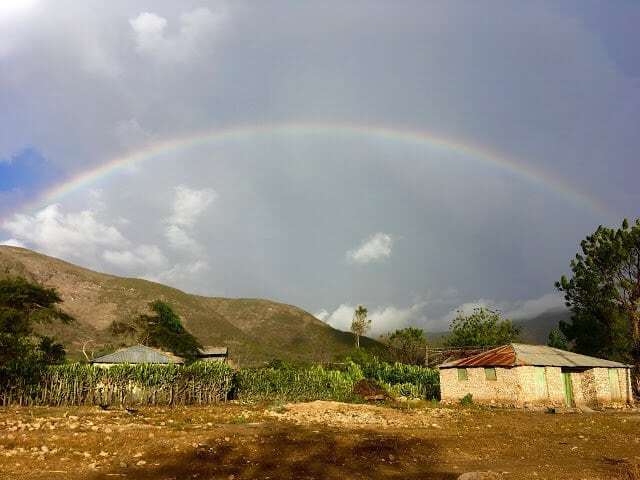 This picture doesn’t do justice as we could literally see where the arch touched the earth!! 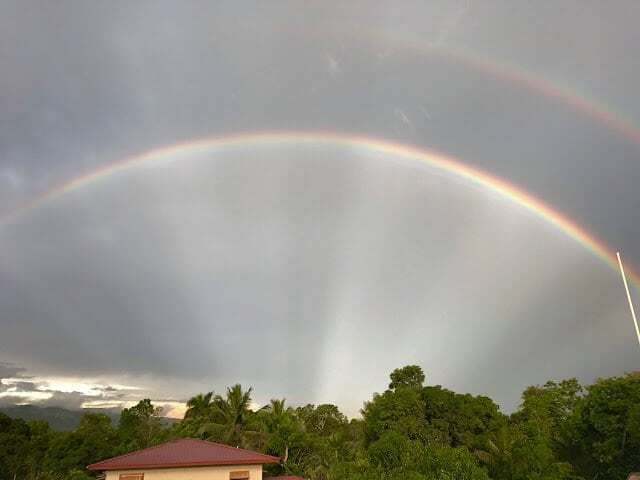 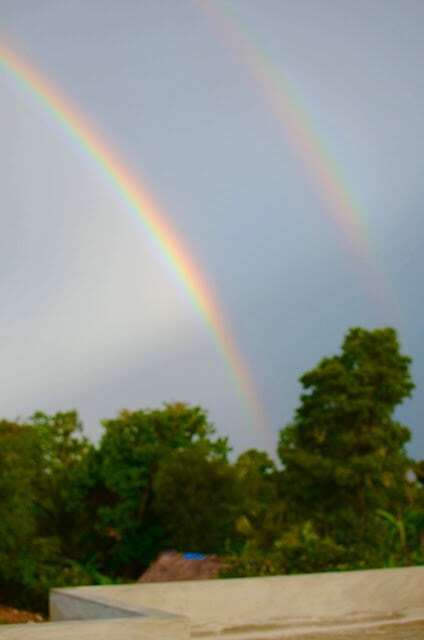 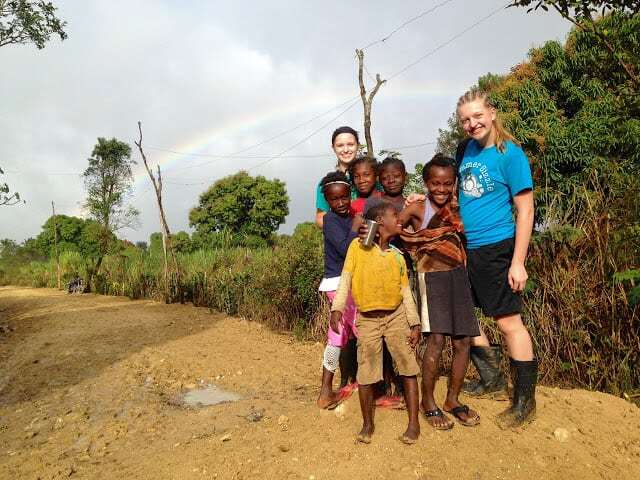 Just another one of last years rainbows with this colorful crew!

Getting back on our bikes, I shared with my Haitian friend/driver the old Irish tradition of the leprechaun. A little man who guards a pot of treasure “where the rainbow meets the earth”. If you are quick enough to catch him and answer his riddles, he’s obligated to share his riches with you. My friend was more than bemused! I continued to explain how every culture/people group has one kind of legend or another, using the Haitian example of the lougarou (pronounced lou-ga-woo), a person who is said to turn into the form of an animal at night. These human-animals (think of a werewolf) are said to be ravenous, blood-thirsty creatures. It could be a dog, cat, goat, horse, or even a bird.
All of the friends and people I have spoken with on the subject have never actually seen a lougarou with their own eyes yet they still believe them to be very real because “others have seen them”. While I personally cannot validate any of the legendary claims, I do know one thing for sure, the lougarou is very real at keeping Haitians off the streets at night!
I went on to share with my friend how I definitively believe Satan and his minions have power on this earth which manifests itself in many forms. Despite that I also believe in the power that rose Jesus Christ from the grave. And that power, my friend, is far superior to any spirit, in any form, anytime, anywhere!
He agreed wholeheartedly and the moment we shared became sacred as I watched the majestic, once vibrantly colored arch, dissapear into the dismal grey….
In minutes it was merely a figment of my fading memory.

Things don’t last forever. Nothing does. Except one.
The promise of the Most High God. A Rainbow is the embodiment of that promise.
A visual representation of His Mercy. His Love. His Truth. Eternally. Sure there have been many “stressful” cultural situations over these last two years and LOTS of questions that don’t have clear answers but without it all I wouldn’t be able to have conversations about leprechauns and lougarous’s on the back of motorcycles in the rain! Neato!
Here are lyrics to a song I like. While it isn’t particularly theological in nature, its sentiment is one I’ve continued to appreciate.
“Do you like where you’re living? Do you like what you do?
Do you like what you’re seeing when you’re looking at you?
Do you like what you’re saying, when you open your face?
Do you got the right feeling? Are you in the right place?”

With Jesus I can confidently answer, YES!

Life will undoubtedly take you many places, literally and figuratively. When His Way becomes your way, you can rest assured that no matter where you go, you will arrive in The Right Place, every time, on time.

Happy Trails, Friends 🙂
I will set my rainbow in the clouds and it will be the sign of the covenant between me and the earth.
~Genesis 9:13~
The heart of a man plans his way, but the Lord establishes his steps.
~Proverbs 16:9~

Let the same mind be in you that was in Christ Jesus..[him] being found in human form, humbled himself and became obedient to the point of death – even death on a cross.
~Philippians 2:5-11~