Beth Dillon, of the Central College Team, describes their first day in Haiti with both obstacles and joy.

Day two of the trip started at 4:30am as our shuttle left at 5. We crammed 16 into an 11 passenger van and began our journey to our final flight to Haiti. After checking our bags and waiting for Kate to get through security,(she was pulled over for having too many books), we reached our gate. The flight was on time and we piled into the plane. A short two hours later we arrived in Haiti. Woody, a MH4H leader and Haitian native, met us outside.

Our final leg of the trip was a bit more chaotic than the previous. As we walked out of the airport, Haitians greeted us with an eager helping hand. They threw our bags on the top of the van and tied them down and we were on our way. Port-au-Prince was different than expected to say the least: cars going everywhere, drivers laying on their horns, and makeshift shops lining the streets.

Once out of the city we had a great view of the mountains on both sides. Shortly after the city, though, the driver was on the phone speaking creole. We only understood 2 phrases “aye aye aye” and “ehhh?” Neither phrase sounded promising, as the van started slowing down and we pulled over. In the mean time we had an extra 45 minutes of bonding time with our new friend, Woody, while we waited for a mechanic to bring a filter and fix it. The drive felt like an eternity driving through rivers, avoiding rain filled potholes the size of ponds, and dodging speeding scooters. But the important thing is…WE MADE IT!!!!

Once on campus we met the staff who were overflowing with joy and Gods love. Instantly the skipped hours of sleep and the hours spent in the car didn’t matter. We did a quick introduction and jumped right into the community. We started out just looking around the community. Before long our group multiplied with young kids holding our hands and stealing our hearts. 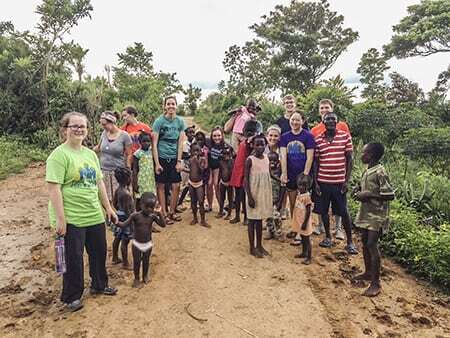 It was time for us to try out our creole. “Bonswa” (hello) “koman ou rele?” (What is your name?) “kilaj ou genien?” (How old are you?) The kids kept popping out of the homes and joining our little parade.

As we reached the compound we didn’t want to leave the kids so we grabbed a ball and went to an open field to play soccer. When we went to split up the teams the kids had their own idea of what they wanted to do. They decided they wanted to play Haitians vs. “Blancs” (whites). From the start we were slacking. They had mad foot skills and scored twice, back to back. There was no stopping them and they knew it. I’ve never had so much fun losing before.

In addition to soccer, some kids were starting a hair salon. They would take out tight French braids and replace them with loose ponytails and feel our hair. These kids’ energy and instant love made my day.

And with that, day 2 is coming to a close. God is good all the time.