Our next trek started very early in the morning before the sun came out. We departed a little after 5:00AM for our climb up MountPignon. Ascending up in the dark was difficult with only a few of us remembering flashlights but as the sun continued to rise the trail became easier to follow. The terrain was rocky and steep, and the vegetation was thick. As we climbed, we became increasingly more tired; however, we encouraged one another and pushed each other on to make it to the top.  Soon, our encouragement paid off as we reached the summit. We all climbed on the top of a small hut and the view was gorgeous. Mountains, the town of Pignon, and the surrounding villages were all part of the incredible sight.  Experiencing God’s glory and handiwork with our small group made the work all worth it. We continued exploring the other side of the summit and taking countless photos and selfies in the process.  Afterwards, Andrea, our guide Kenzie, and Jack all decided to complete the hike by climbing the 80 foot high cell phone tower. The tower was composed of small metal rungs that we climbed like a ladder. Our partners looked like ants on the ground when we were only halfway up. At the height of the tower, the view was breathtaking. It is hard to describe in words the ability to be trembling but also getting the chance to witness mountain ranges amidst the rising sun. We started our journey at 850 feet and ended at the top of the cell tower at 2181 feet. While Greg was anxious at the sight of his daughter 80 feet in the air, Andrea and Jack could not pass up this once-in-a-lifetime experience. At last, we took a group picture and descended down the mountain. Kenzie challenged us in a game based on who would fall the least.  But thankfully there were few falls; mostly just slipping and very careful steps.    –  Jack and Andrea 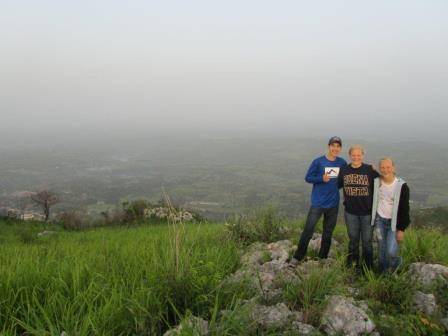 It was hard work to get to the top, but so worth it!

Andrea decided to scale 81 feet higher on top of the mountain. As did Jack, but he said he wanted to go even higher.

They got home from the hike and were welcomed back with pancakes! (I put butter and sugar cane on mine J) Then later we headed to the market! We spent a long time browsing through the many stands of stuff! They were selling everything from fancy Sunday dresses to livestock. Cadena bought some baskets and Ryan bought a knife with a sheath that was made right there! At the market we also saw some super cute kids with some really cool handmade toy trucks that they formed out of tin cans! They were only five or six, but they were expert craftsmen! Some people are talking about how they are having culture shock or they are struggling to adjust to the food, but my only struggle has been not being able to pet the dogs! They are all so cute, but I know I can’t pet them because of flees or other bugs L One walked up to me in the market and just sat down with its tongue stuck out and its tail a waggin’ and I wanted to pet its furry little head, but alas I could not. Aside from that dog dilemma, everything has been super great!!! After the market, we came back to the dorm for a lunch of sandwiches and really yummy cheese! Post-lunch we went to a VBS sort of thing that happens every Saturday. We performed a skit about the good Samaritan, sung songs with the kids (more like mumbled, clapped, and danced because our Creole is sketch), and also handed out cookies and bracelets! The kids were ecstatic. Then we played bubbles, jump rope, and soccer with the kids! This adorable little boy (probably about two or three years old) and I bonded by making silly faces at each other! He then led me in dance during some of the songs! It was probably the cutest thing in the world!  -Abigail

The little hand made tin trucks that many of the kids play with on the street. The afternoon was spend with many of the neighborhood kids. Afternoon kids club treats for everyone! This was part of the skit at the kids club, which was some being carried by a donkey.

We wanted to share a specific need we have come across. For anyone that has been an avid reader of the blog and the many groups’ experiences, here, you will have read about Chaleissa Jacques’ eye cancer and subsequent surgery. Well, the good news is we were able to visit with her and her father, today, at the children’s program! The sad news is that her cancer has returned and she needs follow-up treatments and chemo. This can only happen out of town, in Port Au Prince. The distance and medical costs are beyond their resources. We are asking you all to join us in prayer of comfort, as her pain is excessive and keeps her from sleeping and eating. She is visibly suffering. You might consider joining Chaleissa’s family and Many Hands for Haiti, financially, in her care and treatment.

Chaleissa and her father. MH4H helped the family be able to have a surgery to removed her eye, but we believe the cancer has come back. She is in a lot of pain and we are praying and seeking how best to take care of this precious little one. The situation is not good.