The realization that there were two essential parts left out of the overview of the construction zone in Sylvain has prompted this update.   SO…given we are working on new development in the countryside in a third world country one must realize there are no restaurants to get a quick lunch in the middle of a workday and get right back to work.  Food preparation here takes a long time. There are no packages of pre-made food to open and heat.

Food is prepared for the construction crew each workday by a hard working woman from the neighborhood in this ‘kitchen’.  The woman is Rosita who was mentioned previously that asked Jesus to be Lord of her life.  Some family members have been helping Rosita with the cooking. Today we were captivated by the sight of Rosita’s granddaughter, probably 7 years old…carrying a large wash tub on her head as well as a big shovel with two empty 5 gallon buckets latched on by the wire  handles!

Also…think about a construction site in the undeveloped countryside…what else would be an essential part of the daily routine with a construction crew of around 20 men?

The Haitian port-au-potty. Not quite like Big John’s, we are #1 in the #2 business.

Yep!  A Haitian Port-a-potty. Another side note…It is interesting to observe nearly all of the workers…wearing flipflops on the job.

School starts here in the Central Plateau of Haiti on Monday, September 7th. We hosted a back-to-school party for some of our friends who have helped Many Hands for Haiti throughout the summer.

What’s a party without some snacks and drinks?  We had bread with Haitian Mamba (peanut butter), Cheecos (like Cheetos), Craig’s famous popcorn, and ice cold ‘Koka’ in glass bottles.  As we began to enjoy the food, Woodson said. “oh no, we forgot to pray before we ate.”  So we gave thanks for the food and the KOKA!  We finished the evening with a few hands of ‘En’

(pronounced eh) which is ‘one’ in Creole… which is ‘Uno” in Spanish.  In other words we played the Creole version of Uno.

Back to school also means a distribution of ‘Meals from the Heartland’ which are pouches of rice and beans along with a flavor and vitamin enrichment packet all packed in boxes.  MH4H distributes boxes to 10 schools and a handful of other designated recipients.  One school, located in La Belle Mar, sent representatives, all women, with a total of six donkeys and horses to transport their 28 boxes back to the school.

Women walked 4-5 miles to come and get this food for school opening up next week, They carried it back home via donkey. Loaded up and ready to go!

The 28 boxes weighing an estimated 850 pounds are quite a load for these ‘beasts of burden’.

It was an amazing sight… these women working together as a team, skillfully tying the heavy load securely, and guiding their caravan, maybe while singing, “Through the river and over the mountain to La Belle Mar we go.”  Oh wait..that is “Over the river and through the woods to grandmother’s house we go.”

Away we go. Pretty amazing site, seeing 850 pounds of food being moved by donkey.

Even as much of a privilege as it is to be able to attend school, Back-to-School tme brings economic hardships as families are trying to pay school tuition fees and pay for school shoes and school uniforms to be sewn and buy the needed books and school supplies.  We can sense a heightened desperation all around.  We have been fielding an increased number of pleas for help in a wide range of situations. One way MH4H has been able to ease the burden just a bit is by sharing back packs that have been brought by Mission teams over that past several months.  We had intentionally held on to them to be shared at this optimal time.

One morning this past week the staff devotion time was focused on the Word of God from 1 Peter 1:3-9:  A Living Hope:  Blessed be the God and Father of our Lord Jesus Christ! By his great mercy he has given us a new birth into a living hope through the resurrection of Jesus Christ from the dead, and into an inheritance that is imperishable, undefiled, and unfading, kept in heaven for you, who are being protected by the power of God through faith for a salvation ready to be revealed in the last time.  In this you rejoice, even if now for a little while you have had to suffer various trials, so that the genuineness of your faith–being more precious than gold that, though perishable, is tested by fire–may be found to result in praise and glory and honor when Jesus Christ is revealed.  Although you have not seen him, you love him; and even though you do not see him now, you believe in him and rejoice with an indescribable and glorious joy, for you are receiving the outcome of your faith, the salvation of your souls.  We also turned to Hebrews 13:5b  Because Jesus said: I will never leave you, I will never forsake you.”   As a group we repeated the verse out loud numerous times… “Paske Bondye te di: Mwen p’ap janm vire do ba ou, mwen p’ap janm lage ou.”

In times of hardship, God’s word brings HOPE to a potentially hopeless setting.

Another little special needs boy was brought to us, named Wikenson. Continue to pray for us as we evaluate how to handle these cases presented to us.

Recently we met Wikenson, a 4 year old with similar problems seen in Elinise, the 3 year old that MH has been providing the means for physical therapy and doctor appointments. Such situations just shout “The Least of These”.  We are constantly trying to discern the right situations for MH to get involved. Wikenson is actually the third such child in need that we have met.

Little John Kerry, another special needs boy we are currently working with by providing physical therapy.

The following picture shows John Kerry Cadet, 20 months, who came to us a few weeks ago.  His father walked from Bohoc which is a good 4-5 miles from the dorm.  He has been bringing John Kerry by foot into Pignon multiple times a week for physical therapy sessions hoping to see improvement in his son’s condition. We are praying for God to show a way to ease the burden for the families of children with these special needs. 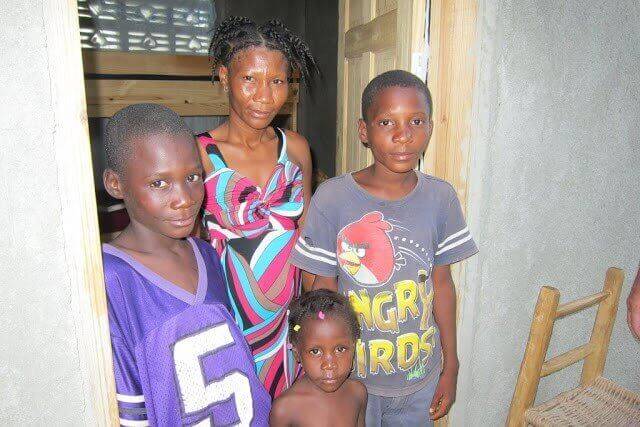 We recently rebuilt this home for this family!

This thankful family has been blessed to have a one room concrete block house provided by MH along with partnership from Christ Covenant Church in Knoxville, TN.  Veronique George lives in Sylvain with her 3 children.  Her husband passed away and she has been doing her best to be the head of the household.  Hebrews 13:5b  Because Jesus said: I will never leave you, I will never forsake you.” “Paske Bondye te di: Mwen p’ap janm vire do ba ou, mwen p’ap janm lage ou.”

We pray this home will be done soon. Providing safe-homes is one of the building blocks to changing a community.

Another house build project by MH is down the road from the dorm.  This house is being built in the same ‘lakou’, yard, as another existing house where 16 family members are residing together. The man standing in the doorway had put up the stick walls and had started gathering wood to be used for the roof.  MH is supplying the materials and labor for the roof and doors.  The materials to ‘Krepi’ the walls and pour a concrete floor will also be provided by MH.  The labor will be done by this man and his brother who have concrete pouring skills.

Christi and her flock of goats.

Saturday is Market day in Pignon.  MH purchased some goats to begin a breeding program.  A young man seemed to be observing as we were adding to the number one by one.  He came close saying he was ‘grangou’, hungry, and needed money for food.  It is such a hard thing to handle as it is not the best thing to just stand and hand out money.  We were looking ahead to the task of getting the goats from Pignon out to their new home in Sylvain.  Rather than giving a handout, we asked if the young man would help walk the goats in exchange for 20 Haitian dollars (about $2.00 US).  He agreed.  He used part of the money on the spot to get some food to eat before the 1 1/2 mile walk to Sylvain.  He got a meal, we benefitted from his help, and we became friends.

You can’t have a goat breeding program without the other half of the mating process.