Words from a Father: My Starfish

As we are two days away from the Freezin’ for a  Reason fun run/walk, we wanted to share this story written by Tommy Henderson, Silentor Esthil-Henderson’s adoptive father. Tommy found Silentor at the age of 9 in Haiti, weighing 39 pounds, unable to walk, and about 6-months from dying. Silentor had osteomyelitis, which is the infection of the bone, and it had ravaged Silentor’s leg. Tommy made it his responsibility to see to it that Silentor would not only survive, but thrive. Please enjoy the story as told by Tommy to his son, Silentor. 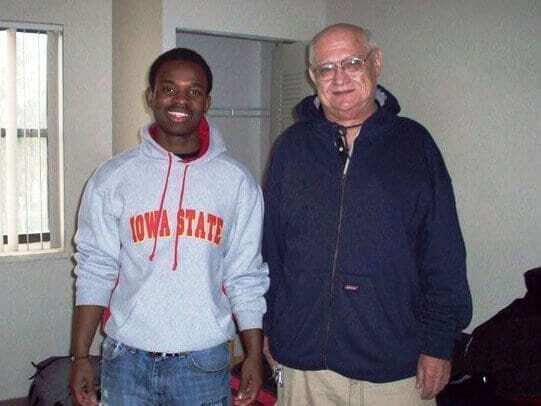 “”I would like to share an experience with you as I have tried to share my son with you. At home in Iowa, I have on my desk a picture. It is of my adopted son, Silentor, as he completed a 3 and ½ mile run in 19 minutes and 21 second. This was a totally awesome event. It came after bringing a scared and slightly bewildered, badly crippled child from rural Haiti to the US, living with him several months at Shriner’s Hospital of Chicago where he bravely underwent 9 surgeries (following one in Iowa City), many hours of dance lessons instead of physical therapy, and a seemingly endless legal battle with what was Immigration and then became Homeland Security necessitating a start over. As he crossed the finish line, he fell to the ground quite exhausted, but had the energy to give me a thumbs up. I began to weep. His God given Godmother, Jennifer Reynolds, whipped my check and threw her arm around my shoulder. A little boy standing alongside of me asked his mother “what is that old man crying about” ? A dear friend of ours, Bill Warren, had served Silentor as a mentor and a coach snapped a picture of Silentor crossing the finish line. On the back of it Bill printed 3 words before he giving it to me; “YOU WIN TOMMY”. What an understatement! I sometimes wonder if Bill realizes just how much I value that picture and his words as I continue to win & win & win…..Thank you God, thank you Jennifer, Thank you Bill and thank you StarFish.”

Sign up today to help add classrooms for the school in Haiti, as Silentor returned home to help create more Starfish. Register now by clicking here.