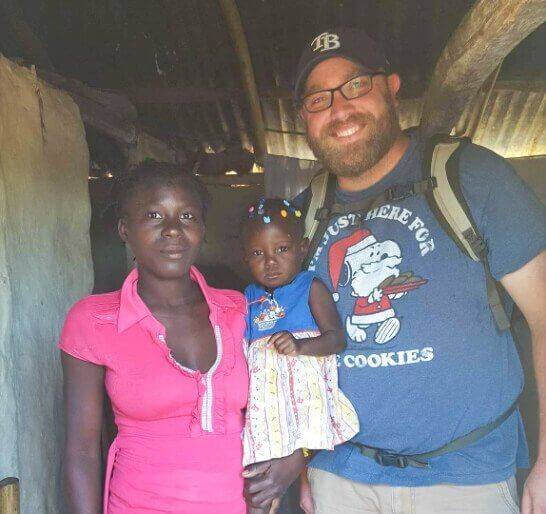 Today could have been a case study of my American modesty and squeamishness. It started by me handing 5 days of dirty laundry to the Haitian ladies hired to do mid-week laundry. No one other than me or my wife have handled my skivvies in many years. As I was leaving the campus with the mixed gender group I was a part of I noticed a couple pairs of my boxer-briefs were already hanging on the drying line for everyone to see. I looked around sheepishly and found myself tempted to mock them as if they weren’t mine just to throw people off. In better judgement I just pretended not to see them and kept walking with my head down.

Later in the day, I got the pleasure of going with Heidi to visit with the child I sponsor through Thrive for 5. This was the thing of my trip here I was most looking forward to. I use a picture of my sponsor child, her mom, grandma, and grandpa as the desktop picture on my work laptop giving me the opportunity to pray for that entire family every time I begin work in the morning.

When we arrived, the mom was undressed and showering in the front yard. I did what I was trained to do which was to make sure I was always looking the other direction, but in the other direction was a breast feeding mother… so I inspected my boots… I really like these boots! They’re military spec and I’ve put a beating to them over the last 2 years… You should see them. Ok – back to my story – I sensed I was the only one of the group that was at all uncomfortable with any of these events. Then add to my embarrassment the motorcycle was out of gas. So while Heidi left to get gas for 20 minutes all of the ladies sat with me and watched me as if I was a lost child waiting for his mother to come back. I don’t know creole so I have no idea what they were saying to each other… I presume they were talking about my boots.

Joel with his sponsor child Baby-Love

Later, after dinner, Heidi and Liz brought the dried laundry back in. I was sitting by the pile folding my underwear with everyone still in the room – bright blue underwear, bright orange underwear, some of them were even holy. I considered finding something to hide under but then began to assess my embarrassment and compare my standards to the other standards I had witnessed today. In my experience of working with the homeless in Southern California and now experiencing Haitian life there is a commonality I have seen. The best way I have to describe it is that there are fewer boundaries among the poor. There are fewer walls and more people living in a given space so people see more of another person’s personal life and in return people are less hesitant for their personal information to be known. This goes far beyond underwear, nudity, and breast feeding. It goes as far as mistakes I make and regrets. It could go as far as the amount of money I spend on pleasantries. There’s more I could list but I think you get the idea.