Who needs sleep when there is so much to do?

Written by Ian Hamilton, a student with Cumberland University

What is sleep? Sleep sounds so nice, yet so foreign to us students. Many of us (especially from a student perspective!) detest 4am for one reason… ROOSTERS… Have YOU tried to sleep when sounds of cockle-doodle-doo are so blatantly loud that you wake up posing the question, “why are the Haitians partying at 4 in the morning!?” Needless to say, we lost much valuable sleep during the first night in Pignon.

Yesterday was a day I particularly enjoyed. It was a Sunday, and who doesn’t love the beautiful day where people join in fellowship and praise God!? Even more special was the fact that it was National Women’s Day. A special “parade” was set up, and we walked the 2.5 mile walk to the main road singing worship songs and dancing to music. A small ensemble of instruments included these instruments: an alto and tenor saxophone, 3 trumpets, a snare drum, a trombone, and a splash symbol. On top of that, there may have been 25 or more women (as seen on the last blogs photos) lined up on both sides singing in Creole.

Later on, we played soccer in dirt with wooden goal posts, and this experience was particularly special to me because of my past soccer career. The part that was so meaningful was…even though I am in a world so different from my own, something so small as a common interest in soccer created a bond that changed the way we viewed each other. We focused less on the differences and more on the similarities and likenesses as human beings. The downside was I got hip-checked into a cactus fence and received many lacerations on both my legs… Nothing Karli (an athletic training student) and I (a nursing student) couldn’t handle. A little hydrogen peroxide and Neosporin did the trick. Even though we were all anxious to use a machete, NO AMPUTATIONS WERE NEEDED!

But really….. What IS sleep?! It’s 4:30am and it’s time to climb a mountain… Yes a MOUNTAIN!!! Why? Because we’re unstoppable creations of God who wanted to see the world in a different point of view that shows God as incomparably glorious. How does one do that?? Wake up incredibly early and climb a mountain to watch the sunrise. I promise you, you see the world in a different perspective. You bypass the monotonous routine of your daily life, and see a massive, aw inspiring moment that not even 2 high power cameras and a Go-Pro can recreate. The Hike took an hour and 5 minutes and several crash-and-burn type moments took place before we reached the top. Did I mention several times we took the wrong path? Regardless, the trials we pushed through and the lack of sleep was nothing in comparison to the determination and power we received from God.

When we got back to the “Dorm” we had a 30 minute breakfast break before we were sent off to be servant leaders to the people of Pignon. A small group of us went to lay concrete for a house with dirt floors, others went to garden and till the soil while yet another group went to support the Thrive for 5 Program (Orphan prevention program). Let’s just say, while yes we did help out, in our male members many of our pride and ego’s were hurt and were incredibly humbled when we were far inferior to concrete laying in comparison to fewer Haitians…

By noon, we had already climbed a mountain (figuratively and literally) and completed incredibly hard labor.

A light lunch and a 10 minute cat-nap later, we were back on the road. This time we were heading to the market, a scene bustling with people and miscellaneous trade goods. The first thing I was warned was that some people can unzip your backpack and steal your wallet without you knowing… Scary… All of the goods were incredibly inexpensive in comparison to even Wal-Mart pricing. Without any loss, at least we think, we left (forgive me mothers) with roughly 7 machetes from various members of the group… Women included! We then headed to a local University in Pignon.

In this University, we met many students, toured their campus, and talked about their experiences and schooling. My “tour guide” was a freshman medical student whom I related to very easily for this reason. He spoke about the healthcare in Haiti and his future ambitions. In all honesty, I was very impressed. We headed back to the dorm and had dinner.

We finished off the day with a post conference about our experiences. OH! Did I mention Lamar and Bildad were reunited with us today!? PRAISE GOD!!! As I finish, the thoughts of a cold shower and getting roughly 8 hours of sleep has me near tears…

Tomorrow we begin a feet washing event and our Leadership Conference. #Excited

Mom: Yes… I’ve put on my sunscreen and no… I am only slightly burned… But the score still remains Cactus 1, Ian 0.

Nothing beats a morning sunrise. Esther, Thrive for 5 health agent, is doing house to house health checks. Some of the students helped Esther perform health checks in homes. A scene at the Bohoc market. Beautiful people. Strong beauty, as this women stands in the remains of a broken home. Kristie Mompremier talking to the students at UCI college. 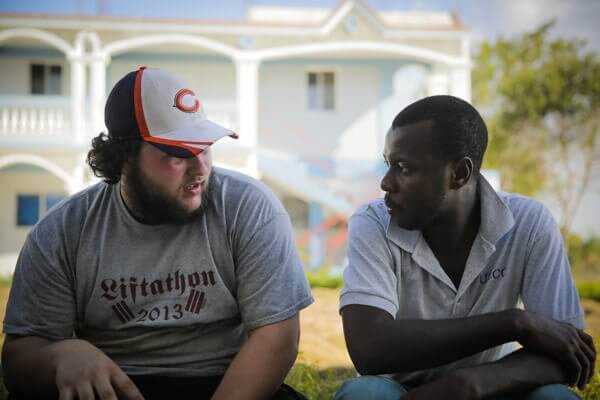 US and Haitian college students talking.

More student to student interaction. Student to student interaction is invaluable, as we learn from each other. More student to student talking at the UCI college. The students transplanted plants from nurseries to gardens in 4 homes. Claudin, MH4H agronomist, giving tools to 4 families to maintain their newly planted gardens. Claudin, the MH4H agronomist, in charge of the Harvesting Hope program. Burns, MH4H construction coordinator, in charge of the cement floor projects. Jean Jean Mompremier, a Haitian national pastor, who is one of the founders at UCI. A student at UCI