Our Family In Haiti 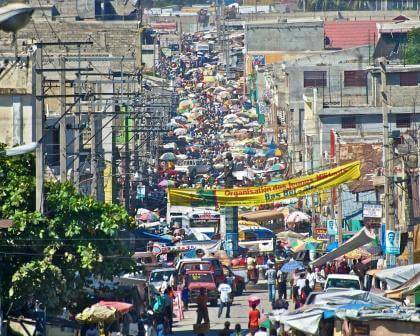 This is written by Kaleb Brand, 11 years old and currently in Pignon, Haiti with family. (Steve & Robin, Summer (11), Nolan (11) and Kameron (8). This is Kaleb’s first time traveling outside of the USA.

Our family is in Haiti. We got dropped of at the airport in Port-a-Prince. We walked over to our truck. I got to ride in the back; it was awesome. When we walked there everybody was just staring at us. Grandpa said the traffic wasn’t that bad, but I thought it was terrible. There were trucks, cars, motorcycles, semis, and tap-taps going everywhere. Our truck was on the left side of the lane just as much as it was on the right side. Sometimes we were going slow and other times we were going 50mph. When we were driving I saw a bunch of people walking on the street trying to sell stuff when people stopped. But most either had something on there head or were just walking. Finally we got to our house. There were peacocks, goats, dogs chickens, and cows walking every where. But most of them had an owner.

Our house is really nice compared to the ones in Haiti. There are typically four different types of houses in Haiti. Starting from the worst; made out of sticks and tarps; then sticks and mud; then block with a tin roof; and the best is cement and sometimes with floors. On Sunday we went to church at 9:00am. It was two hours long. Each song they sang lasted at least five minutes. Church seemed like it lasted three hours. But part of that was that they didn’t sing or talk in American, so we couldn’t under stand a word they said. Afterwards, we went home, got changed, and drove to the orphanage. When we got there, there were kids (from ages 1-20) running every where. I made lots of friends! We played games of dodgeball, basketball, tetherball, and pushed the kids on the swings/tire swing. At the end, people (called the Christian Brothers) came in and sang us like five songs. Some girls and boys from the orphanage also did too. I had a blast!