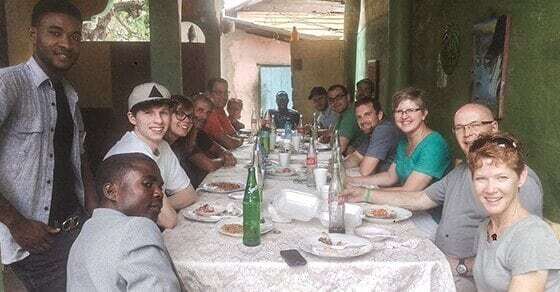 Written by Caleb and Hannah Wipf – The Painting Team has arrived safe in Haiti, after a long day of travel!  Their first full day was filled with worship and service, facing hard questions and answers.

Unimaginable; the very definition of Haiti. No amount of talk from previous trip goers, online guides, or travel prep will fully prepare you for the stimuli that bombards the second you step off the plane. The airport experience in Cap Haitian is far from standard; exit the plane, watch for your bag, have someone without a barcode scanner check the barcode, continue on.

Entering Haiti on the plane

Upon leaving the airport, culture shock sets in. Goats roam the roads, the inviting scent of fresh baked bread in one block is quickly overwhelmed by the noxious fumes of burning garbage. All this was experienced from the bed of a pickup, leaving no noise, scent, or sight hidden. Our 3 hour drive left us feeling battered and exhausted.

Leaving Cap Haitian Driving through mountains The journey to Pigon

After we had all rested for the night, it was time to get ready for church. Church, in many ways, is exactly what you would expect. In every other of the many remaining ways it is completely opposite. Children sit segregated in the front, and behave very well throughout the lengthy service (over 2 hours in length). Music is dominated by voices, aided by the background noise of salvaged and home made instruments. The worship experience is unlike any other I’ve experienced. The disregard of other people’s opinion and the one on one connection they had with God during worship made for a worship so sincere. The lack of instruments, lyrics, indoor worship centers, etc. did not hinder, but propelled everyone into worship.

Loaded up and ready for Church Worship

Upon finishing church, we went out to eat at a restaurant. The use of the word restaurant is generous by US standards, not to say the food was bad. On the contrary, the food was absolutely delicious. What brought question to the term restaurant was the setting. The restaurant was down an alley, past a group of pigeons, to an empty table outdoors. The atmosphere wasn’t hindered by the setting, but improved. My initial skepticism of the food based upon the setting was quickly put to rest. I never knew foods that sound so boring as “rice and beans” could possibly be delicious.

Not your typical restaraunt Food and fellowship

Stuffed as full as we could be with rice and beans, we made our way to the market while nervously practicing our predetermined lines of how to order various foods. Once we had obtained our determined item, we set out in the back of the trusty (and smoking) pickup truck. We arrived at the house of an individual who we had seen at church, playing what could loosely be called a “kazoo.” This kazoo consisted of a caution cone, duct tape, and what appeared to be various engine parts. At the house we learned that his wife was pregnant, and that their child who had been nursing had to stop, causing them to be short on food. On top of this, his wife had been having serious health affects from the pregnancy, affecting her ability to take care of her family. Kids went unclothed and unfed. The level of poverty was hard to deal with, even more so with the knowledge their new concrete house was much better than most houses in the area.

On the way to our next food drop it started raining heavily. Worried about the roads, we headed back to campus. At campus we had a good time of fellowship, talking about the various things that stuck out to different members of the group, as well as getting painting plans set up. Upon our discussion ending, we set to work clearing off walls and chalking lines to prepare for the following day.

The first day in Haiti was full of surprises, excitement, and emotion. Questions get asked, and are generally met with hard answers. Hard sights reveal hard truths, but despite all of this they remained joyous and worshipful. The people are thankful, polite, and helpful. The sermon at the church was about being a light (or so I’m told, as it is in Creole), and the people I came into contact showed it. Even to me, a believer, the level of faith shown was unbelievable; they truly rely on God day to day despite their situations, despite the truths they live with, despite any and all hardships.