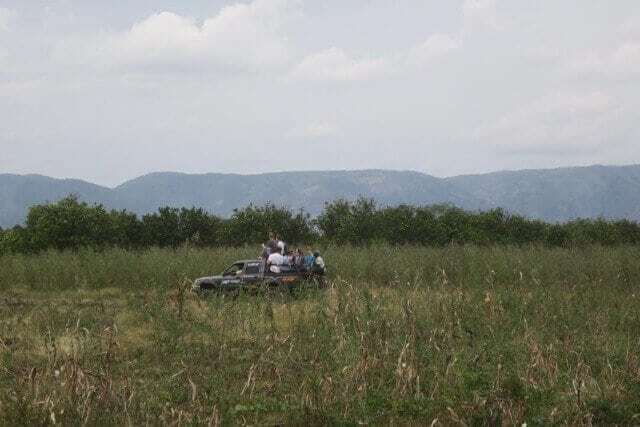 After a morning of transplanting plantains and laying concrete, the Pella Christian High School team pulled together to change the lives of two special people. Keep reading to experience the highs and lows this group shared together. After a full night’s rest, we woke up ready to work for the day. For breakfast we had eggs, fresh pineapple, and bananas. Then, the team split into two different groups: one pouring a cement floor,  and the other transplanting plantain trees (or as Makenna calls them “plantations”).
Group one went to pour concrete alongside a crew of Haitian workers hired by MH4H. The Haitian workers drove sticks into the floor and tied string to them so the floor would be level. Once that was done, we formed a line and passed buckets full of dirt to the house to make it all level. After the floor was level, we formed another line to pass gravel into the house. Then came the hard part. Two of the Haitian workers mixed the concrete together, then we passed the buckets in our line to the other workers who dumped it out and leveled it. Let’s just say it was an arm day. Group two: Armed with pick axes and machetes, we headed to the plantain trees to dig up the extra shoots to transplant to two different houses, five each. At each house, we dug holes for all of the trees and poured in organic matter (not what you’re thinking–it’s sugarcane remnants) to mix with the dirt, which we then watered once the shoot was placed. After finishing, we were able to play with the children of the families, and even taught them Ring Around the Rosie. Since we returned early, we headed to harvest Congo beans on the MH4H compound while figuring out how to eat sugarcane. Preparing the plantain shoot to be transplanted After a lunch of hot dogs, cole slaw, and toffee covered peanuts, the group went together to deliver PET carts to two families. One was a pull cart for a 17-year-old girl who has been immobile since she was four months old. The second was a regular cart that went to an older man, and he and his family were extremely excited and grateful to receive it. A highlight for many was painting fingernails and giving out colorful bracelets to those around while the men assembled the pull cart. On the way home, a few group members returned to the compound, while the rest climbed to the PIGNON sign about halfway up Mt. Pignon. That came with a few falls and blisters, but nothing major. Turns out it was leg day, too. Then, Blake decided to get a haircut at a local barber Cristi recommended (don’t worry, Mrs. Veenstra, it looks good). We arrived back at MH4H for supper, where we ate goat, rice and beans, spicy beet salad, fried plantains, and of course Coke and Limonade. After supper, we shared our roses, thorns, and buds for the day, worshipped together by singing, and turned in for the night. We plan to sleep like rocks (just ask Mr. Anderson -he didn’t wake up at the breakfast bell this morning).
Written by: Amanda Harrill and Kandace Hofman