This blog shares the daily happenings of a multi-church group from Pella, Iowa, currently serving on a short-term mission trip.

We all drove to the Sylvain campus today to help with the Thrive program & build bunk beds.  The beds are for the new guest house that is being built for mission teams that come to Haiti to serve. Thrive is the feeding program for the infants & toddlers as well as the mothers in which a meal is provided for the mothers and the children. Today the ‘Meals from the Heartland’ were served.

It was so amazing to see the mothers listening to the skit that the volunteer children had planned. The story of Shadrach, Meshach, & Abednego was acted out by the mission team. Three Jewish men would not bow down to King Nebuchadnezzar & he ordered the three men into the fiery furnace. They did not burn up and were joined by what appeared to be a man.  Actually, it was Jesus who was there protecting them.  Seeing that, the king spoke a decree & blessed the God of the three Jewish men.

The team puts on a skit for the Haitians

The children who were on the mission trip used their artistic talents to build a true set that represented the story so well that the mothers understood & enjoyed the message that was presented. It was also beautiful to hear the harmony in the voices of the mothers singing & praising God today. The children were playing with toys that had been given to MH4H from the Spencer thrift store. 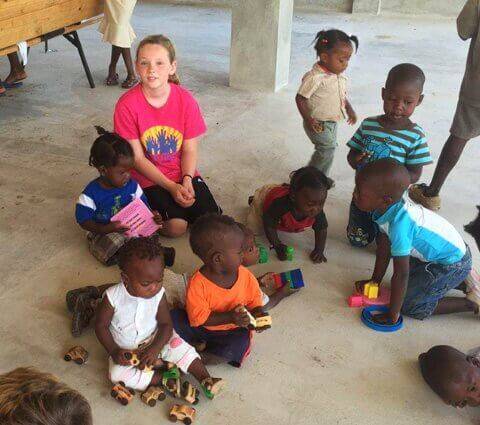 Playing with the children of Thrive

Kids are enjoying the new floor in the Equipping Center

One of the team members is a nurse & was asked to look at a toddler & two of the mothers who had recent health issues. By God’s provision the nurse had brought the medications needed.  We Praise God for His mighty work in their situations. She was able to share the story with the other team members.

Finally, the team completed 9 sets of bunk beds & almost completed 5 more. This will be completed tomorrow, with God’s help.

We thank God for the numerous programs that are taking place in Sylvain, Haiti.

The goats in the field at the campus