This blog shares the daily happenings of a multi-church group from Pella, Iowa, currently serving on a short-term mission trip.

After devotions at Sylvain and a wonderful breakfast of fresh fruit and eggs back at the dorm, we loaded up our group into the truck to find the various children that are sponsored among our group. This sponsorship allows the children to receive an education. Aside from sponsorships, the cost of school is too extensive for most families to afford. Woody had called the schools ahead of time and we were able to not only meet with the children, but many of the mothers of these children were there as well. It was a joy to see these children and to see them enrolled in school. We spent some additional time talking with them, watching them jump rope, showing them their pictures on our phones and kicking the soccer ball a few times before we travelled back to Pignon. I think this experience was especially impactful as there were five U.S. children with the team; seeing what schools are like in Haiti was a great experience for them to understand how differently school is done here.

Andrew poses with a little Haitian boy Abbi and a shy girl Carl enjoying the Haitian school experience Another of the young members of our team, Silas Woody (center) speaks to the kids at the school

Before returning to the dorm, we visited a home that Many Hands for Haiti had helped make for a local family. Their previous home was made of mud and sticks, it rained in often and the family of five had a mud floor. Concrete floors are easier to clean, but furthermore will prevent the spread of disease. This two-room new home will allow them to sleep in beds that are dry and to reduce the risk of disease spread through the damp conditions. We were able to pray for this family and help them dedicate their home to the Lord. These experiences helped all of us to put a face with who we can make a difference for. When poverty seems too overwhelming, we know that at least we are helping one. And today we saw the ones that we are making a difference for.

New house for Tibens and Annya

In the afternoon we completed the building of the bunk beds and also worked on some bookshelves for the new Sylvain building used for the Thrive storage area. Meanwhile a couple members of the team traveled to some local homes to visit sick, pray with families and service them with some basic medical needs. There was an infant who had been sick for four days, he was terribly dehydrated, had a fever, and was unable to sit-up. After having some electrolytes, clean water and Tylenol, and being prayed over, this little boy was sitting up! Neighbors gathered around in amazement as this little boy had been very ill and was now sitting up and smiling. With limited Creole a member of the team could only explain by saying “Jezi renmen ou,” (Jesus loves you)…truly God is amazing and His Word will be heard all throughout.

Throughout the day a great amount of soccer was played by the local children and by our five children on the team. The amount of language that both Haitian and American children are learning from one another is amazing. Without the language, they adapted well and managed to score many goals on each other clapping hands and exchanging hugs and smiles as teammates. This reminds us that serving the Lord is not bound by age, by region, by language or by ability. We can each make a difference to at least one person each day, we just need to be open to who and where the Lord is leading us.

Henry and Marci with Youmaele (middle) 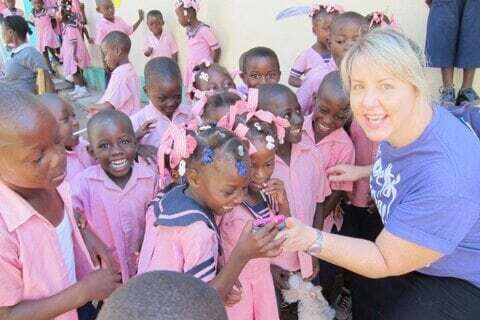 Kids laugh as they see a picture of themselves. Many don’t even have mirrors