Carly Anderson shares about the team’s day exploring Pignon as they gain insight into Haiti and it’s culture.

Bonswa from Haiti! Today was another amazing day. We started off our day with some fried French toast by our amazing cooks. We all got dressed and climbed in the truck headed for the market.

We went to the market, and separated into 4 different groups. We each had a Haitian translator in our group. We split up and walked around, taking in all the sights, sounds, and smells, some of which were not so pretty! 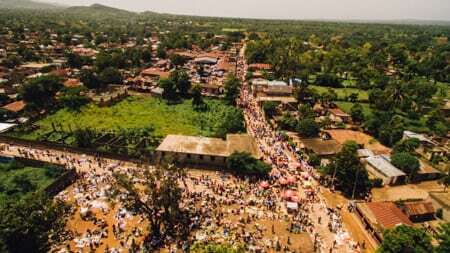 The market in Pignon

We all met back at the trucks, and loaded back in. We picked up a mattress and bed frame for one of Liz’s friends who had his leg amputated. His name was Jocelyn. He was going to live in a different house, so we pitched in and helped move the mattress.

The roads getting home were a little rough, but we got there! We came back to the compound, and talked for a little while, and then the cooks called us in for a lunch of tuna salad, coleslaw, and leftover birthday cake from yesterday.

Christi gave a list of jobs that needed to be done around the compound. We all chose what jobs we wanted to do, and we split into groups. Some of the jobs were cleaning the gazebo, Thrive Building, and the new Yellow Iron Academy building, sanding and varnishing, and finishing the new clothes line. The buildings were spotless, and the clothes line looks pretty good. They almost finished the staining and varnishing.

The Spencer group sent their video to their Bible School back in Spencer. They won’t be there for this week, so they decided to send updates about Haiti. The money they raise goes to Haiti, so they get to actually see where their money goes!

We went to the Suspension Bridge after a while. Some of us were hesitant to cross, but most of us eventually crossed. Some of us were a little scared at the holes in the sides, but we made it there and back! On the ride there, the sky was a clear blue.

When we left, it was dark. We hustled to the truck, and our drivers went as fast as the trucks could go! Good thing there is no speed limit in Haiti! For some of us sitting on the top, that was not the best ride for them! We all had a good time, even though the ride was rough.

View on the way home

We came in and had a supper of noodles with lots of spice! After supper we all went outside and watched Woodson 1 and Roodson 2 knock down mangos from the tree in the back. Most of us had a mango for dessert!

After we came inside, most of us took showers, and then we had devotionals. We watched a video, and talked about the day. Then we had a practice session for church in the morning. We were asked to sing, and we decided on No Longer Slaves, and Holy Spirit.  We have a guitar and keyboard player, and the chorus learned No Longer Slaves in Creole! We practiced for a while, and then we came down. Some of the group went to bed, but the rest of us stayed up for a while.

We had a good day today, and we are really excited to see what the next few days hold in store for us! We all miss our family, and we all say hi! Bondye Bon! (God is good!)