Ride for a Cause – Making a Difference 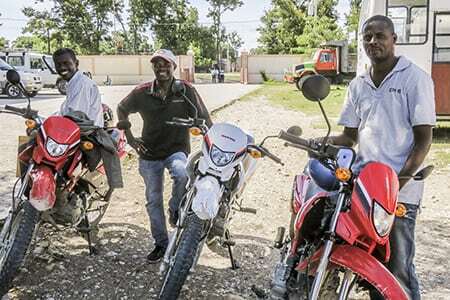 Purchasing the Ride for a Cause Motos

The journey from Pignon, Haiti to Port au Prince and then on to the city of Leogane, where the Ride for a Cause Motorcycles would be purchased, is no easy trek. With cash tucked in various pockets and pouches, to thwart any robbers, we traveled to Port via public transportation bus through the rivers and over the mountains, winding and bumping all the way.

Early the next day our Haitian friend, Wilkin, met up with us to be our transportation navigator to get us to the Dayun Dealer in Leogane. First was a public transportation van for 15 gourdes per person to take us to the bus station for Leogane. 15 gourdes is less than the value of a quarter in US currency. Next was a SCHOOL BUS where we waited nearly an hour for it to be packed full, 3 people to a seat, all for 35 gourdes, just over two quarters worth.

Another hour later we arrived at the bus station in Leogane and then hopped a moto taxi to the Dayun dealer. We had called ahead so the transaction went smoothly. The three brand new, bright red bikes would be delivered to the Central Plateau on Monday. Moto taxi, school bus, public van and we were back in Port au Prince.

Selecting Recipients for the Motos

We were praying about the daunting decisions that were to come. One morning, kind of ‘out of the blue’, we said we felt it would be a good idea to go to visit a friend, Harry, who is a missionary working with church plants about an hour away from where we live. Friday, September 2, we traveled to San Raphael to meet up with our fellow missionary friend who has served there with his family for 12 years.

We visited together for a while about various ministry efforts and then opened the subject of what had been our reason for coming. We told Harry and his wife about Ride for a Cause and the huge gift which was available. We asked if they would have any suggestions on a pastor with integrity who was working in the countryside, in a remote area, whose ministry would be greatly enhanced if he had a motorcycle. It took Harry about 2 seconds to say the name Pastor Chavannes. Harry knows him well because he helped plant the church in Logalit Ravine Jobert, where Pastor Chavannes has served since 2009. Just that week on Monday they had prayed together about transportation needs for the ministry. Transportation has always been a challenge. Harry said at one time he gave Pastor Chavannes an old motorcycle that seemed to be no longer usable. Pastor Chavannes drove and drove that old moto. In Harry’s words, he drove the moto “until it turned to dust…he swept up the dust and kept driving!” By the way, that Monday when Harry said he and Pastor Chavannes were praying, we are confident that was the moment we were prompted to pay a visit Harry in San Raphael.

The following Sunday, Sept 2, we planned a visit with some other missionary friends who have lived in our area for nearly 10 years. We had a similar conversation with Colin and Carla and they too immediately knew of a Haitian man, about 40 years old named Jonathan Israel who is kind of a self-proclaimed evangelist working in the Bohoc area. We asked if they could talk with him to let him know of the offer. The next day we heard their story of how they were telling about the gift available and Jonathan wasn’t grasping the concept. Finally, when he understood that this would be HIS motorcycle to use for his evangelism work, Jonathan was so overcome he insisted they stop right then and pray with gratitude that God would choose him. Later he shared how he had been praying for just a month, “God, if you want me to reach these people you have shown me, You must provide a way for me to get to them.”

So two out of three recipients were identified. Nailed it! They were exactly the people we were looking for. Now to find number three. We prayed, and searched, and pondered, and racked our brains. WHO could it be? Early on in the process, just after finding out about this opportunity, a certain pastor had come to mind, BUT we just weren’t sure. Some days we thought YES, other days we doubted. One day this pastor came to us with a story that we weren’t sure we could believe. If this story were true, then this was the answer to our prayers and hands down this man should be a recipient. If the story was not true, then this would put in question the man’s integrity which would have to disqualify him. One morning during devotions with MH staff a scripture passage was shared that when read in The Message translation says, “Faith is having confidence in things you have not yet seen.” Continued debate in our minds went on until finally we decided that maybe THIS was our answer. Maybe WE needed to have confidence in the things we have not yet seen. In other words, we needed to trust God on this one. We didn’t have the “nailed it” feeling but we knew that God would make it right!

Each recipient was notified and all arrangements were made to get motorcycles put into the individual’s names. The motorcycles along with each person needed to be present at the OAVCT government office in Hinche, a community a mere 15 miles away but an hour drive time on the Haitian roads. So on Thursday, September 8, the paperwork was done. Hours later that day we sat together and made sure each man understood the arrangement. Jonathan spoke out to say what a beautiful ministry Ride for a Cause is. He said we couldn’t imagine his excitement, “If you could see inside our hearts!” He encouraged Ride for a Cause to keep going with this ministry so others could have this incredible resource for sharing the Gospel. “God bless them and their work and their families!”

Together in the OAVCT office getting the proper paperwork completed

We will reconnect with each of the recipients as we can. For sure in 6 months or so we will check in with them and get an update sent to you on the ways God has used them to advance the kingdom.

Good afternoon. I am Pastor Elisee Vilbon from New Friends Church. I greet you in the name of our Savior Jesus Christ. I am doing well by the Grace of God. I consider you like a father of faith in God for why you would give me the gift of a motorcycle and you do not even know me. I had to walk 20 kilometers to go to my church but now I am Blessed because you sent this motorcycle. I will give my service back so we can help the brothers of the church of Jesus Christ because burdens are very heavy in Haiti. The Many Hands staff are good people to have, they help others in need and we work together in Haiti. Our Church sends our greeting to everyone that made it possible to buy motorbikes for pastors. For four years I walk on foot to serve God in my church even when the sky was dark. God bless American people for their work they’ve done in Haiti.

How Our Motos Help Make a Difference

Many Hands Chaplain Lumanes, and MH employee Jean Willio setting out to deliver food to a family in need. Days earlier a family in a nearby community came to Christ and this gift of food is a way to encourage them during difficult times. The three wheeled motorcycle has been a work vehicle and a people mover. It has paid for itself many times over because it saves vehicle rental money on a weekly basis. MH Security Guy, Kalo, driving this moto home for the first time from the dealer in Hinche, Haiti. This will be used for numerous logistical tasks from transporting people, goods, food, etc. to help MH serve the area people.