This is written by Josh and Paige Konoza, of Pittsburg, PA. They were married late summer and decided to go serve with MH4H in Haiti for their Honeymoon. This is both of there first time traveling to Haiti.

Today we started our journey to Haiti at 3:00 AM, driving to JFK airport. The traffic in NYC is awful; little did I know that it would be comparable to Port-au-Prince – more on that later. We got through security and went straight to our gate. A steady flow of passengers for the flight arrived over the next several hours, that by boarding time, we felt as if we had already arrived in PAP with everyone speaking French and Kreyòl. After an uneventful flight, everyone on the plane clapped, cheered, and praised God as we landed in Haiti. We grabbed our bags and after dismissing several cab drivers who all claimed to be our long lost friend, we found Zeke. 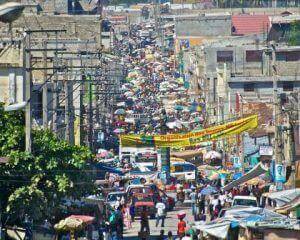 A scene from a Port-au-Prince street.

Traffic in Port-au-Prince should be in the explanation of organized chaos whenever it needs further elaboration. It seems as if there is no rhyme or reason when people stop, go, honk, pass, signal, etc. From PAP, we drove the 4 hours to Pignon on Route Nationale #3. Half the road is paved, while the other half is currently dirt and being worked on. The stark contrast between the city we arrived in and the countryside of Haiti is breathtaking. 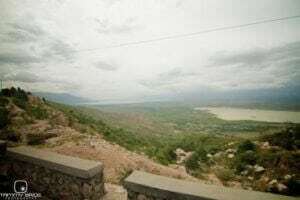 View of the mountains, lake and greenery on the road from PAP to Pignon.

Although we both have been to a number of countries, we both are in agreement that Haiti is one go the most blessed countries when it comes to beauty. The Lord surely knew what he was creating when he made this wonderful place. Hills, mountains, rivers, lakes, forests, and plains all glorifying his name as a choir. After our beautiful tour of the country, we arrived in Pignon just as it was getting dark. We got to our house in the hospital complex and barely had enough energy from traveling to bring ourselves inside. It’s a beautiful home and we are looking forward to resting our eyes under this roof that God and MH4H have provided for us. To be far, this place is a lot nicer than some of the places we have stayed during our travels. The generator shut off last night about 4 minutes after Zeke left us. Luckily, we had gotten headlamp and Paige had practiced cooking with it in the dark in Pittsburgh. We filled our belly’s with pasta and fresh bread. And with that we closed our eyes to dream about what the Lord has in store for us tomorrow. Bonne Nuit!