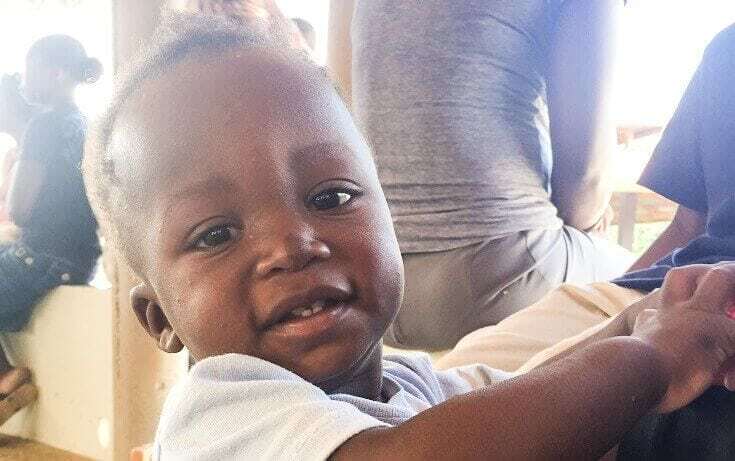 As the Thrift Market Team wrap up their trip in Haiti, Micah Aurand is fortunate enough to meet her sponsor child and his family.

It was a little after 11 o’clock Tuesday morning in Sylvain, Haiti and the Thrive for 5 participants were gathered for lunch. I, myself, sat along the back wall – an unintroduced visitor. My pale skin quickly turned the spectator into the spectacle.

One brave four year old girl ran straight for me. Eye to eye, she silently demanded all my attention by framing my face with her small brown hands until her mother called her away. Drool spilled freely over the toothy grin of a toddler as I bounced him on my lap singing, “Raw macaroni tia tera!” It’s a silly song that I learned as a child. Two or three other children zig-zagged back and forth in front of me. Too timid to greet me directly yet bold enough to show off both for the blanc (white) visitor and for their shy classmates who were watching from a distance. So many adorable faces! There was one face in particular that I desperately wanted to see – Kervensky. For the next twenty minutes of the Thrive program my eyes surfed the crowd looking for my sponsor child. “Is he even here today?” I asked one of the staff members. Before long, a mother with three children slid into the front row. The oldest sibling held one sleeping baby while a twin gazed around from the safety of his mom’s arms.

Kervensky at the Thrive for 5 program

When I became Kervensky’s sponsor, four months prior, I received a picture of him. Now sitting before the twins, I was fairly certain I knew which twin was which. Kervensky and I studied each other. A smiled escaped from him showcasing four front row baby teeth. I knew that I would see the family later that afternoon so when asked if I wanted to hold my sponsor baby, I decided to wait. I didn’t want him to cry because a stranger was holding him.

A few hours later, my team pulled up beside the cactus fence – a common barrier that lines Haitian yards. “Bonswa!” we called. Good evening! The family was already in the yard. I was more nervous than I thought I would be entering the mud and stick house. I wondered how it would feel to have a stranger from a foreign country bring gifts of food, soap, clothes, and treats to my home and ask to see and take pictures of my twelve month old son. Mwen pa pale Creole. I don’t speak Creole but my heart begged them to understand that I cared for them even before I had met them. I wanted them to be healthy and strong. I wanted their needs to be met. Most importantly, I wanted them to know the God who could provide all these things. Ten minutes and a prayer of blessing later, we were on our way.

There are several things I consider precious in my life: my family, my friends, my relationship with Jesus, and this little boy who lives 2,000 miles away from me in the country of Haiti, in the outskirts of a town called Sylvain. Today I met Kervensky. Today my heart grew a little bit bigger.