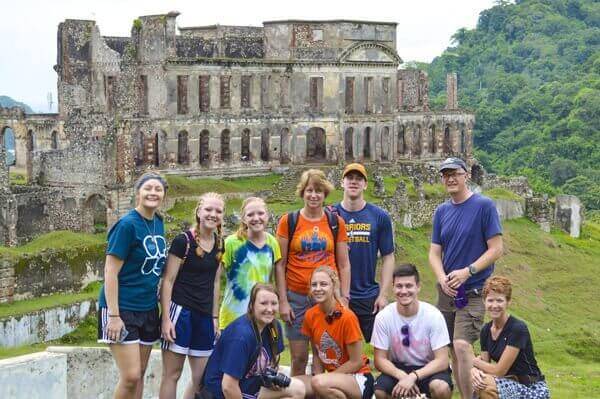 The Trinity College team experience the beauty and history of Haiti as they visit the Citadel.

Today was like every other day here in Haiti, truly unique and special. We woke up before 5am to get a good start on our journey to the Citadel.

The Citadel was a Haitian fortress built in 1805 right after the Haitian people revolted and gained their independence from the French. With a nation of people suddenly in control of their own destiny, a local bread maker (Henry Christophe) from the north declared himself king over the land. Legend states that King Henry was a very cruel and paranoid man. He forced twenty thousand people to build him a palace and fortress up in the mountains so that he would be ready if the French ever returned for their land.

The group in front of the Palace

Our tour guide informed us that of the twenty thousand people forced into slave labor, ten thousand of them died during the construction of the great fortress. To even get to the fortress it is an incredible hike as it sits at the top of a mountain so King Henry Christophe could see the major cities of Haiti as well as the ocean. The king finally drove himself mad with paranoia and took his own life out of fear of the French’s return.

As we walked through this incredible historical landmark and observed its immense beauty, we pondered the story and how it is so applicable to the state of Haiti today. Haiti may have become an independent country in the early 1800s, but it is clear that they never truly gain their independence as a people. From natural disasters to suppressive dictatorships, the people of Haiti have been beat down and diminished for centuries, all the while showing incredible resilience and strength. It was truly eye opening to get to learn more about the history of Haiti and its beautiful people.

As we were discussing our favorite part of the day later that night many people commented on not just the beauty of the Citadel of the beauty of the land as we traveled to the fortress. The journey there and back consisted of a 3.5 hour ride each way in the back of the truck. While our bodies may have been sore from being tossed around like a rag doll, the trees, waterfalls, mountains, and people that we experienced were priceless. In a country with so much pain, there is also so much beauty. On our way to the Citadel, we had the opportunity to stop by a local street vendor for some breakfast. It was an incredible experience as we were able to sing with these ladies on the street and enjoy fresh coffee out of whatever container they had most readily available.

Stopping for an early morning breakfast in Don Don

Overall the day was filled with incredible beauty as we learned and experienced more of the Haitian culture.