We Were Called to Bless 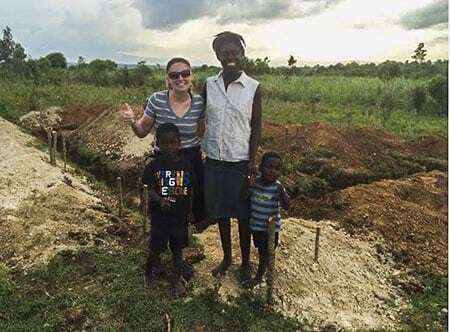 Katelyn Kime shares the calling the Lord lay upon her and the Pella/Spencer team, as the situation of one family impacted their hearts.

One of the days last week, when the Spencer/Pella team was down, we did food distributions in the surrounding communities. That day we split into Pella and Spencer teams so I went with the Pella team.

There was one family in particular the Lord put on our hearts. A family of four lived in the house. Jesula the mother, her two sons Roberto and Vilano, and the grandma. They lived in what I would call a shack. It had dirt floors, no windows or doors, and leaks everywhere in the roof. I took one glance in the house and it broke my heart. On the way back from distributions we all talked about how we wanted to bless the family in some way.

Jesula, Vilano, and Roberto next to their house.

After we all prayed about it and discussed among each other, we decided the Lord was calling us to bless the family with a new house. We talked to Craig and Christi about this idea and got an estimate of what a new home would cost. We decided the amount due was something we were able to do and we all pitched in. The last day the Spencer/Pella team was here, those who went in on the house went back to Jesula and her family to tell her the news. We told her that the Lord put it on our hearts to bless her and her family with a new house and that it was a gift from the Lord. The expression in her face told it all. She was so happy and started praising the Lord saying “Bondye bon” God is good.

Last Saturday, Craig, Christi, and I met with the boss they hired to do the house. We asked him when he could start on the house and he responded with right away on Monday. Praised be to God! At the beginning we weren’t even sure if this could get done right away! By the grace of the Lord, he has been faithful in planning it all out.

Yesterday was the big day! They started on the house and it should take about ten days. I went and visited in the afternoon and day one was successful with the foundation all dug out. When the house is finished, it will have three rooms, six windows, two doors, a cement floor, and a roof.

Thumbs up and praises to God!

I’m excited I’ll be here for this process as I’m here through the end of the month. If all goes well I should be able to send progress reports along the way. Na We Pita zanmi mwen “see you later my friends”