Today the group split and went two different directions. The goal was one group would present at the Youth Leadership Conference in the morning and then deliver goats to surrounding community members after lunch. The other group’s objectives were to visit the Pella Christian grade school and then present at the Youth Leadership Conference in the afternoon.  To get the full Haitian experience, we walked to Pella Christian which was a little over a mile while taking in all the surroundings. With the rainy season just starting, we had fun balancing on the concrete edges of the road to avoid all the squishy mud and puddles.

We finally arrived at Pella Christian School which sits in a beautiful location with the mountains in the background.  We got to sit in on each classroom and ask the kids what they were learning and their favorite subjects in school and then played math games with each classroom individually by using our group members to do addition and subtraction. It was really cool when we talked with the oldest kids about what they wanted to be when they grew up and many said teachers, nurses, and business men and women.  It was special being able to see how the school is making it possible for the kids to achieve their dreams and set goals for themselves. We then played outside the school with all the kids and had a blast blowing bubbles, playing soccer, and getting swarmed by the kids while handing out bracelets. After a fun but chaotic 2 hours at the school, we then headed back to the compound.

Above: The morning group at Pella Christian; Below: Nick Rohner shows a picture he took to the students at PC.    Above: The team also acted out the story of Jonah for the Pella Christian students. In the photo, Jonah is getting spit out by the whale.

While the one group was at Pella Christian, the other was kicking off the first day of the Youth Leadership Conference. This is the first time a conference has been put on to pour into the youth in the community, so we were all a little nervous at being the first to teach these young adults when we were the same age as they were, if not younger in some cases. Our topic was “Walking with God,” and each of the girls in the group presented a new way of looking at scripture, worship, praise, and abiding with God. We used discussion questions, singing, a skit, and even a dance to apply the topic in different ways. Though we felt really disorganized at the beginning, God really pulled through in the morning, and it seemed like everyone was really paying attention and appreciating what was being said. At the end of the morning, several people in the crowd got up and gave testimonies about how God had impacted them that morning. It was humbling to hear what they had gotten from what was said that morning. 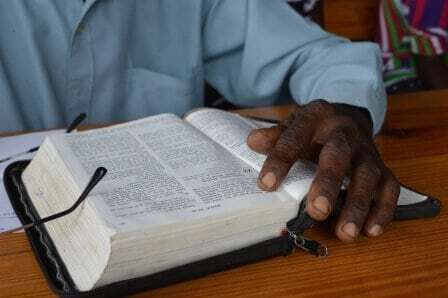 Above: The house was packed for the youth leadership conference!

The topic for the afternoon part of the conference was “Obedience to God,” and following God’s obedience, the group found themselves adjusting to what they felt God was putting on their hearts. The conference began with some worship and led into a skit of the story of Abraham and Isaac. Joe then spoke about being obedient to God by surrendering everything to Him and how we must let go of things such as guilt, hate, and worry in order to do so.

Above: Acting out the story of Abraham and Issac.

As a way to challenge the young people, the group wrote those three words guilt, worry, and hate on concrete blocks. The young people were invited to come up and write their names on the blocks as a way to release what was keeping them from being obedient to God. This was extremely powerful as more and more young Haitian’s and our group members went up to write on the cement blocks. This led to a young man giving his testimony which was very moving. To wrap up the conference, we all gathered in praying for the Haitian’s individually by laying hands on them. God did some really amazing things this afternoon as His spirit filled the room.

In the afternoon, the other group was assigned to deliver sponsored goats to families in the community. When I first heard that goat distribution was on the list of things to do, I imagined all of us trying to lead a herd of stubborn goats down a dirt road somewhere. The reality of the experience was about just as entertaining. The ten goats were loaded into the back of an extended-cab pickup truck, our group crammed in the back with them.

The trip to the first house was quite an experience, bouncing down the rocky dirt road trying to stay in the pickup bed while keeping the squirming goats from stabbing us with their horns. We were very happy to see the back of a couple of those goats. All humor aside, it was a great experience to be able to give each family a goat. All of the goats were females, so each family will be able to get milk from the goats, as well as their future babies to sell or butcher later on. The main condition is that the goat’s first baby goes back to Many Hands for Haiti to give to someone else so more families can have goats.

There are many more things we could have written about today – we have only scratched the surface of what happened and what God is doing down here. It’s been an amazing past couple of days, and we can’t wait to see what God has in store for the rest of the week!

Want to hear what it sounds like to be in Haiti? Then click here to read more from this team!