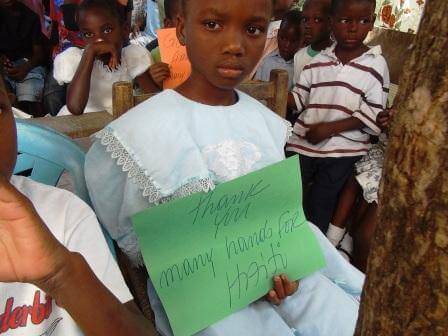 Baby, Zeke, Paige and Josh arriving at the VBS site. We did this VBS with the community around the Spring.

This was definitely our “Big” day of the week, as our preparations as well as Zeke’s and the community leaders’ finally came together to provide a day of VBS for over 100 children as well as the caregivers and volunteers. After Zeke and a friend got speakers secured in the trees, the sound system was up and running, and the children’s patience was rewarded as we enjoyed an array of Caribbean music. The young girls that had been practicing earlier in the week performed a welcome song, of which I could only identify the word “Bienvenue”; lucky for me, this word probably occurs over 20 times so I got the gist of things. They sang a number of songs in addition to this one, as well as performing skits with some over the other children. The skit we all seemed to enjoy most was about a wife who sets out lunch for her husband, only for another boy to sneak in and eat from his bowl when no one is watching. Eventually the man hires security to guard his food and find out who has been stealing from him. This leads to the thief being caught and getting a beating from the guard. As I couldn’t understand the dialogue, I’d say the moral of the story was not to take that which is not yours. Pretty universal.

A group shot of the kids from the front of the make-shift tent.

One of our favorite parts of the day was sharing the “salvation bracelets” with them for our craft time. Luckily we had more than enough to make sure all the children received one, and there were cards to accompany them in Kreyòl that used scripture to explain the color of each bead. Zeke was able to read through the card and explain the meanings as the rest of us worked to help the children get the put together. Afterwards, there were competitions and quizzes of sorts. Children performed recitations that they had prepared for the event, and we had small gifts for those who could answer Zeke’s questions in regards to the meaning of the different colors on the salvation bracelets. The dance competition that followed had everyone laughing and cheering on their favorite participant, generally with the girls competing against the boys and cheering accordingly. It was even funnier to see the smallest of the children, maybe only 2 years old, stand up to dance along and mimic the others. Music and dance are definitely a BIG part of Haitian culture.

A girl at the VBS holding a sign that says “Thank You Many Hands for Haiti.”

After all of the crafts, games, singing, and dancing, it was time to serve the meals that the women had been preparing all morning. Feedings seem to be a very important part of community events, and understandably so. I had been surprised to see the heaping portions the children were receiving as I walked plates back and forth between the “kitchen” and our tented area where the children waited. After nearly ¾ of the children had received their lunches, I began to worry as the plates started to come out at a slower and slower pace. As many believers would, I began to think of Christ feeding the multitudes from just a few fish and loaves of bread, and I said a prayer asking for the same for these children: that from whatever amount was left, it would stretch to feed all the empty bellies that were still waiting. And what do you know, the plates started coming out a little bit quicker and quicker until every last little pair of hands had received a plate of rice, beans, and a small serving of meat. Even the littlest children packed away every last bit… I probably would have been full about halfway through. It was a joy to be able to work alongside others to be able to provide for both the physical and spiritual needs of so many children. Even sharing a seat and holding the sleepy ones in our laps was a great chance to shower them with personal attention and affection.  It was a joy to spend time with the community and to see so many children enjoying themselves.

Josh and Paige sitting at the front during the VBS. Picture from the back of the VBS. A group shot from the from, with the girl holding a sign that says, “Thank You Many Hands for Haiti.”

From what we understand out in the more rural areas of Haiti each day has a market day per say. Where there is a large market and people come from all over to sell their goods. Well, Saturdays are the market day apparently for Pignon. This opportunity for multiple sellers to come to town seems like more of a benefit to the buyers than anyone. From what we are told not only is there more to choose from, but also the prices are considerably less than if you were to go to the market not on Saturday. We decided to spend our leisure day going with Beatrice and Fransly to the market. So we were up by 8 o’ clock and waited for the both of them to come and once they were here we were off to the market.

This is the scene in Pignon on market day.

Even before we got to the vendors it seemed like the town was in it’s own hustle and bustle in the morning, more so than usual. I’ve kind of determined that people rise early enough in the morning to get as much done before the heat gets to them. It seems like things slow down tremendously after high noon. Finally, we turned the corner to where the buyers and sellers had all congregated.  Beatrice went right to work trying to find the bonne prix, best price, for every item on her list. I’m sure that was an even more difficult task with two blans, white people, with her. She managed from what it seemed to haggle the best prices possible as she began accumulating food for the upcoming week.

This duck isn’t going to have a good day.

People here are selling everything from perfume and soaps to medicines to chickens. Anything and everything you could need in Haiti could be found on a market day.  I think it also made us come to the realization of how blessed we are by God for numerous reasons, I’ll share a couple of those now. Firstly, the most obvious reason, we have the financial means to pay for whatever we wanted. I would venture to say that the majority of the population is not afforded this luxury. We want for not, and it’s trips like this that remind us that it is only by God’s will that we have these opportunities. Another important aspect is that people come from as far as 10-20 miles away. Furthermore, many of them walk the distance so that they can make a living and provide for their families. Back home, if I want to go to my job or to get food for our family all I have to do is hop in the car and go. That’s something that is so easily taken for granted. Have we done anything to deserve that luxury more so than anyone here at the market today? No most assuredly not. Too quickly we get caught up in the life we live back home and forget to count our many blessings that the Lord hath provided us.

The donkey parking lot outside of the market.

So from today we take home not only food to feed us for a week, but also an awareness that will hopefully last us once we come back stateside. The Lord is constantly providing things and means to us that we are too quick to overlook. Tomorrow we are going with Fransly to his church and we are both extremely excited for this. We continue to pray for all of you as we know you are praying for us. Till the next time!