This is written by Emily Morley, a member of the ISU trip of 6. She is serving in Gonaives, Haiti this week. This is her first time in Haiti and serving with MH4H.

Today was our last day teaching the children at the school.  We started our day with the dances we taught them yesterday: the Macarena and the Cha Cha Slide.  Then, Colt read the story of Job while Silentor translated.  The kids seemed to really understand the story and its meaning for them as children of God.  After the story, Colt, David, and I took the third graders for the English lessons while Katy, Allison, and Kyle went with the younger kids.  Both groups reviewed the vocab from earlier lessons with a matching game.  Then, we reviewed the alphabet and numbers up to thirty.  The younger kids played an alphabet game where Allison and Katy wrote the letters on the board out of order.  The kids were to see how fast each team could erase the letters in order.  Lastly, David and Kyle led the kids in a game of freeze tag.  The kids really enjoy playing tag and are really competitive.

For lunch, us “blancs” went back to the mission house.  We have gotten into a routine of taking naps during this time.  Since it is the hottest time of day, most people rest; so, we adopted the Haitian way.  After our rest, we went back to the school to plant a garden.  We planted beans, peppers, cucumbers, carrots, peas, and radishes.  By having a garden, the kids will be able to grow and harvest their own vegetables to eat and sell.  We then picked up trash around the land.  We finished the day by watching “Over the Hedge” and introducing the children to candy canes. 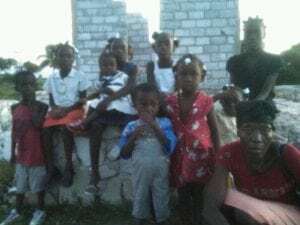 The family of 11 before the house was built.

During the day, Allison and I also got the opportunity to hang out with a little boy named Tigiunta (spelling).  By looking at him, we assumed he was about three.  After talking with Silentor, we were informed that he was actually six and in the kindergarten program at the school.  Tigiunta’s mother had passed away so he and his eleven brothers and sisters live in a one bedroom house made by Many Hands for Haiti.  He is one of the sweetest children I have met this week and will miss him when we return to the states.

Tomorrow, we will be climbing a mountain at 6am.  Wish us luck and expect great pictures from the hike!  Also, Allison wanted me to mention that while she did scrape her foot playing soccer, she made a beastly goal on Kyle… YOLO (You Only Live Once)!