A New House…But God Has Something MORE!

Anderson was able to go to school because of a scholarship provided by a generous family that lived in the United States. Some members of this family came to visit Anderson at his house, they met Venise, they brought some gifts to share, they could see the unstable condition of the house. 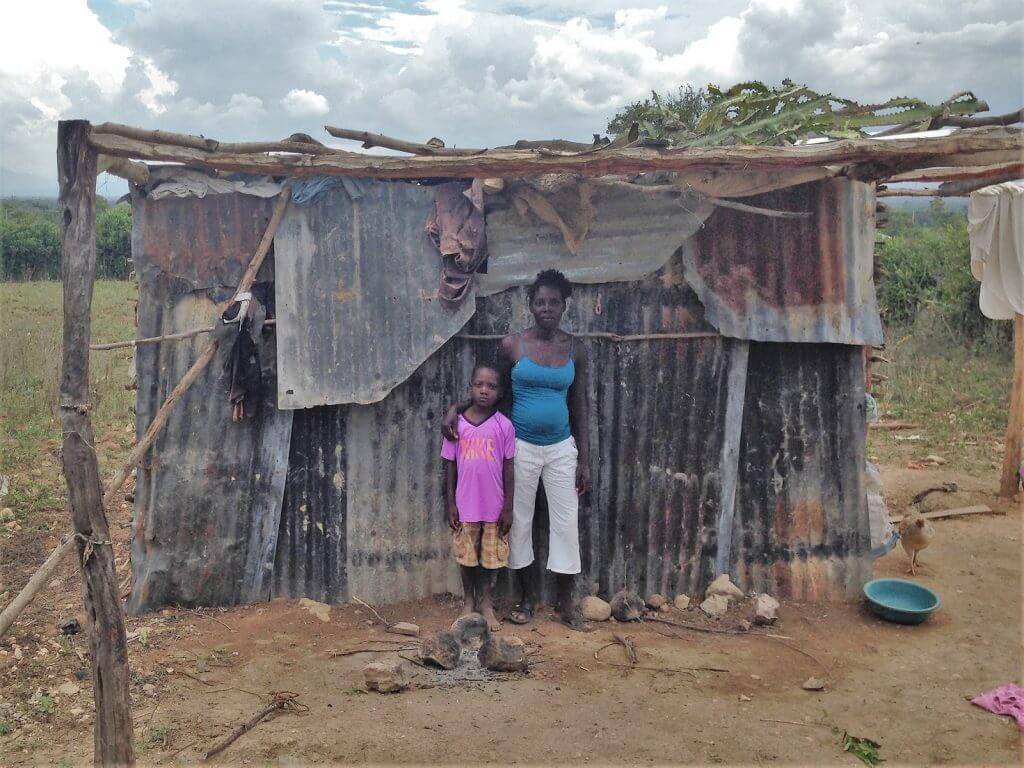 Because of the love of Jesus, the visiting family members told Anderson and his mother that they would like to build a new house for them.

The first thing that needed to be done was to know for sure that the land the house would be built on was owned by Anderson’s family. As the story goes, the land document came to Many Hands for Haiti showing the land to be in the name of Anderson’s grandfather. The expectation was given that the document needed to be in Anderson’s mothers name if Many Hands were to be able to honor the wishes of the family from the United States to begin construction of the new house. A new document was presented and all seemed to be in order.

The day came, early June, for the project to finally begin. The land where the house was to be built was quite a distance from the main road. Materials for the house were delivered by truck but the truck could only get within about one half mile of the site.

Many Hands hosted a short term mission team from Iowa at this time so the concept “many hands make light work” was practiced to get the materials up to the place where the house would be built. The ‘many hands’ part is accurate but the work was NOT light!

This is property with a view! Notice the team transporting block in wheelbarrows at the base of the mountain.

The first thing that needed to be carried were 20 inch concrete block. One block carried by a person was a load, and at most, three in a wheelbarrow. With one-mile round trips in the mid-day June sun, water was a lifesaver!

There was also sand and gravel to transport by wheelbarrow.  Load after load, the team pressed on.

Anderson, pictured above and below far left, was working alongside the team. There were several young boys from the neighborhood working hard too. Also volunteering were three Haitian men, friends of Many Hands, who came to Acassia with the team. One is Kaiman in the orange t-shirt.

Probably without the three men the team would not have been able to carry out the task. The men were able to maneuver the wheelbarrows full of sand along the winding path leading up to the site of the new house. More than one thousand concrete blocks were needed.

Anderson kept working up to the last ‘mile round trip’ of the afternoon. All the block reached the building site and about half of the gravel and sand. The team was hot, tired, thirsty, and hungry.

What a day it was!

With the building materials finally on site, in the days to come, the mason crew made progress.

Old house next to the new house

The land of Acassia has a reputation of being a community without order, lacking good leadership. Many Hands has a history there and knows this to be true. During the process of the house being built challenges arose. Water drums and wheelbarrows were stolen.

Entering the story is the man pictured below in the green shirt. His name is Gilne. He is not Anderson’s father but the father of two other children with Anderson’s mother. It seemed the new house would be home for five people now. Also pictured below is another friend of Many Hands, Woodson. He is reading a message that was sent from the sponsoring family to the family which was soon to be living in a new house

In this message to Anderson’s family, the sponsor indicates she has been praying for the house being built and as she has been doing that she said some spiritual parallels came to mind. She says to the family in the message, “I am praying that Christ will be your firm foundation and the cornerstone of this house and your lives. I am praying Psalm 91 over you and all those working on building the house. Psalm 91 says, ‘if you make the Most High your dwelling, then no harm will befall you, no disaster will come near your tent. For He will command His angels concerning you to keep you in all your ways. They will lift you up in their hands so that you will not strike your foot upon a stone…’ “

The sponsor continues in the message saying, “And just as you will soon be living in a new home, I am praying you will invite Christ to make a home in your hearts.”

Many Hands friend, Woodson, translated these words into Creole for the family to hear as we met with them, brought a few house warming gifts, and prayed together to dedicate their new home to Christ.

The sponsor concluded the message by expressing what a special time this is for Anderson’s family and thanking Many Hands for making their desire for Anderson to live in a safe home a reality and that they are eagerly looking forward to returning and seeing the completed house and family.

Such love! A love that could only come out of the love that Our Father has for His children.

This blog was originally posted by the Many Hands for Haiti Operations Managers Craig and Christi Gabhart. To see more from their blog, visit their website here.