Calvary Day 6: Do for one what you wish you could do for all 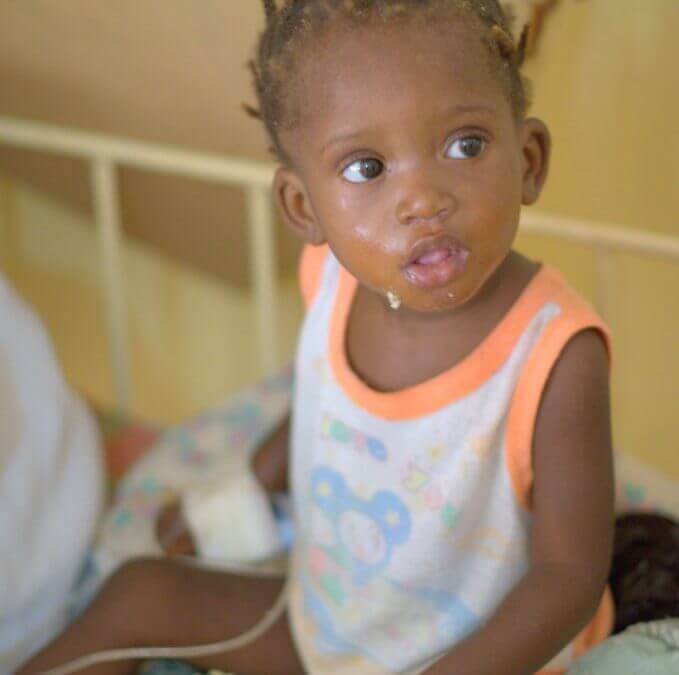 This is written by Donald, Sheldon, Harold, and Twyla Van Wyk of the Calvary Christian Reformed Church in Pella, IA.

Being the only couple, we got a room with no rooster noise, but we are above the kitchen and we’re not for sure what the cooks are pounding on at 5:00 AM.  We’re not going to complain because the food is good and most Haitians have only one meal a day.  Being Dutch, we worry if we don’t get coffeetime!!

The only thing we’re lacking here is Mountain Dew but we’re coping!!  I made some baby blankets, Ruth Mulder sewed some dresses and Trinity  Reformed Church from Pella sewed diapers from T-Shirts.  We didn’t distribute any of these items, but we did meet families that we’ll receive some of these items.  John Robert, who is employed by 5 Loaves (a Promise for Haiti outreach), will get the items to the families.  He is an amazing person with a real heart for the Haitians.  The families we visited, invited us inside their homes.  All their kitchen utensils were on the table.  Most of these homes only have one bed and everyone else sleeps on the floor.

Harold has been helping build PET carts in Leighton, IA  for the last year.  Within the last week, PETs arrived in Pignon that had been in a warehouse for a long time.  We distributed 3 children PETs at one location.  As fast as we could get them together, they were on them and rode away with a smile that reached from ear to ear.  The father of one of the girls was so proud and happy, his little girl could finally get around on her own.   At another location, we assembled  an adult PET for a man who had a stroke.  It took three family  members to carry him to the meeting place.  We prayed  with him and his family.  As we left, his family was pushing his cart while he was learning to crank and steer it over a very rocky, bumpy road.  We’re using the  word road loosely, it’s barely a cow path.   It makes our gravel road look like an interstate!!

We then stopped at a school for the deaf.  John Robert’s cousin founded it on faith.  Many of these children are rejected by their families and now are learning sign language.  Some months the teacher and cooks don’t get paid if donations haven’t come in.  He is running the school completely on faith.  There are 15 students and about 40 on a waiting list.  He opened the school in January 2013.

There are ladies who set up their handmade Haitian items on the sidewalk.  They are very anxious for you to look at their items and are willing to bargain with you.

Jenny and Amber, please give our grandchildren huge hugs and kisses from Papa Harold and Grandma Twyla.  It just breaks our heart that most children here only get one meal a day, have no toys to play with and sleep on a dirt floor.  We keep repeating the saying that “Do for one what you wish you could do for all.”

Our day started with the rooster of course, but I’m on the other side of the house so he doesn’t bother me.  After breakfast, we went to Pella Christian School and put on a skit.  Marty was Goliath, Colin was Saul, a student was David, and Phyllis was the narrator.  It went well until Marty roared and scared the kids!!  I moved a little boy to the front so he could see and then when Marty roared, he ran to the back, so I picked him up and put him on my shoulder so he could see.  After lunch, we went to the hospital for a presentation on what the hospital does and its goals.  We think it’s amazing the number of patients they go through for the size of the hospital.    Then we loaded up 4 PETS and headed out in two trucks to the country.  Then we went a little farther on a cow path.  What a sight and smile you receive when they get on a PET and can moved around.  I never thought my little brother, Harold, would get so emotional over a little girl’s smile after she got on her PET.  We visited several families and they were very proud to show us their homes.  Words and pictures won’t describe what we saw.  A family of six lived in a home 10×16, and has 2 rooms.  They move their mats outside during the day and then inside at night to sleep on.  The floors are dirt.

God has blessed us so much, and I don’t know where God will lead me.

Just an update on the rooster wars.  Last night we were lying on our beds with the light on, solving the problems of the world.  We decided about 10:45 that we better try get some sleep.  Keith reached up and pulled the string turning the light off, and IMMEDIATELY the rooster crowed outside our window.  We couldn’t stop laughing for 10 minutes!! 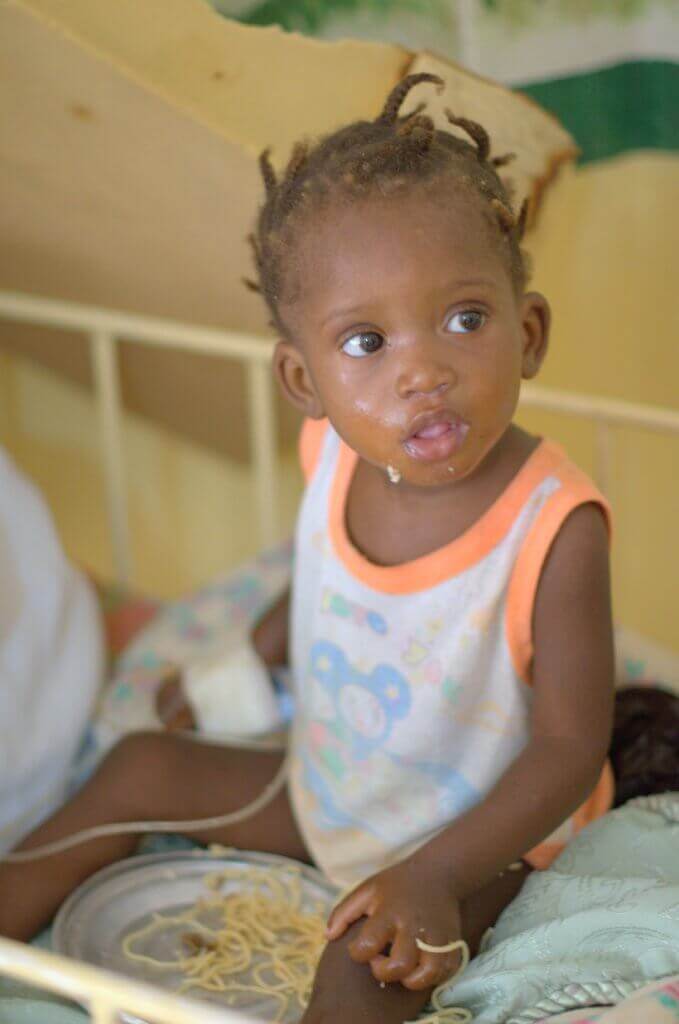 A child patient in the hospital.