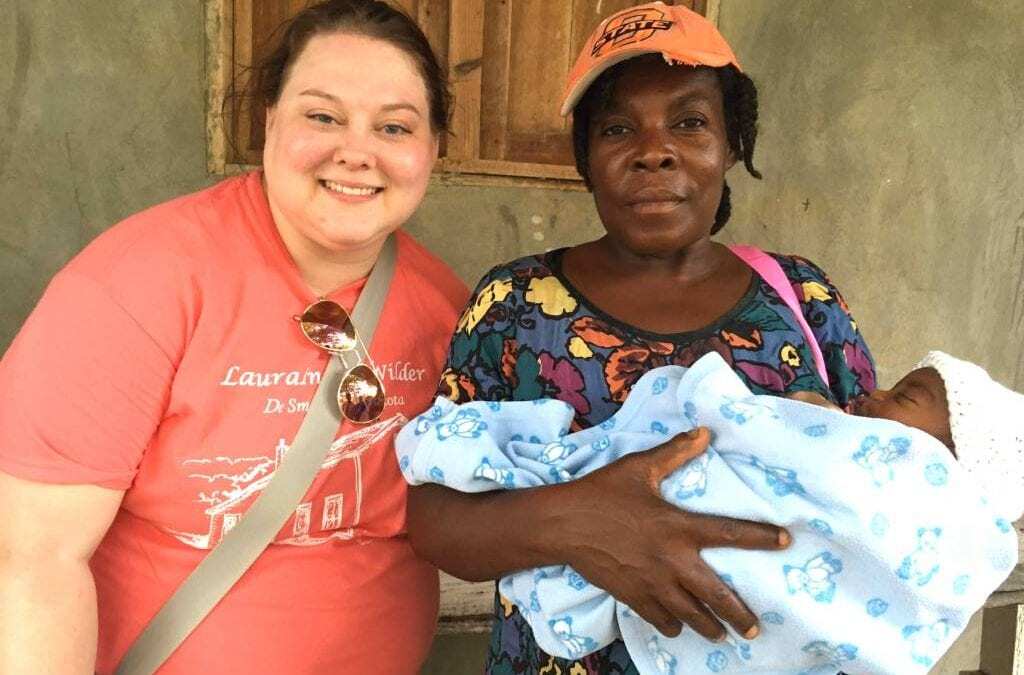 In the North Department of Haiti, two women sit in a stuffy room taking notes and reviewing charts. The office door hangs open to catch what little wind is available. A desk, a table crowded with scales and files, and a few chairs fill the area. The tile floor is cleaned daily though it doesn’t look it due to the dirt tracked in by bare feet. This is Haiti, where 2.8 healthcare personnel exist for every 1,000 people (NCBI, 2015). Visitors to the MH4H nurse’s station don’t mind the floors – they’re here to see the medical workers.

Amanda Banker, a Nurse Practitioner at Sanford Children’s Hospital in Fargo, North Dakota, has been practicing medicine for nine years. Seven of those years were spent as a Pediatric Nurse with the most recent two years as a Pediatric Nurse Practitioner. Ms. Banker made her first trip to Haiti with a short term mission team visiting Many Hands for Haiti (MH4H) in July, 2018.

Within hours of arriving in country, Amanda’s heart was gripped by a baby girl named Joujou. Four-day old Joujou was born with a cleft palette. Due to this abnormality, she had not been able to nurse since birth. Out of desperation, Joujou’s grandmother brought her to MH4H’s gate, asking for help. Amanda joined the MH4H staff to take woman and child to a near-by clinic experienced in similar cases. There, she herself gave the baby an examination and verified that the grandma understood how to use the special bottle and formula which would help the infant suckle.

Through out the week, Amanda would have contact with multiple sides of the Haitian medical field which opened her eyes to the country’s need. Having dedicated her life to helping children, Banker realized that she had a specific skill set which could meet a need in Haiti. After telling the Lord that she was willing to go, the door was opened when Amanda offered her expertise to volunteer as a medical consultant in MH4H’s Love In Action Initiative (LIA). 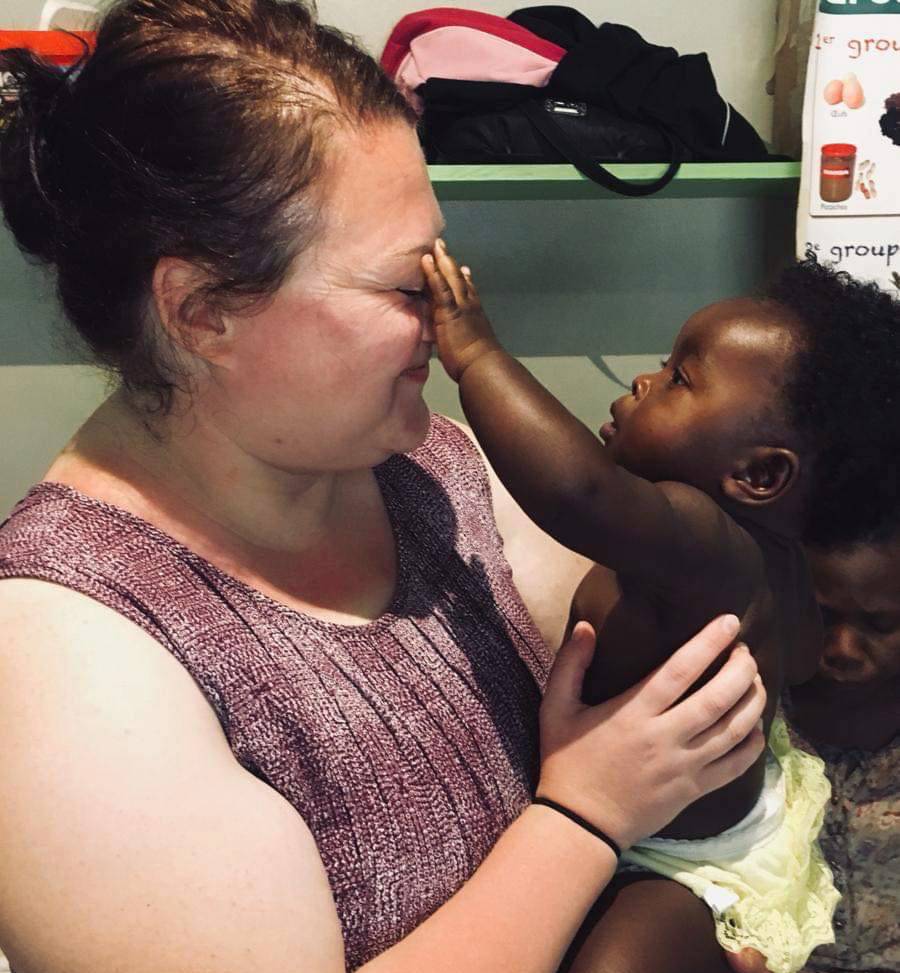 On average, 7% of Haitian children die before reaching their fifth birthday, largely due to malnourishment and disease. One in every five Haitian children is malnourished with the physical and mental effects of childhood chronic and acute malnutrition being irreversible. (Meds & Food For Kids, 2019) The cycle of generational poverty continues on as stunted children grow up without the physical capacity to better themselves, giving birth to more children who will live and grow in the same situation as their parents and grandparents. Unless the cycle can be broken. 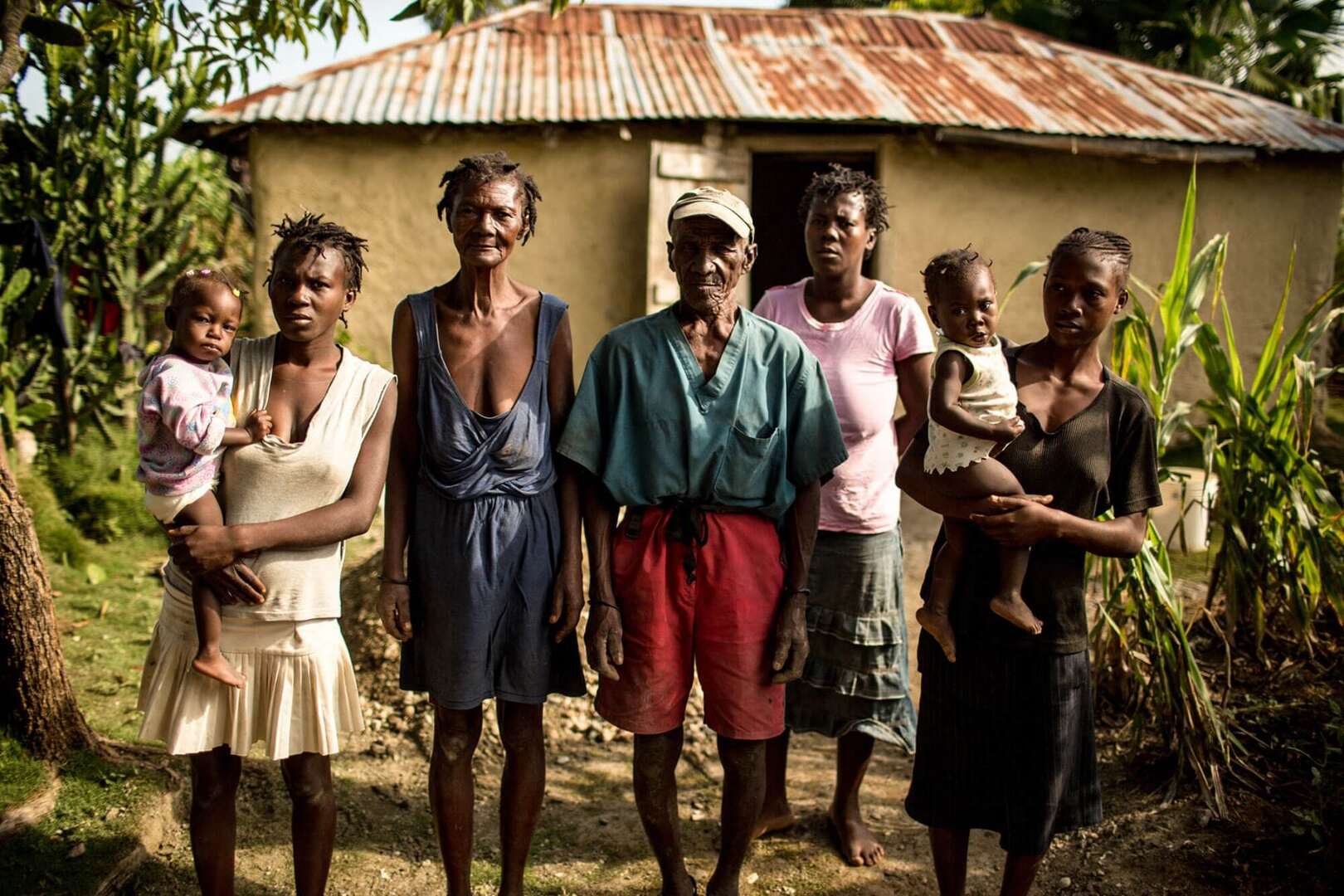 “We’re focusing on the preventative side of things” Banker clarifies. “It’s easier to prevent something than to have to treat it and so part of that is where the Well Child Exams come into play. The best way to prevent something is that you’re regularly seeing kids and monitoring their growth and development. And you’re also forming the relationship between the parent and [the health-care provider]…We just want there to be open communication so if [the parents] have a question, they can come and ask.” 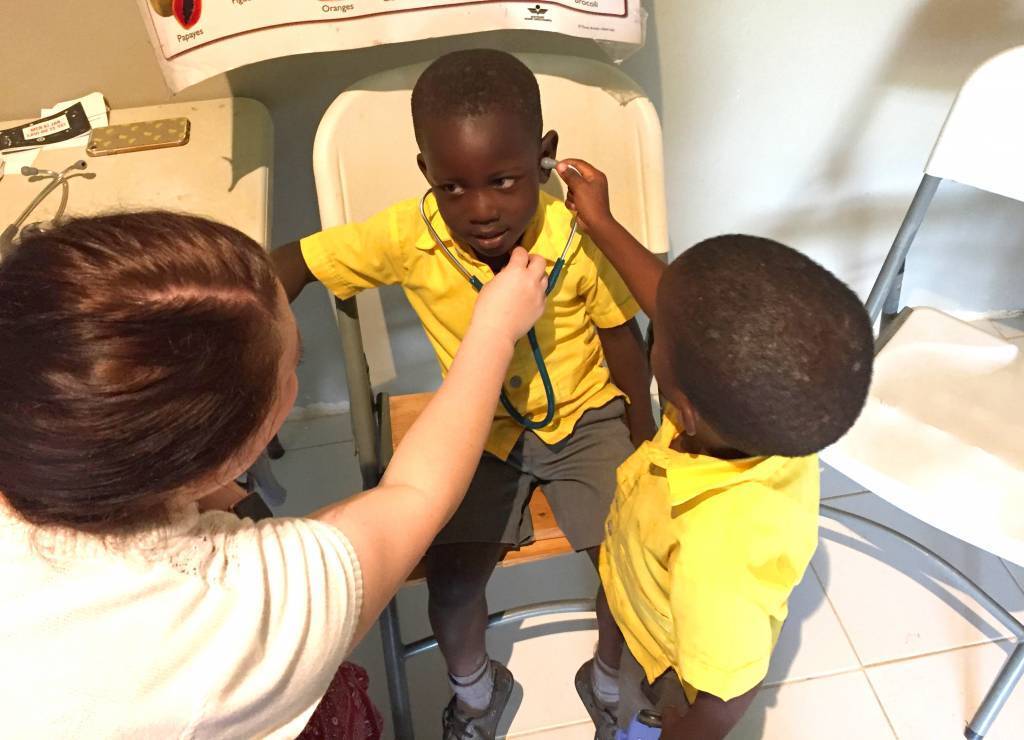 Another piece in building a healthier future for children is adult education. Creating a positive environment in which the parents feel safe to present questions or concerns is one way MH4H strives to encourage adult learning. Amanda shared of a teaching moment with a nursing mother.

A young LIA mother brought her son for a Well Child Check. Lerosane and Amanda quickly determined that the baby was suffering from “Failure to Thrive”, not making the one percentile on the WHO growth charts. As the two medical professionals spoke to the woman about her breast-feeding habits, an obvious solution was quickly spotted. The new mom would only nurse her son for a few minutes on each breast before allowing the baby to fall asleep. This gave the infant a soothing pacifier but didn’t allow him to receive vital nutrients as those few minutes weren’t sufficient to signal his mother’s milk to “let down” (After 2-3 minutes into nursing, a mother’s body receives signals to release the milk).

“Well Child Checks reinforce what the mothers are learning in their weekly classes.”

This was the perfect opportunity for Lerosane to step in with helpful tips for the inexperienced mother. In the months to come, the baby received weekly check-ups to track his progress. Happily, the boy is slowly gaining weight though he remains on MH4H’s watch list with two other children suffering from “Failure to Thrive.” 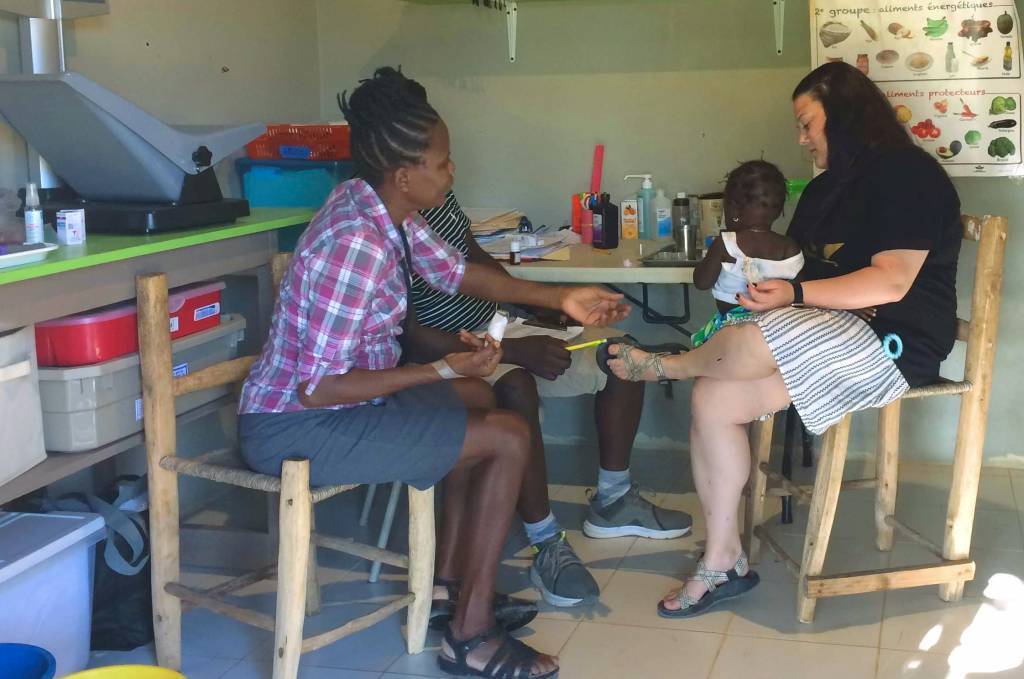 Amanda and Lerosane speaking with a father 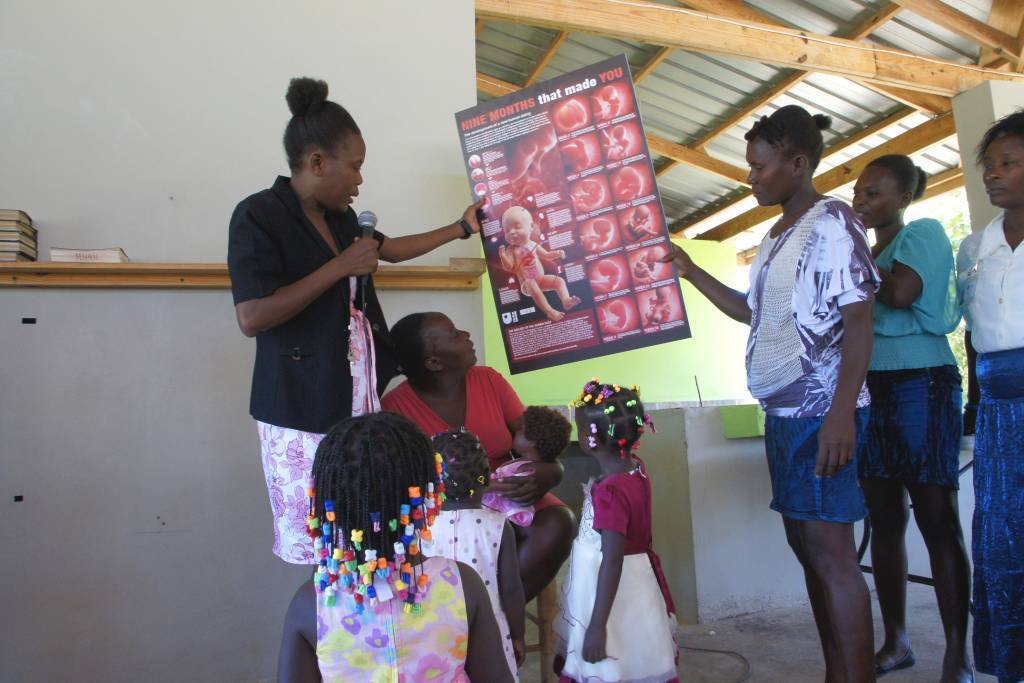 According to OCHA’s Humanitarian 2019 Response Plan, the most vulnerable members of Haitian society include single heads of households, pregnant and lactating mothers, and children under 5 years of age. As every family in the Love In Action Initiative checks at least one of these categories, MH4H was spurred to act, setting three specific goals for the Well Child Checks.

Goal 1 – Every child will be examined by a MH4H medical professional at the appropriate time. This means that a schedule is being arranged for every child to be seen: within 2 months after birth, at 2, 4, 6, 9, 12, 15, and 18 months of age, with annual visits starting at 2 yrs unless otherwise needed.

Goal 3 – Every child and caregiver will be prayed for at each Well Child Check. This allows MH4H staff to spiritually pour into the family and opens the door for conversations on a personal level.

“This [Well Child Check] is giving us a tool to monitor how healthy these kids really are.”

Everywhere you go in Haiti, the need is obvious, overwhelmingly so. Each year in Haiti, 69 of every 1,000 children die from various illnesses. There’s an average of 1.8 nurses and 1 doctor for every 10,000 Haitians. Haiti also sports the one of the lowest immunization rates (at 60%) in the Western Hemisphere.  (Miami Herald, 2018) (NCBI, 2015)

Yet the God we serve is mightier. When the Lord sent MH4H to Pignon, Haiti, He knew the individuals He would also call to serve there – Haitian professionals like Lerosane Devilma, American professionals like Amanda Banker, and many others who have come alongside the ministry. We are grateful for people like Amanda who lay everything they are before the Lord saying, “Tell me where to go, I’ll go. Tell me what to do, I’ll do it.” Many Hands for Haiti stands on the belief that we are called to Transform Together. We believe that by standing on this vision  we will see lasting change in this generation, and in generations to come.

Many Hands envisions a world where people transform together, through the presence of Jesus Christ, to be called people, living with purpose, unleashing God-given talents and resources to bring Good News in a broken world.