Day 1: Off to a great start

Written by the Christ Covenant Church team from Knoxville, TN.

The team left the Christ Covenant Church in Knoxville, TN Tuesday morning, July 21, at 4:30 am and finally arrived at the dorm, where they will stay for ten days, around 8:15 PM  Luggage was unloaded off the top of the 2 rented vans and a long awaited supper was ready.  It was lights out by 10:30 pm to try to sleep in the stillness of the HOT Haiti summer night.

Personal devotion time followed by breakfast was the start of the first full day in Haiti.  One of the main features for the day was helping pour a concrete floor in a house chosen by Haitian Pastor Clebert.  MH construction coordinator Burns Cesaire had made arrangements for workers and materials and the team joined in.  After kind of a slow start…the main ‘boss’ that had been hired to lead the workers walked off the job.  He was demanding more pay than what had been agreed upon the day before.  After a short time, God’s provision was evident when we were in full swing with a new ‘boss’.  Great teamwork!

The home owner is a man who lost his wife due to illness about 1 year ago.  He is left to raise 6 boys which includes twin boys less than 2 years old.   The older brothers show a beautiful commitment to helping love and nurture the baby brothers.  When so many Haitian households are made of mothers and grandmothers raising so many children without a male figure in the house, this is such an uncommon Haitian household…7 males in the house with no female presence.

The cement floor recipient family, minus 2 other brothers who came later.

The father is obviously feeling overwhelmed at his responsibility to love and provide for his family, alone.  The whole family worked hard on the concrete floor right alongside the team and the Haitian ‘boss’ and workers.  The walls of the house are in desperate need of repair.  Burns will figure what budget would be needed to see if there could be funds available to strengthen the structure with Krepi, a smooth cement finish layer, inside and out. 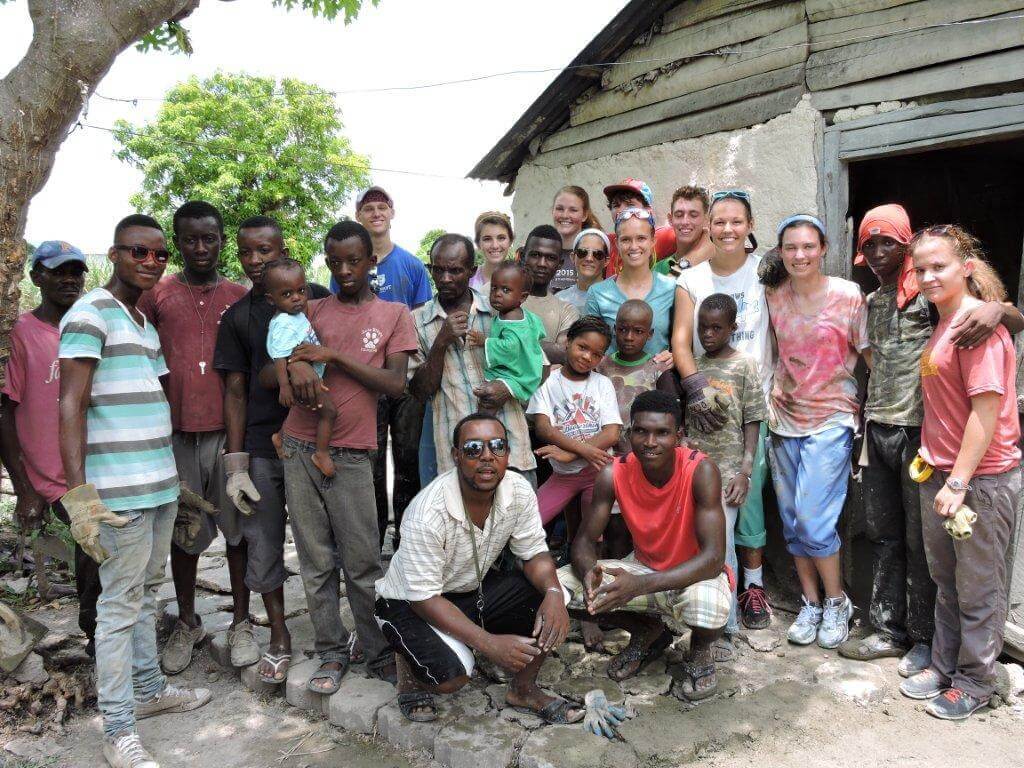 The team, workers, and family, after the cement floor was finished!

The work was done and everyone gathered for prayer asking God to bless this family!  The boss is pictured on the far left in the pink shirt.  The family is also on the left.  4 big brothers, the father and the twin babies, Burns is pictured in front in the white and black stripe polo with our translator, Devnel, just to the right.  This project involved half of the CCC team.  Next week Wednesday, the other half of the team will do another house.

After a big Haitian meal of rice, sauce, chicken legs, coleslaw, fried plaintains, fresh Passion fruit juice, and a cold Coka Cola, the whole team was off to another project.  Many Hands for Haiti is developing a piece of land in the nearby community of Sylvain.  A trench had been dug and PVC piping for a water line had been put in place.  The team worked in the HOT summer sun to fill dirt back into the trench.  Shovels, rakes, machetes and lots of neighborhood kids helped get the job done.  The kids joined right in with the hard work.  With breaks for water and shade, it was the Sylvain kids that just kept going!

God is good, all the time.

Hard work in the hot sun! Taking a much needed break in the shade, surrounded by some new found friends. Take a look at who is working in the background! We love these kids! Wait… who are these workers?! It is fun to see them jump right in with us. Finishing up the physical labor day, working side-by-side with our Haitian brothers and sisters in Christ.