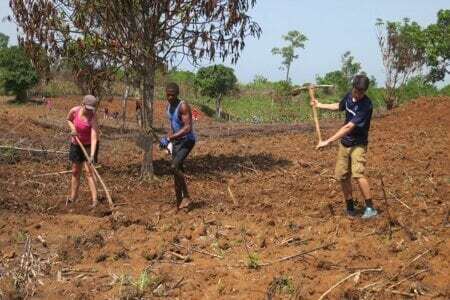 Preparing to plant in rows.

Like yesterday, we started the day off with some good ol’ manual labor. My dad, Mr. Steward, and I got up at 6:00 A.M. to go out to the MH4H Banana farm again for round two of farm work. We arrived at 6:45, and the Haitian hired help arrived shortly after. Most of the workers recognized us from yesterday’s work, and we exchanged greetings in broken Creole and English. We then grabbed our tools, and got straight to work.

Our main job was digging holes to put the banana tree roots in. It’s very tiring work, and we had many, many holes to dig. The banana farm had received about 1200 banana tree roots for planting, and that means 1200 holes to dig. We did not dig all of those, but we, along with our fellow workers, got a pretty large amount done. In some of the areas we dug in, the soil was very rocky. This made the digging go from tiring to exhausting. To work through this, we used a pick ax to bust through the rock layer. The pick ax was a life saver, without it we would have been completely stuck. The work was tiring, but rewarding.

Hoeing Sure is a lot of land!

Over the course of the last two days, I became good friends with a Haitian named Ebon. I first met him when I was hoeing the field yesterday. He is 17 years old, and is a hard worker. We communicate through a mix of broken English, Creole, and Spanish, and we understand each other pretty well. We worked together for most of the day, with me on the pick ax and him on the shovel.

Yesterday, when Ebon, Jennifer, and I were hoeing the field, we started to talk about Jesus. Ebon said he knew who Jesus was, but not much about him. Jennifer took the initiative, and asked him if he would like a Bible. His eyes lit up immediately, and he began to plead her for one. Jennifer did not have one on her, but she found one last night to give him. I had the privilege to give him the bible today, and it was a great experience. He was extremely grateful, and gave me a hug. It felt good being able to help someone find God directly, being able to be the hands and feet of God.

At around 9:30, we had to leave the farm and go back to the dorm. I sadly left the friends I had come to know over my time at the farm. It was a great experience that I will never forget. Being able to work out there with the Haitians, laboring in the field alongside them, made me feel like I was actively making a difference. It is absolutely amazing the amount of work they do everyday. They do it with a smile on their face, happy to have the opportunity to earn some pay. If there is one thing I have learned of the Haitians during my time here, it is their resilience and hard working attitude. They are some of the hardest working people I have seen. They did not simply get to leave at 9:30 like we did, they stayed there until 4:00 in the afternoon, digging hole after hole. They’ll be back at it tomorrow, ready to go.

While my dad, Mr. Steward, and I were at the banana farm, the rest of the team was at an orphanage, giving baby and infant formula to the children. From what I heard, they had a great experience as well.

After returning from the farm, we all regrouped at the dorm and went to the “mall” that had assembled outside of our dorm. Local men and women came out to sell their handcrafted items. We all had an interesting time trying to navigate our way through the mass of vendors. They would often grab you by the arm and try to literally pull you to their collection of goods. Everyone ended up buying some items to take home, so you guys will have to wait and see what we bought!

At the conclusion of the market, the team geared up and walked 20 minutes into Pignon to visit the hospital there. Being in the hospital was a very sobering experience. It was hard to see the condition those people were in. We went around and prayed for individual patients, praying for health and healing. Vicki Steward, who works as a paramedic, greatly enjoyed being able to go through the hospital and check out their medical equipment and help them in any way she could. The hospital was the conclusion of our day.

Something that has surprised me the most during my time in Haiti is the attitude of the Haitian people. Even though they live in some of the most extreme poverty in the world, they seem to have a deeper joy and contentment than we Americans have. I believe there is a lesson in that. Even though they have so very little, they accept life as it is, choosing to have a positive attitude instead of self-pity. They do not worry about the distant future, instead they take life day by day, living in the moment. I think that is something we could all learn from. Live for the moment, and live joyfully. Trust that God will supply your needs, and he will do so.

Picking mangos Admiring the mango Eating the mango! Juicy and sticky! Washing up with Rosita’s help