Roosters crow and dogs bark.  Days start early in Haiti.  Really don’t need an alarm clock.  After devotion time and breakfast our team focused on preparing a skit and activities for the Backyard Bible Club event that was planned for this morning.  We traveled by classic Haitian taptap to the community of Sylvain (forgot to get a picture today) to host 75 kids and share the love of Jesus through songs, puppets, a skit, activities, and a craft.  75 kids quickly grew to about 110 kids when word got out about what was happening.  The event was held under the shade of a new Gazebo (the cement was barely dry) built by Many Hands for Haiti on the property being developed. Without the shade it provided we may not have lasted the morning.  Summertime in Haiti!


This is the picture of the gazebo before it was completely finished. The Sylvain landscape, where the team spent the morning doing VBS.

Our new Haitian friends helped lead songs and translate English into Creole.  Harrison accompanied the songs on his guitar while Devenel (red shirt), Woody (Hat and microphone), Woodson (Red jeans), and Kenedy (not pictured) led Creole lyrics to the Newsboys song “Big House”.  Some of our team led actions.   Praising God together in 2 languages was great!  Harrison led the group singing “He’s Got the Whole World in His Hands.”  Woody knew Creole lyrics to that song as well.

The puppets made an appearance at the VBS today!

Puppets and a skit also helped us show God’s love and teach the kids about His Word and His Ways.  We made bracelets and played games. 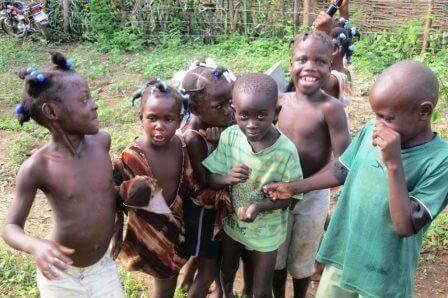 There were cold bags of water and a bag of Cheecos (like Cheetos) for each of the kids as we said goodbye.

After lunch and a little down time, the whole group took a walking tour of the city of Pignon.  Our Haitian friends came along to help show us the sites and help us understand more about the people.  We thought it was hot this morning while we were playing with the kids….this afternoon was a scorcher…even the Haitians commented about how hot it was.  When that happens, you KNOW it is hot!

Part of our tour included the chance to see a house that was built by MH4H for a family in need.  After the father died some years ago the mother of the family has been doing her best to raise her children on her own.  In January of this year the house was in very bad shape.  It literally had one wall intact.  See the before and after pictures.

Through generous donations, MH4H can provide help to many poverty stricken people in the Central plateau region of Haiti.

We had plans to go to a Haitian soccer game in a town about 35 minutes away. (about 5 miles on the rugged roads)  However as it is rainy season, the weather, and then our plans, changed quickly.  We were glad to be safe and dry.  We thank God that he has been with us and we can’t wait to see how He might continue to use each of us to show love to the Haitian people.