It has been said that motherhood changes everything. And truly it does. The joys. The challenges. Motherhood connects women of every culture and language. Many Hands’ Administrative and Marketing Assistant, Andrea Mathes, and a team of Mothers have come to Haiti to learn, connect, and share information with Haitian moms. Together they stand supporting each other, their children, and their families.

“When a baby isn’t breastfed, moms put crackers in a bottle with water, shake it up, and feed that to the baby, and because it’s white, they believe it’s as good as milk.” Stated a pediatric nurse practitioner we met on the plane to Pignon.

“Make sure you teach them that dead lizards in their bottles does not heal their babies when they’re sick, but makes them sicker.” States a man who is also on his way to Haiti to set up a nutrition clinic. He overheard us in the airport, planning for our Lactation Education conference and the details we were looking for.

Our team consists of 4 women including a lactation consultant and a nurse. We are on a “Vision Casting Trip” to determine the need for lactation education in the Many Hands for Haiti programs, and what that would entail. 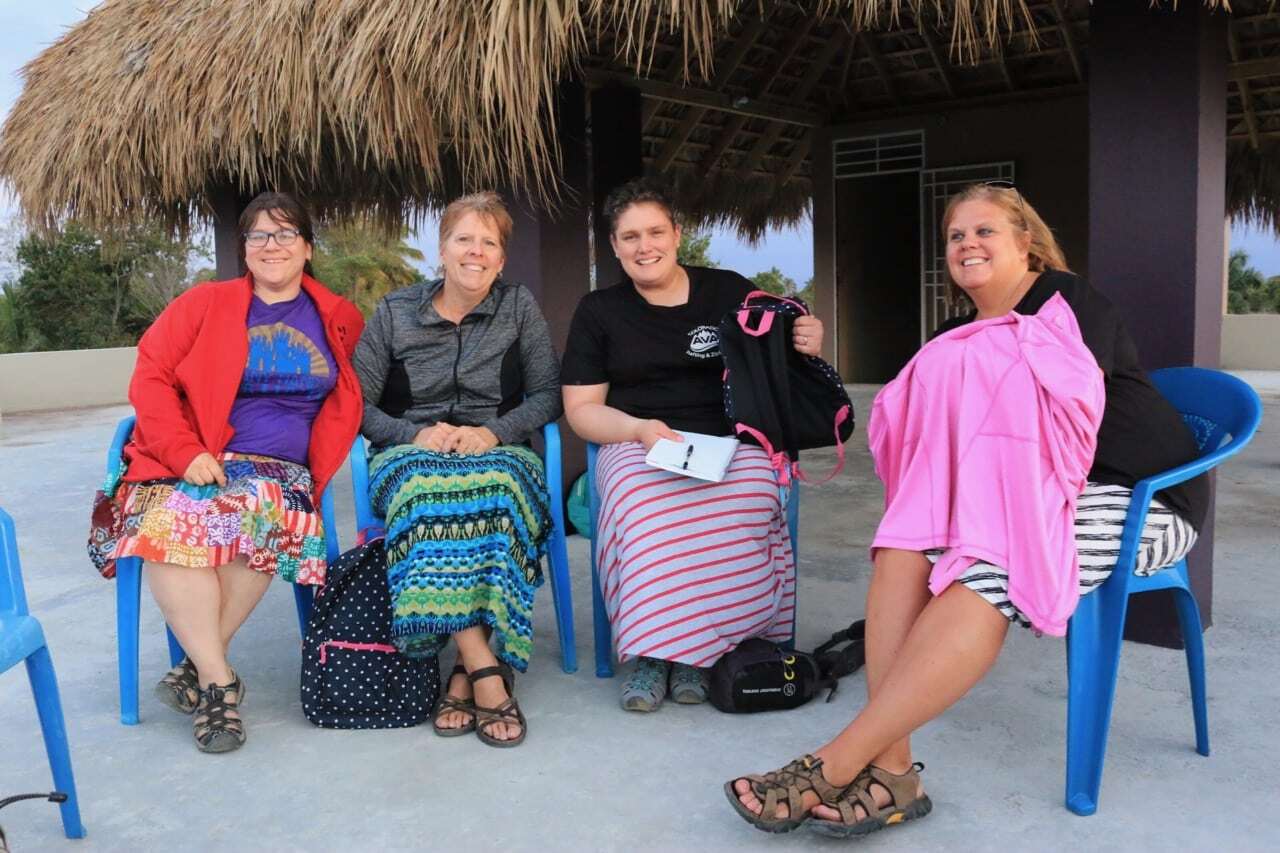 The idea of this education planted its little seed about 18 months ago, when Liz Clarke was on furlough in the United States and was visiting me shortly after the birth of my son.

After months of natural planning, filled with hopes and dreams of a smooth home birth, my husband and I faced an emergency C-Section.  Had we not come into the hospital, the doctor told us, my son and I would have died. That. Was. Eye-opening.

My plan was to nurse until he weened himself. It’s natural. Instinctive even. But my hands were completely numb due to swelling from my pregnancy, and I couldn’t hold him for more than 30 seconds.  During a three-day hospital stay, I depended on other people to position him while he nursed.

Nursing remained daunting at home without medical personnel to help me figure things out. I had no feeling in my fingertips, and my hands quickly fell asleep.  I breastfed him one out of every three feedings, pumping for the others and hoping he was getting enough nourishment. I constantly researched, trying to find answers for my questions: Is this enough? How much should a baby be getting? How do I get him to latch? How do mommas do this when it hurts so much?

When Liz Clarke visited, she told me about a Haitian woman who’d requested formula for her four-month-old. Regarding the mom, I asked, “How much water is she drinking? What kind of foods is she eating? Why doesn’t she think she is getting enough milk in?” Through this conversation, our hearts began stirring for lactation education in Haiti.

Moms in the USA have a plethora of resources and food to help with lactation and breastfeeding.  pumps, devices, and Boppy pillows can be purchased.  You can drink more water or special teas. You can eat lactation cookies or asparagus/spinach/fruit/oatmeal. The list goes on. If breastfeeding should be instinctual, why is it so hard? And if we have so many issues in a first-world country, what’s it like in a developing country?

After a month, nursing became easier. I thought, “You just have to try really hard. You can overcome it, if you make an effort.” I didn’t realize my pride or lack of empathy with other moms, until my son refused to nurse when he was nine months old.  No matter the effort, comfort or care, he was finished. I was devastated and humbled. 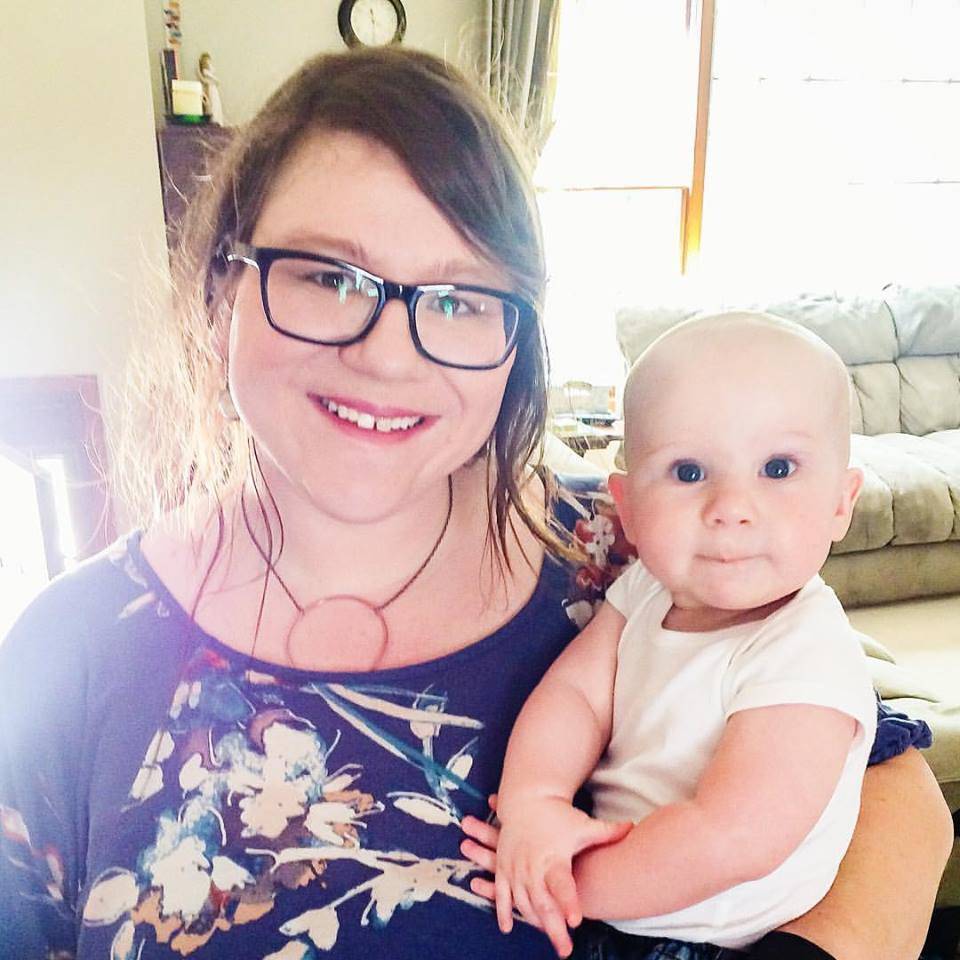 Our goal for this week is to learn from these moms, midwives, and professionals. We want to learn about their culture, how it affects this very important role in their lives, and what we can do through our Love in Action program to support them.

From the moment we stepped on the plane yesterday (Wednesday) God has been moving us along with little blessings of encouragement. This is right. This is needed. Diane, Sheryl, and Rhonda were getting off their first flight when a lady sitting in front of them pulled them aside after hearing them talk about church. They told her what this trip is for and she said, “May I pray for you?  I was wondering who I could pray for today!” and there, in the middle of an airplane aisle, while people are exiting, this complete stranger prayed a blessing over this team, this trip, and the people God is moving us to witness to and teach.

We received further encouragement at the MFI hanger while waiting for our passports to be checked. This flight was filled with missionaries who’d been involved with Haiti for years. When one family asked what we were doing, a man across the room stated, “That is NEEDED!” and then began telling us tragic stories of different breastfeeding practices in Haiti.

During the refueling in Cap Haitian, when talked with another lady on our flight who moved here to open a malnutrition clinic. She, too, confirmed the need for this, and gave us, not just the reason WHY we need to do this, but direction in some of the challenges she faced, and advice on how to overcome them. She gave us her card and permission to reach out to her as we have questions, including the willingness to share a 40-hour training guide in Creole to be used for lactation education in order to train local professionals.

So we had the call, and we had the story, but what we were lacking was the personal connection. After our arrival we helped Liz set up a “Learn and Earn” rewards room for the moms in our Mil Jou program.  Every quarter they are graded on their participation in the program. The more they are involved, the more points they receive and can buy both essentials and fun things from the rewards room.  Witnessing their first experience “shopping” with their hard earned points was a beautiful chaos. 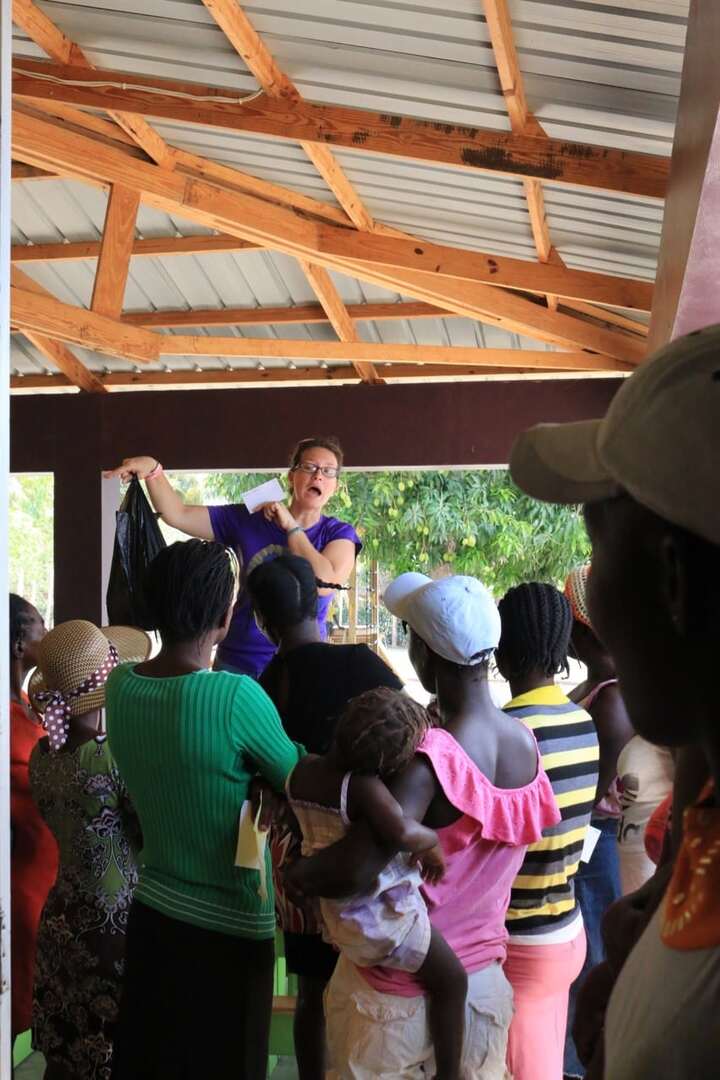 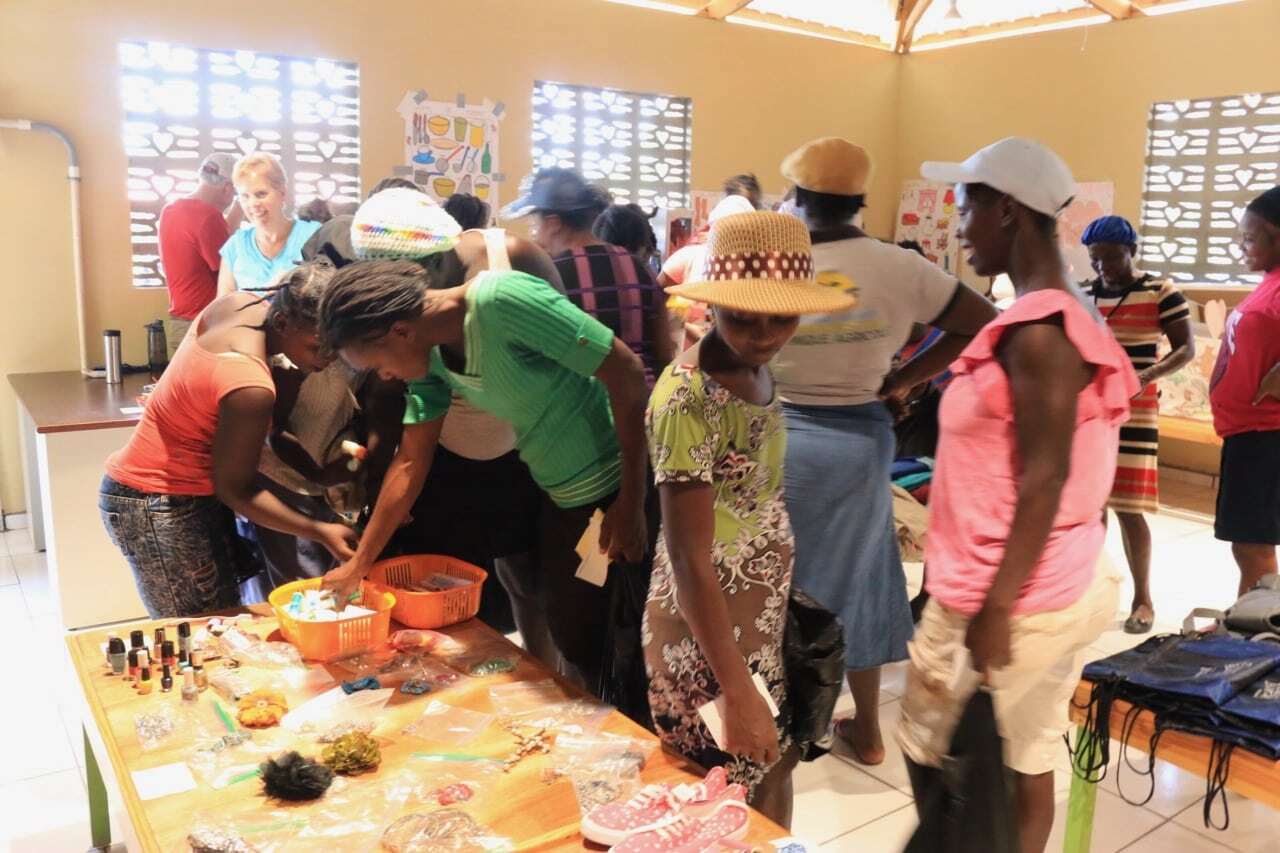 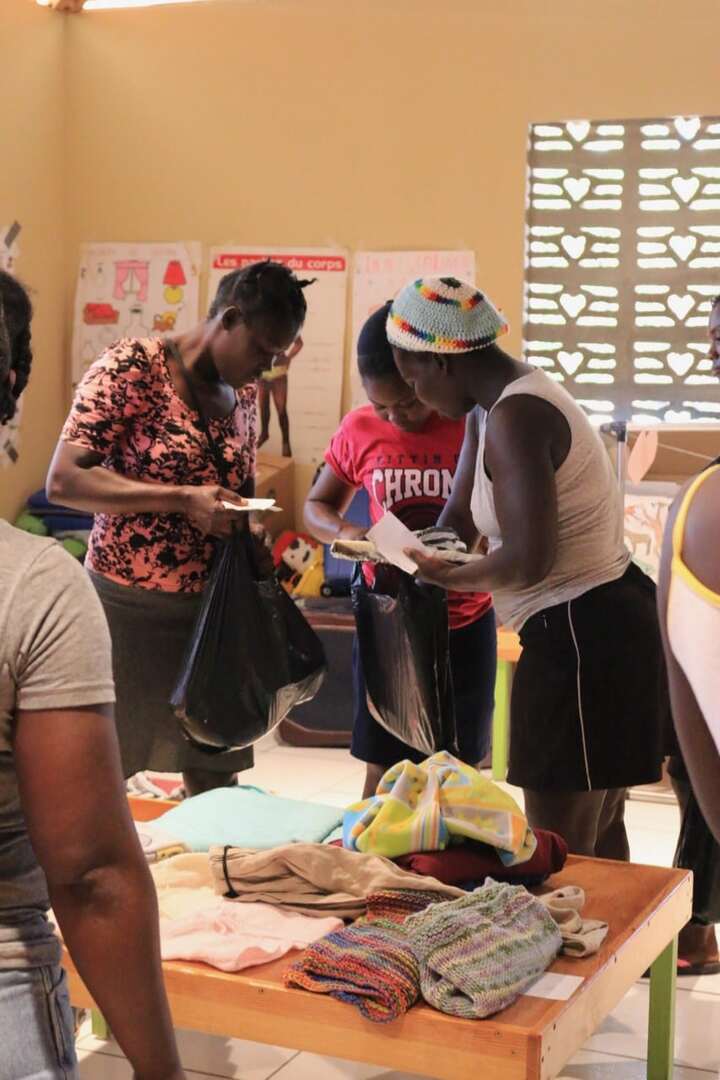 At first they filled their bags with everything they could grab. Then Liz, with the help of Jeff Thomas (our store manager in Grimes) and Sheryl, tallied up the points of each item and Liz helped them see what they could afford and what they couldn’t.  They then would return to the shelves, and begin looking at things deliberately, to see what they wanted, what an item is for, and began to really choose what they would get. They are learning. This is a tangible way for them to remember to participate.  Those who had more points got better things (laundry soap, wraps, jewelry, toys, candy), and those who had less points, went in last, and what was gone, was gone. The hope is that they would see the correlation between coming to class and earning points to spend at the store! Liz hopes to see higher grades this way! 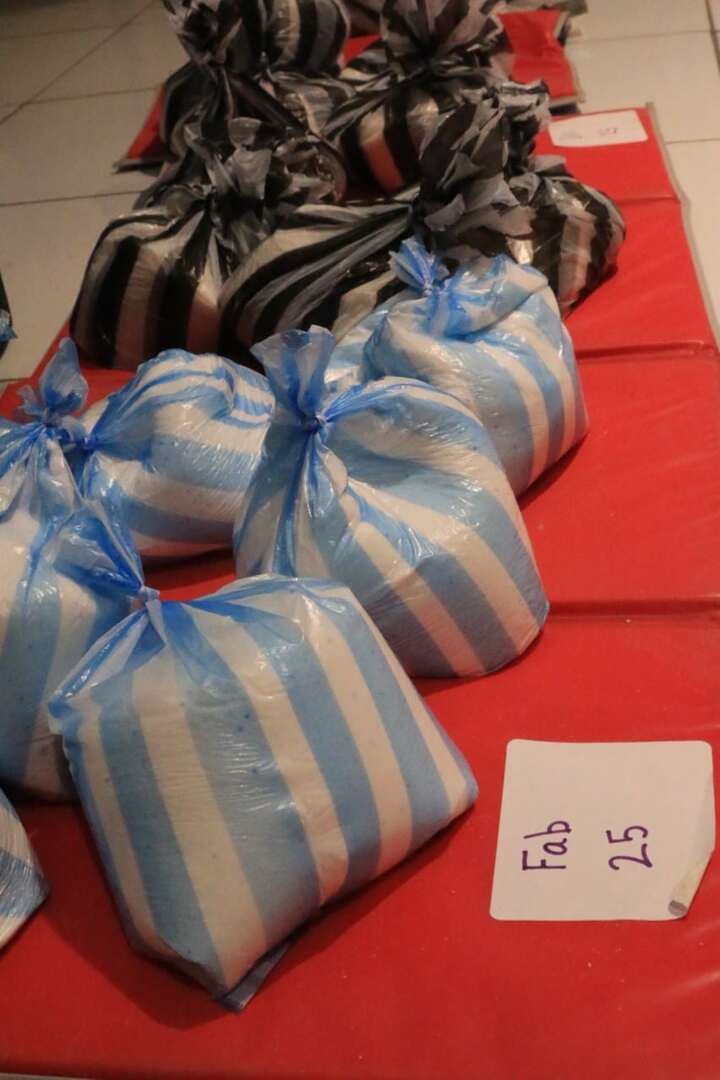 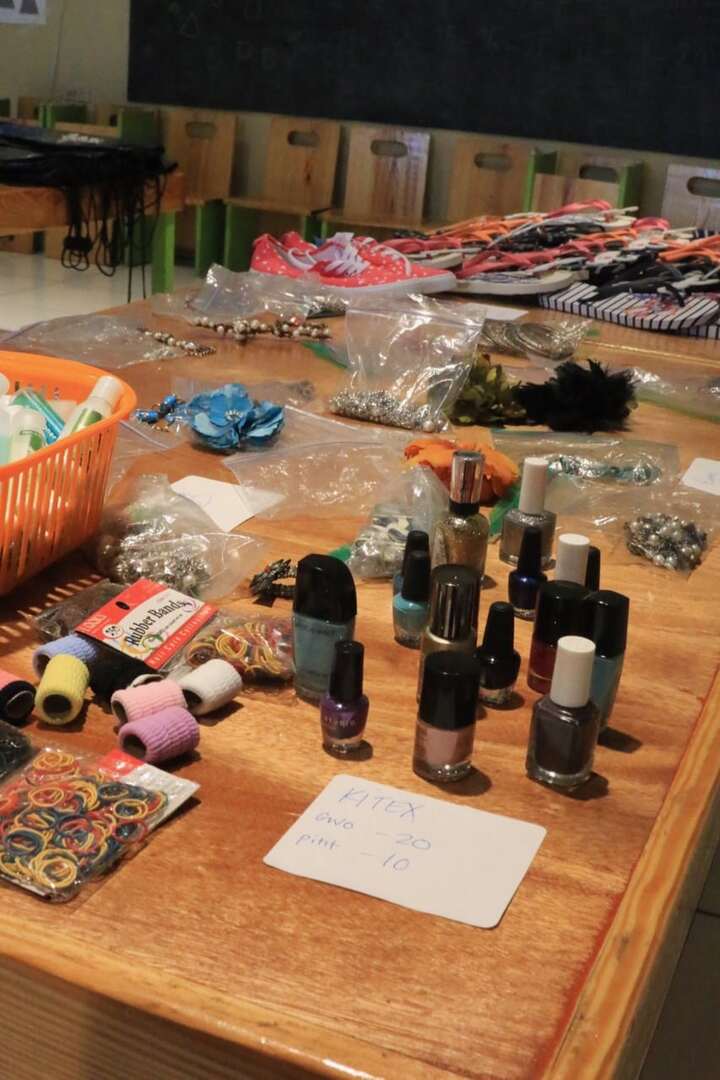 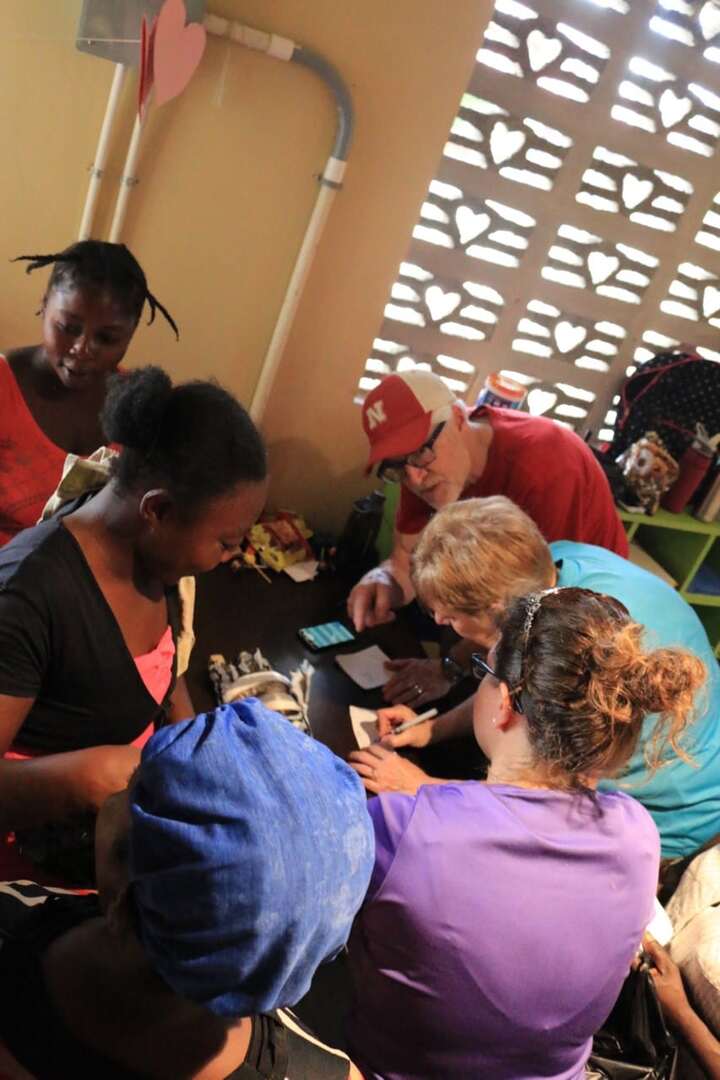 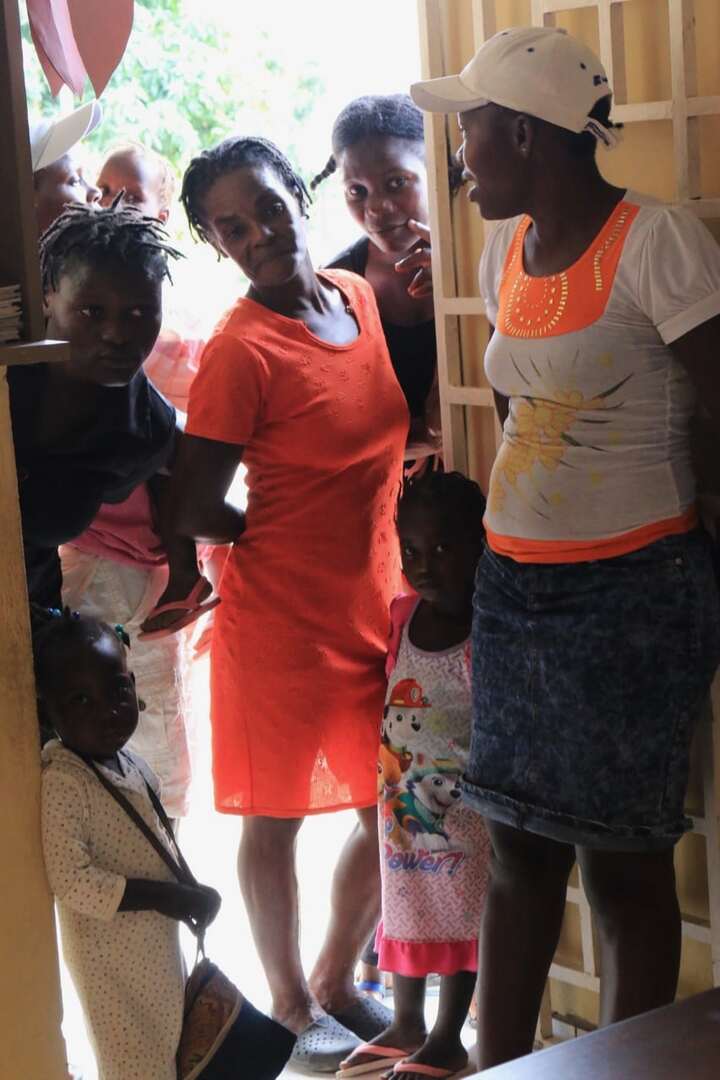 We closed up the shop, gathered our water bottles, and went to walk the neighborhood.  The moms and babies we’d just seen dressed up all over campus, we got to greet at their homes and in the street.  We were privileged to meet several new moms in the neighborhood who were not yet in the program.  Over and over again it was clear.  These moms LOVE their children. 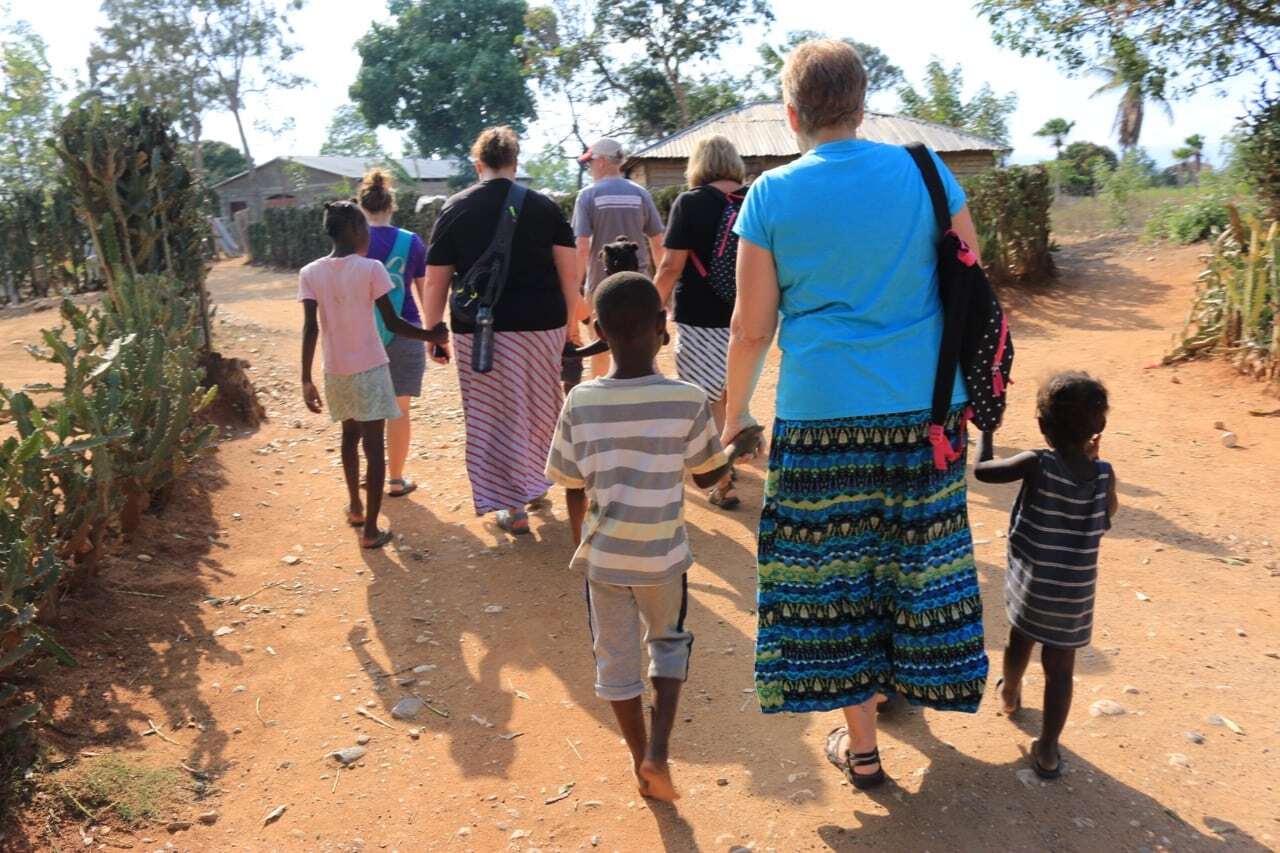 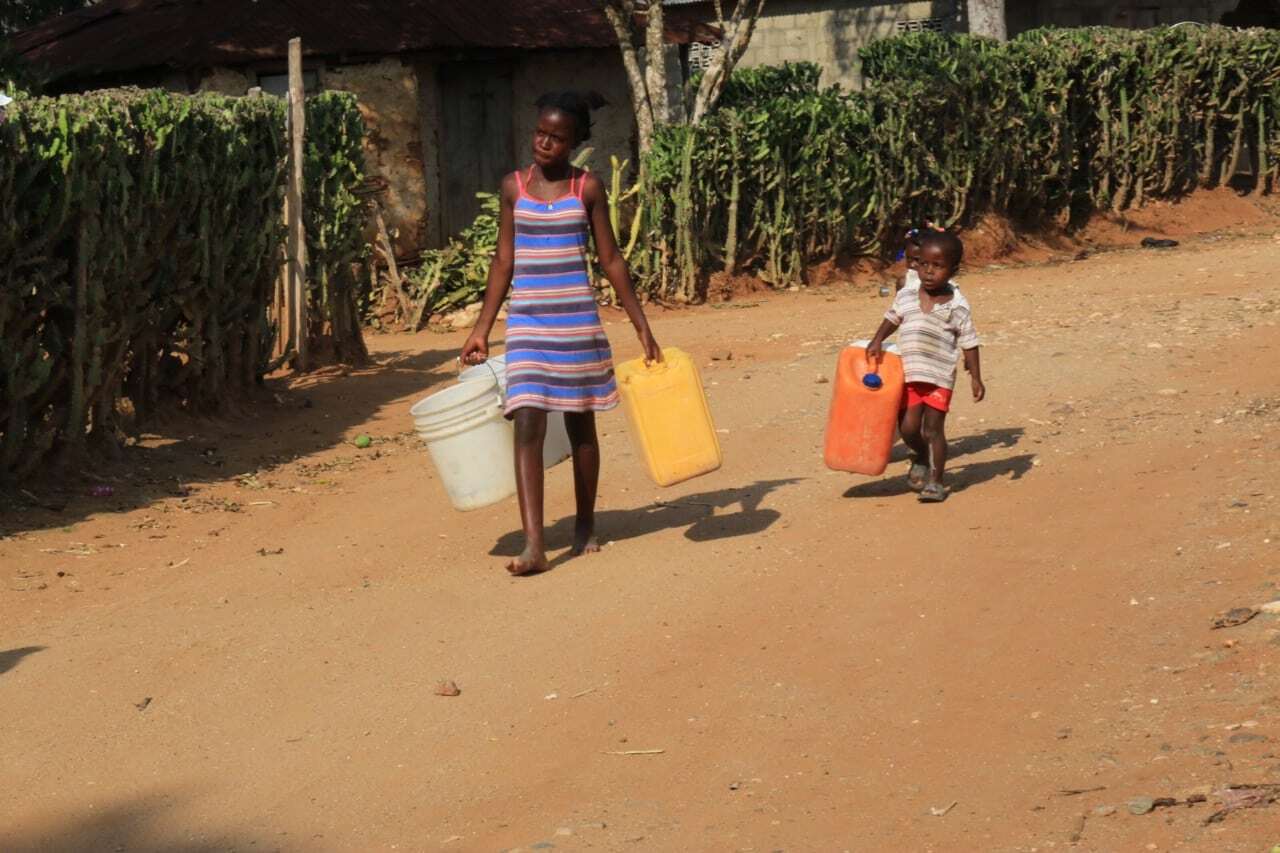 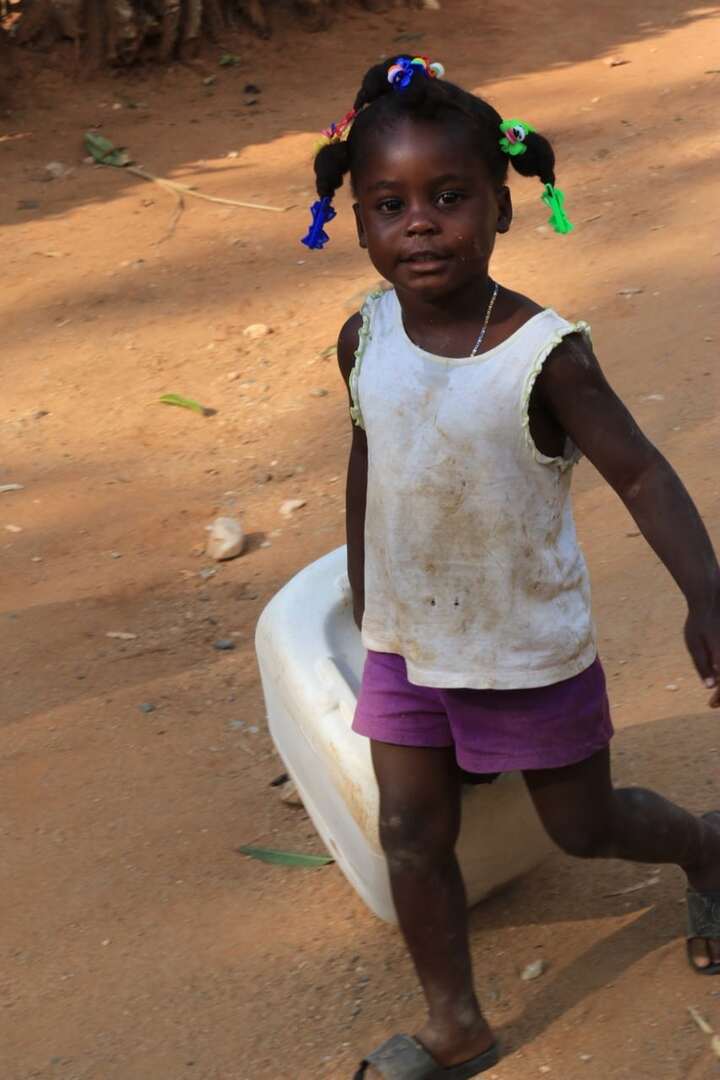 On our way back into campus a young 17-year-old approached Liz. She was pregnant with her second child. She was asking Liz for formula for her first. She had fed her first child for a YEAR, which in Haiti, is a big accomplishment. Bravo Mom! Liz asked Sheryl (our lactation specialist) if breastfeeding is okay while pregnant.  And with Liz translating, we were able to share knowledge with this mom.  She had already stopped breastfeeding for 8 days, and when encouraged to move forward to get her milk back, she said, “I don’t want to.” This is another thing we need to remember. Even with knowledge, we can only suggest and encourage, but just like in the United States, some moms simply don’t want to continue to breastfeed.  She did, however, say she would come to the conference we are holding on Monday. 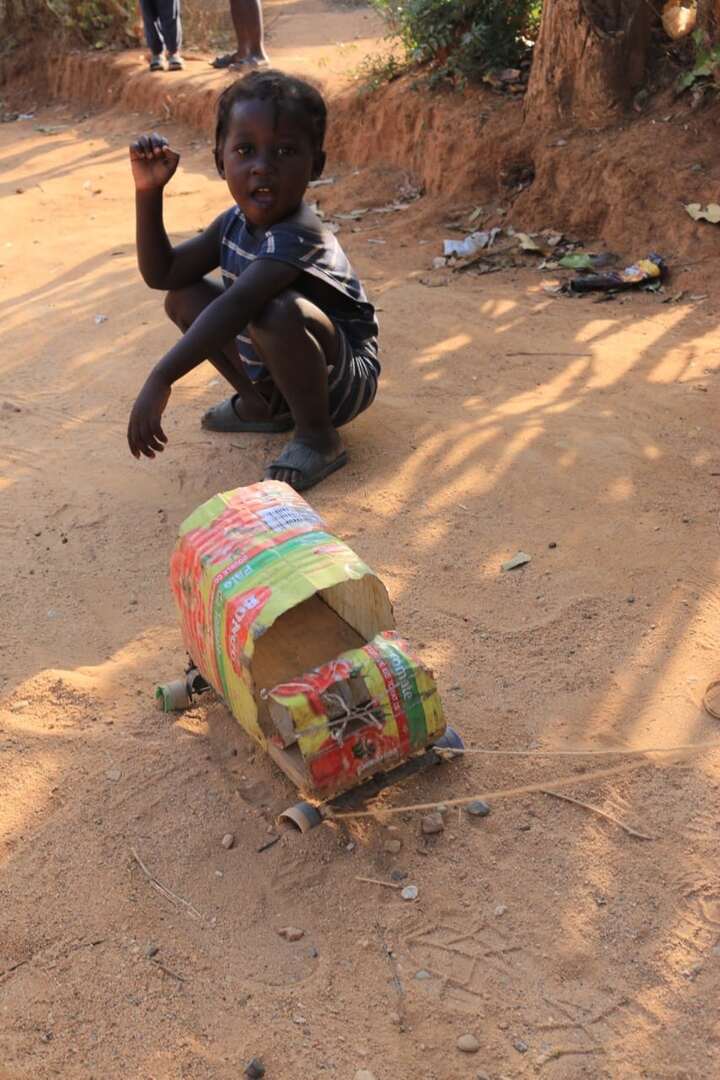 We spent the evening in devotions and conversation, adjusting our curriculum for the conference according to all we had learned and writing down questions we have for tomorrow’s meetings with midwives, missionaries, and the Love in Action workers.

We are well, family and friends. We are elated, humbled, blessed, and well.  We love you. 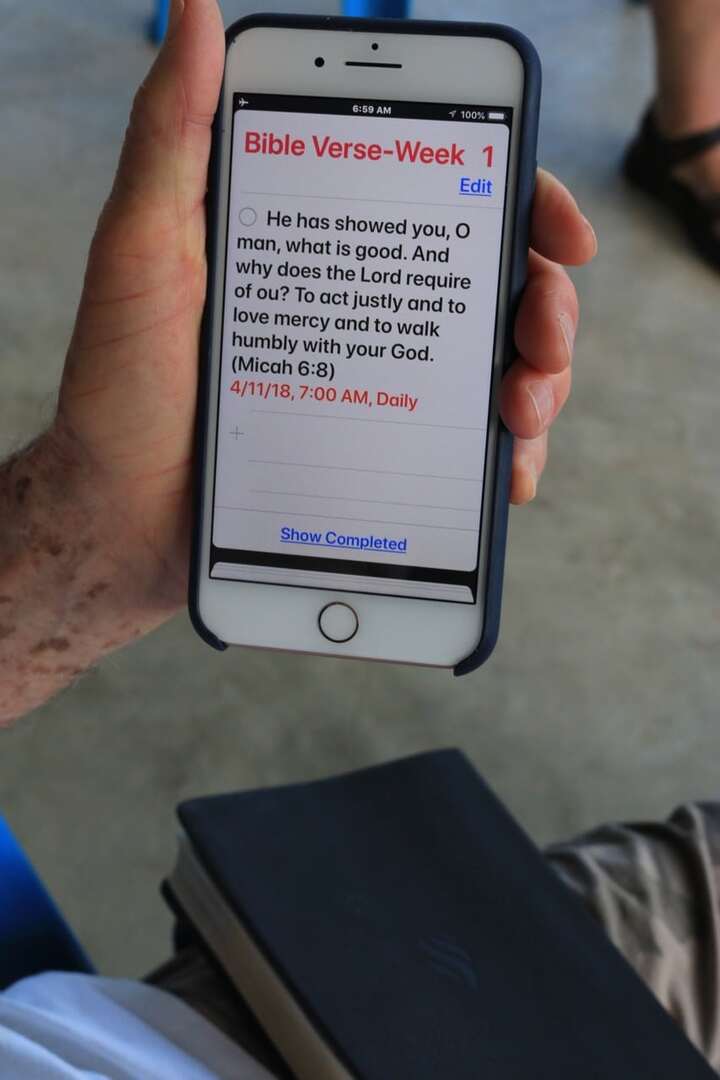 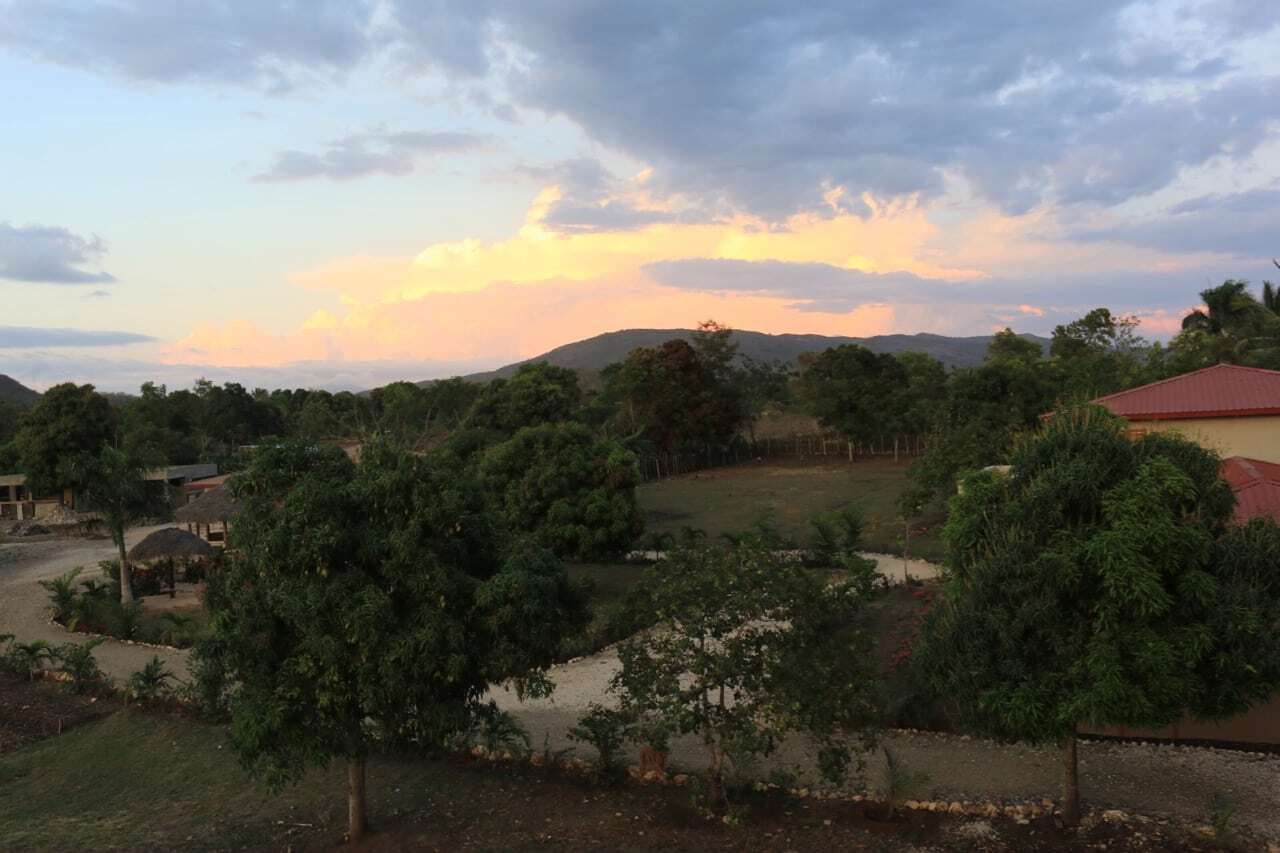