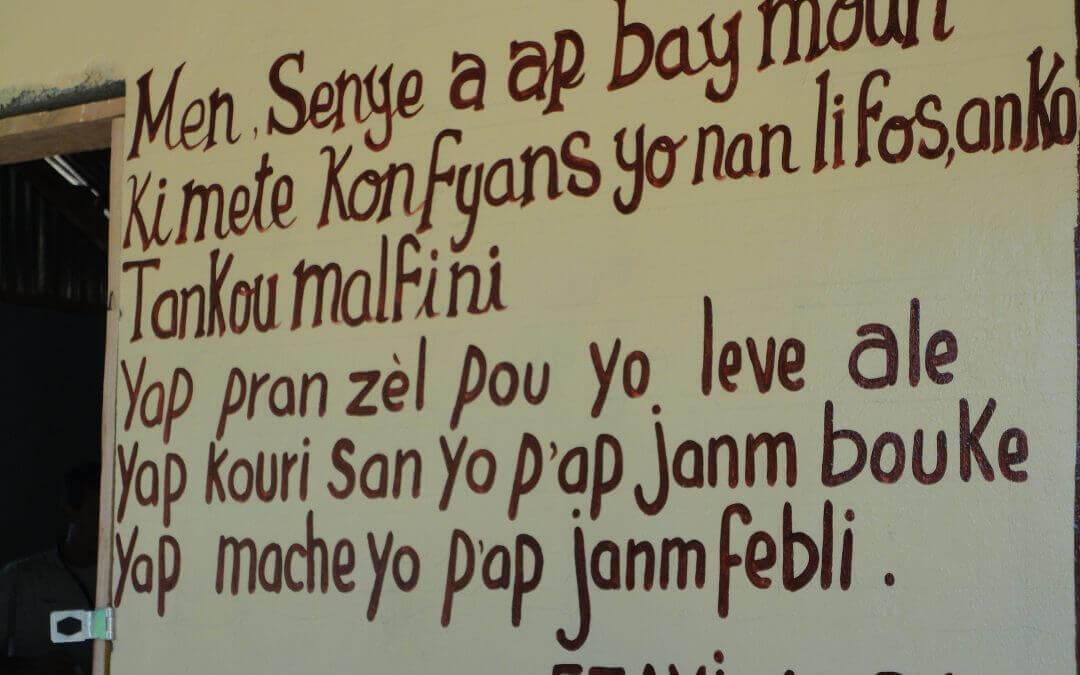 God continues to amaze me, mostly through the little things. I woke up today with a knock on my door. It was Fransley. Fransley is a now 17 year old boy that we befriended back when he was 12, and he helped with Jared and Stacey a lot. He had heard I was in town and wanted to say hi. And, I think, see if I had any breakfast! I really didn’t as I had called Beatrice, the household cook and cleaner for us when we stay at the Mission House in Pignon, the night before. I asked her to bring some bread, which she did, so we had bread and peanut butter. He was very happy with my small offering.

Upon finishing breakfast, I took the opportunity to have a Bible Study with Fransley. I had actually never done this in-country before, but we just received these new “Book of John” Creole translations and I wanted to test them out. Plus, I had just given him bread, so figured I should give him the Bread of Life as well. So I gave one to him and I followed in my English Bible. We covered John 1 and had discussions on why the book of John is written like it is, who John the Baptist was, baptism, and the Holy Spirit. I finished with prayer and then Zeke showed up.

The three of us talked for a while and then I off-handedly gave Fransley the free “tourist” magazine I was given at the airport. He ATE IT UP. He read the stories and looked at the pictures. I started asking questions and quickly realized, he had never seen these places in his own country. He had been to Port-au-Prince and Cap Haitian a couple times when Jared lived here, as Jared sometimes took him in the truck. That is it! How I forget how BIG my world is and how SMALL it can be to someone like him.

Zeke and I left and had a great morning at Pella Christian school. Things look great out there and the team has done a fantastic job with that school. The little things they had done with the painting – bible verses, letters, shapes, and pictures of Micky Mouse and Timon from The Lion King, really made the school better. We came back for lunch and I offered Zeke AND Beatrice lunch with me. I quickly realized that in all the times I have been to Haiti, the cook has NEVER sat beside me, at the same table and ate at the same time as me. Shame on me!

After lunch, we were waiting to go and look at a potential spring-water project in Pignon. I pulled out my computer and started playing some music that I had loaded. Zeke got a HUGE smile on his face and started making requests: Country, Big band, Phil Collins, Jon Secada. We just sat and played music for about 30 minutes and he LOVED it. And pretty soon I hear Beatrice humming in the background.

We ventured out to look at the spring, which is the place the whole community goes to get water, take a shower, and wash clothes. For the poorer especially, this is the only access to clean water. The path down to the spring is really, really bad… and dangerous. If it rains, it is impossible to navigate the slippery mud. At the spring itself, one has to jump the small creek in order to get to the nicer part and again, when it is wet, it is really dangerous. As we were navigating down, a man and woman summoned Zeke for us to come up. They introduced themselves as one of the community leaders in this poor section and they desperately thanked me for coming to visit them and wanted to talk about what they are doing. I interviewed them on my camera and said I would tell their story when I got back home. Over 150 of the community members have worked together to make the path better, but they need some materials and graders to make the steep descent work. It would be a great project, directed by them for the community, and they are willing to supply labor and work to see it done. We ended the meeting with a group prayer and they again thanked me for talking to them and hearing their story.

I ended the night with dinner. The day before, I asked Zeke and Bebi to come to the house for dinner that night, as eating alone is no fun and I had plenty of food. Plus, both of them have been doing an awesome job and I wanted to show them my appreciation. As we drove to PC school, we ran into Bebi’s mom and knowing Zeke and Bebi live with her, I invited her to come. About 30 minutes before the meal, Fransley and Woodson (the duo) stopped by. Zeke had to leave, as the truck had something that needed to be fixed, so no one really spoke English well. Dinner was ready and soon, my dinner of two had turned into a dinner for 5. I asked Beatrice to join us and then we had 6, with no Zeke! And it was wonderful, as we had plenty of food to go around. As we were eating, I realized that for many of them, eating together around a table is not normal. Houses are not big enough for tables, let alone for 6. What a treat! I also found out Bebi’s mom had never been to the house or had been offered a meal like this from someone visiting from the US, so she really got a kick out of it.

As the night drew to a close, I realized how much I have screwed up on the little things. None of these things I did today were huge tasks. They didn’t require major life-adjustment for me. Just me slowing down enough to listen, loving enough to reach out, and faithful enough to know our God is a big God and He is responsible – I just need to make myself available. And I mess this up ALL the time – in Haiti and especially at home. Many times, I don’t offer small tokens of hospitality, a kind word, a giving spirit, or a joint prayer. Thank you God for hitting me with a baseball bat to the head today about YOUR little things. Help me be slower, bolder, and more diligent about what it is you ask me to do each and everyday, especially the little things.