Today our family had the thrill of meeting the young boy that Christy’s parents sponsor in the name of their grandchildren. We met Fedlin at a beautiful mountain school. He is adorable! We were able to see his school and his home. We gave him some gifts and brought his family some meals. Evan also gave them a solar light. Fedlin was ecstatic about that. He says that he will do his homework at night with that light. It was such a joy to meet such a precious little one. 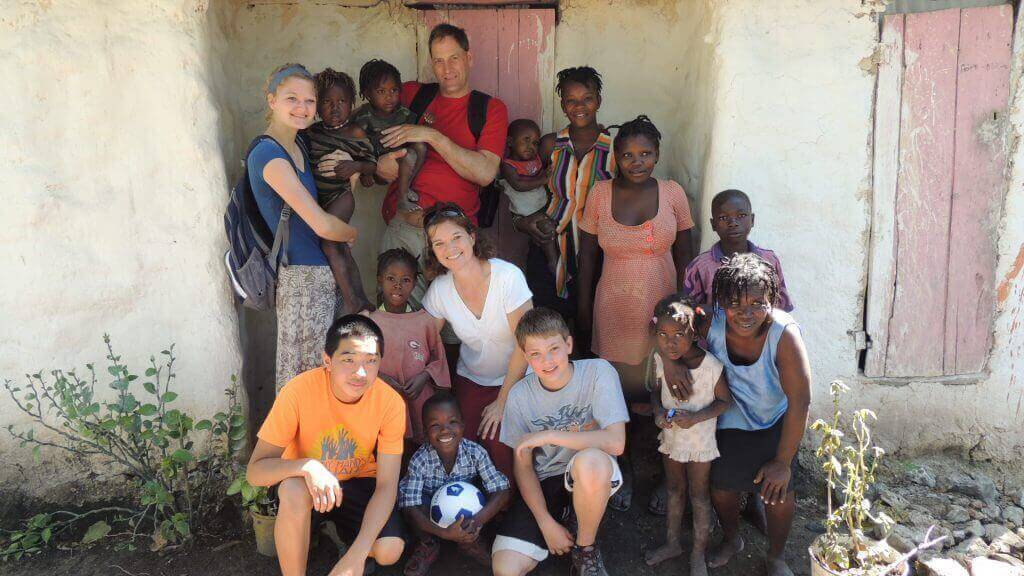 The Vande Haars with sponsor child Fedlin and his family.

We began this day serving a family by pouring a cement floor for a family. They had a four room home, and two of their little girls were a part of the Thrive for Five program. The other daughter went to Pella Christian school. These little girls were adorable, and one named Jomylie just walked around singing “A’lam Kontan” (A’lam Kontan is a common Haitian Christian song that says, “I’m so happy Jesus loves me.”) to herself. It took us a while to figure out how to make a line to pass the cement buckets, but eventually we got it down. The Haitians watching us probably got a pretty good laugh out of it.

After lunch most people stayed at the compound and did more hard labor. They got to put gravel all around the depot, but Carrie, Lucia and I headed to the hospital in Pignon. One of the Van Maanen’s sponsor girls from Pella Christian had a pretty bad infection on her foot. Apparently she cut it with a machete, and it was very swollen.

I was beyond excited to visit the hospital and actually see a doctor work in those conditions. On my previous trips, we only visited with the patients; this time I got to talk with a Haitian doctor. When Lucia squeezed little Youseline’s foot, a dark green pus came out, and she was in some pain, so Lucia wanted to bring her to the hospital, and God blessed us there.

The doctor that came was from Port-au-Prince, but he had spent 11 years in school and specialized in wound care. It was definitely a God thing and a huge blessing that a man who was very talented in this field treated Youseline. He also spoke good English, and explained to Lucia, Carrie and I what he was doing. We watched him clean the wound, give some numbing medication, and then lance the wound. I won’t go into very much detail because it could be hard to stomach for some people.

I absolutely loved every minute of watching in the hospital, and it definitely affirmed my dream of serving in the medical and mission field in the future. However, it was heartbreaking at the same time because there were many people waiting in line to see the doctor, and the hospital was so understaffed. They all would sit for hours, but there were also many people on the streets that needed to go to the hospital who simply could not afford the ride or the clinic fee to get the help they needed.

Youseline did not enjoy the lancing of her wound (obviously) because it hurt, but we got a prescription from the doctor for pain medication. We visited the pharmacy, and boy, was it different from Crown Pharmacy in Pella. I could make out what some of the medications were for, but the organization was not even organized. The pharmacists there spoke to me and were so excited that I work at a pharmacy in the United States, and they even let me help mix some amoxicillin and other oral suspension medications.

God has been speaking to my heart a lot on this trip. I thought I had learned a lot on my previous two trips, but God really has taken hold of my heart and broke it for these beautiful people even more than before. I was struggling with why I feel so compelled to come back and why I feel so joyful in this country.

There is a quote that says the place God is calling each of us is the place where our deep gladness meets the world’s deep need. I believe Haiti is that place for me.

God has definitely given me a special love for these special people. Tonight as we shared highs and lows from the day, we also shared what God is teaching us. Lucia shared that she believes that we feel so joyful here because when we are here, we are living how we are called to live. We are called to bring the kingdom of heaven to earth. This is not a calling we do in the future. It is now. When we live as God calls us to, living the whole gospel and caring for His children, we start to overflow with joy and extend compassion and promote love.

It’s pretty amazing that the people of Haiti bless me so much more than I could ever hope to bless them. They teach me so much, and I know that God speaks to me through their beautiful smiles and friendly waves. Amidst the suffering, they live with such joy, and it is that joy that God gives us when we live for His glory, serving His people, and spreading His love.

I started the day pouring cement floor for a family who lives close to the compound where we are staying. The first thing we did was fill buckets with rocks and line the floor of the house with rocks. Then we did the same process with sand and added water.

When we finally got the cement mixed, we formed a “fireman line” and passed the buckets toward the house. The first couple buckets we passed did not go smoothly. Then the man who lived at this house gave us a demonstration on how we should pass the bucket. From there on, things went a lot smoother. When we got to the second half of the house we had to move some stuff out of the house. When we were moving extra bags of cement, we found a little family of kittens. We moved the kittens outside with the mother so we could continue pouring cement. The next thing we saw was the mother cat running back into the house in a panic looking for her kittens, so then we had to bring the mother cat out and put her face to face with her kittens so she could see her kittens. Crazy cats.

After an afternoon of hard work we decided we would go to the spring just under a mile away. We brought a Frisbee, chalk, and a jump rope. As we were walking there, we gathered quite a large crowd. The kids had a blast with the toys, and they were even happier when we told them they could keep it. Most of the kids in our group jumped into the spring to cool off. It was a nice way to end a hot day.